Skip to content
Blogs CompetencyWorks Blog Building a Movement from Within

Within a system of standardized testing and teaching accountability based on student results, it’s understandable that teachers feel like they’re running an obstacle course instead of a classroom. And why wouldn’t they? Federal, state, and local standards are asking them to jump, dodge, and climb all while trying to cram years of content into 180 days. Add to that the paperwork and you get the burnout that we are seeing within our experienced teachers across the country.

It’s no surprise that when competency-education was introduced, veteran teachers rolled their collective eyes, closed the door, and continued on as usual: “This too shall pass.” However, it’s been seven years since New Hampshire included competency education in the Minimum Standards for Public School Approval. This change, which mandates students be evaluated on mastery of competencies, implies that this practice isn’t going away anytime soon. And to be brutally honest, we can’t go back to a one size fits all model; our test scores prove that it doesn’t work.

If I have learned anything about the implementation of competency-based learning over the past few years, it’s that the fire must start from within. Teachers are already feeling overwhelmed by top-down initiatives and they are beyond the point of being able to take in “another great idea.” Derek Sivers (2013) explains during his inspiring Ted Talk How to Start a Movement that every movement needs a leader to get it started. This leader can’t be administration, this leader needs to come from within. Further, Sivers explains that “a leader needs the guts to stand out and be ridiculed,” which not an easy task for most teachers. However, the best schools run on strong teacher leaders who have found success through working in environments that encourage them to take risks and promote “standing out.”

When I arrived at Newport School District this past summer, it resembled what I like to refer to as the “perfect storm”: a new set of administrators, a culture of teachers ready for change, and a budget requiring us to think outside the box. The competency framework had already been developed at various stages K-12 and the previous curriculum director had worked with the teachers to move in that direction. My job was to get the teachers back on track and build off of momentum that had already fizzled out. 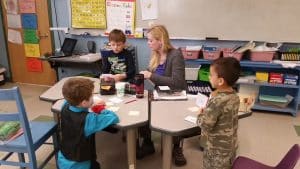 It was shortly after opening day professional development that I returned to my elementary school office ecstatic about my presentation and district vision, when one of the teachers stopped in to ask me a question: “What reading program are you going to change us to?” I stumbled for words; I was a high school English teacher who hated programs, and just explained how much I believe in teacher choice and freedom of curriculum. “I’m not. Whatever tool works best for you, I suggest you use” I explained. She countered quickly with, “Yeah, but what about fidelity?” As I walked toward the door with her I explained, “I’m a firm believer in letting teachers choose how they teach and with what, as long as the standards are met.”

Over the next couple of weeks, I realized that while the knowledge about competency education was there, the practice wasn’t yet. Teaching teams were beginning to plan out their first quarter, and debates on how this would be done were popping up everywhere. I could have made a mandate, but I knew that in order to make this transition successful, I needed a leader with not only “the guts to stand out and be ridiculed,” but the trust and respect of their peers.

Lisa Ferrigno was that leader. After attending workshops on competency education over the summer, she decided she wanted to move away from the assigned reading program and try a more personalized approach in her first grade classroom. While this could have ended the friendship on the first grade team, the other two teachers, Jen and Kris, understood her passion. Like every new idea, some of the classroom practices worked and some of the lessons could have been better created. The real benefit of Lisa stepping out on her own as a leader was that by the end of the first semester, the first grade team became her “first followers.” The buy-in had begun.

Derek Sivers explains how this helps the movement: “Now, if you notice that the first follower is actually an underestimated form of leadership in itself.” It takes guts to join the movement and change the status quo, but it was no longer Lisa standing on her own, it was a team. Suddenly, everyone started speaking up and adding to the conversation.

Jen Paquette, during the first grade team meeting, reached out in frustration and said, “I have students in my class that haven’t mastered the basic letter sounds yet, but not enough time or space to get the foundations before our reading lessons.” Kris Kidder, the third teacher on the team, explained that she has the same problem, “and now we’re starting to see the discipline problems we did in the beginning of the year.” Exhausted from analyzing the data and current practice, Jen finally said what we knew all along: “We’re doing a disservice to these kids teaching like this, what if we…” and the movement had reached the tipping point. 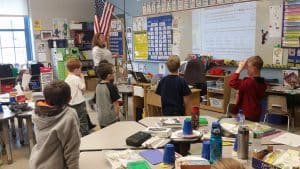 As each of the three teachers pulled out their class lists and starting organizing and arranging, you could feel the excitement; first they sorted the sixty-eight students by test scores, then adjusted based on classroom observation. As they stood back to look at the graph, they realized they were going to need more people. “The numbers are too high, the students who can’t blend isolated sounds need to have smaller group instruction to close the gap,” Kris Kidder explained to the group. So they brainstormed, and decided that to successfully go competency-based they needed to include paraprofessionals, Title I staff, and special educators in the process. The momentum was building.

Moving from the status quo often includes a lot of “yeah, buts” and other barriers. This change was no exception. When Ferrigno, Kidder, and Paquette brought everyone together and began the conversations around scheduling, meetings, planning, and “tracking,” there was plenty of concern. However, it wasn’t one person standing out there alone anymore, the three core teachers stood together and asked everyone to make a commitment to putting the barriers aside for six weeks. They asked them to join the movement, and it worked.

Four weeks later, the team of teachers, specialists, special educators, and paraprofessionals were showing positive gains and averaging an increase of twenty-four sight words every two weeks across the grade level. Some students had made more progress in the past month than they had during the entire first semester. Addressing students’ personal academic needs through competency education is working in a big way.

Lisa Davis, a special educator on the team, spoke out at a recent faculty meeting. “We’re making a difference! One of my students told me the other day that she ‘wasn’t stupid anymore’ and has not only moved up reading levels, but also gained back the confidence she had at the beginning of the year. Students are finally engaged in their learning,” she explains. “They are more confident and willing to complete work. They are excited to move around and work with other students.” 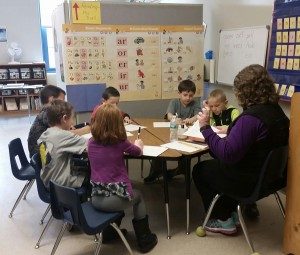 Parents are also seeing the benefit: “I like that my daughter is experiencing having to ‘try’ in school at a young age so that she is used to studying and working hard, not everything should be easy.” The parent continued, “This is the first time she isn’t getting hundreds on everything; it’s important.” Meeting students at their level has also changed the culture of first grade. Behavior referrals for this group used to be among the highest; now there are very few incidents that require the attention of an administrator. “Students are happy when they come back and can tell me all about what they’re learning,” Paquette explained. “No one feels like a failure with this system.”

This morning, I was lucky enough to see the excitement for myself. One especially reluctant reader was coloring her book when I walked over. Previously when I’ve asked her to read to me, she’s caused a scene and refused. Today, she read her three page book to me. Even more impressive was that when she struggled with certain words, she didn’t give up or yell, she went back and sounded each word out until she knew what it said. In four weeks of targeted instruction, not only has she learned how to read, she’s developed the grit needed to succeed.

The first grade team expected to see academic gains with personalized instruction, but they didn’t factor in the social and emotional gains that were going to accompany it. Confidence and positive self-esteem are just as important to cultivate in students as academics. Luckily for us, the competency framework allows us to meet the social, emotional, and academic needs of our students.

It’s difficult for any teacher to stand up and say they are not meeting the needs of all of their students. But, if you look back, that’s exactly where this movement started. Three teachers took a leap and said that our traditional way wasn’t working. And instead of listing the reasons why these students weren’t having success, they began drafting the solution – competency education.

All we can hope for now is that as the momentum keeps going that others jump in and become part of the crowd.