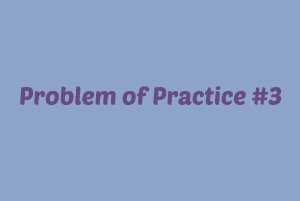 3. Designs based on student pace, not depth of learning. Quite a few districts have been designing their learning, curriculum, and instruction for kids to pass through the system as fast as they could. Students earn a passing grade (a 3 or at least a C) on something and then quickly moved on to the next thing. This can lead to a series of learning that was “good enough” but never “great.” So students are essentially doing enough to get by but not enough to excel.

This is an enormous misunderstanding of competency education. Competency education is based on three concepts, and all three are important. First, it is designed so that students get the support they need to learn. This is often captured as time is the variable and learning is the constant. However, it’s not really about time at all. It’s about what schools and students do with that time: more instructional support to repair gaps and address misconceptions, more practice, and revision until proficiency is reached. Second, it’s about deeper learning. The term competency implies the application of knowledge and skills to problems in new contexts. Thus, it pushes us toward the higher end of Bloom’s taxonomy. Third, it is about consistency. Teachers have to have moderated understanding of what proficiency is and hold it consistently for all students. Thus, we are pushing ourselves to design schools so that all students receive the support they need (including repairing gaps) in developing deeper learning.

Getting Implementation Right: One of the important processes in what is usually an early step of implementation of teachers unpacking standards is to think about the depth of knowledge and to ensure that the instruction and assessment is aligned at the appropriate level. Professional learning communities are important to create moderated understanding of what proficiency looks like at the higher levels of Bloom’s taxonomy. Thus, a foundational step is making sure your professional learning communities are healthy and supported.

One very important discussion is what does it mean to be proficient? Is a C (or what is often interpreted as 70 percent correct) adequate? What does it mean if each year, students only have 70 percent of the prerequisite knowledge? Are they going to be successful later on with those gaps? Or are they going to be passed on with gaps in knowledge that another teacher is going to have to deal with? Sal Khan argues that even students who earn Bs are at risk of missing critical sets of knowledge and skills. Perhaps instead of asking what is the cut off for proficiency, we should be asking, What do students need to know and do to be successful in more advanced studies and experiences?