Skip to content
Blogs CompetencyWorks Blog Getting Results at Lindblom 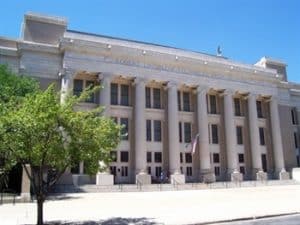 This is the fifth post in a series covering my recent trip to Chicago. Begin with CBE in Chicago.

Robert Lindblom Math and Science Academy (Lindblom) is relatively new to proficiency-based learning. They are in the third year of implementation; year one was spent introducing new practices, which were then introduced school-wide in the second year. The structures they have put into place include vertically aligning a transparent set of academic standards, introducing habits of learning, developing strong flex schedules, and implementing four-year looped advisories, universal revision policies, and standards-based grading. They are a school that is constantly trying to figure out what works best for students and is sustainable for teachers.

Lindblom is seeing results with the introduction of proficiency-based learning structures and practices. These results include higher on-track indicators, increased GPA, more scholarships being awarded, and an increase of selective college admissions. Scholarships have increased from $15 million to $55.5 million. The rate of students going to highly selective colleges increased from 15 to 30 percent, including two students going to West Point and one to Stanford. As Principal Wayne Bevis explained, “These are life-changing colleges for minority and low-income students.”

It’s important to understand the context of these results. A recent report from the University of Chicago looked at the question of whether selective schools benefit low-income kids. Their finding was that neighborhood schools were a better choice for highly skilled kids because they were able to generate higher GPAs that led to more selective colleges. Lindblom challenged that finding by putting into place proficiency-based learning structures that led to students building their skills and earning higher GPAs.

Lindblom is one of eleven selective enrollment high schools in Chicago Public Schools (CPS). Located on the South Side, the school draws students from across the city with approximately 97 percent minority and 80 percent low-income. Chicago Public Schools has structured an admissions policy based on points earned through the selective enrollment exam, grades, and NWEA scores (the minimum is 40th percentile). The result is that almost all students are on grade level, there is minimum mobility, and the graduation rate is 98 percent. Lindblom also has an Academic Center on site for seventh and eighth graders.

Lindblom turned to proficiency-based learning because although their ACT scores were consistently high, their GPA tended to be lower. It took some investigation to figure out what was going on. The school’s evaluation and assessment committee (parents, students, teachers, and administrators) began to look at the data to see where the disconnect was. Lo and behold, they discovered it was the bell curve reinforcing and creating possible bias. Even though the school had a philosophy of every student being successful, the A-F scoring created a situation in which teachers believed that a C was proficient. And as we know, the extrinsic rewards of A-F grading work well for the top 10 percent, and then essentially lose their punch for all other students. Bevis explained, “We realized that rigor was key. If we expected all students to truly master all the skills, we needed a system that supported that. The traditional grading was failing us. We had to shift the mindset that the bell curve was not needed.”

As a Breakthrough School (See article on LEAP), Lindblom had the opportunity to visit other schools. Bevis said, “Seeing other schools helped us open our minds to other models and other ways of doing things.”

One of the most first changes was a universal revision policy. Operating on the belief that students should always be able to improve and demonstrate improvement, all classes embraced revision as a common practice. Revising was a new practice for the students earning less than Bs and required substantial coaching. They immediately saw results, including impact on the on-track rate of ninth graders, moving from 86 percent to 95 percent. However, there were still academic gaps, so they asked what else they could do.

The next step was proficiency-based grading rolling out from ninth grade. After receiving training from Great Schools Partnership, teachers worked together to create proficiency-based learning (PBL) guidelines. The process of vertical alignment was designed to make sure teachers were familiar with the entire learning progression. In the alignment process, Lindblom found that there were opportunities to combine multiple standards as well as build upon the most relevant standards. They introduced student-friendly language to describe learning targets and established a 1-4 scoring based on performance-based skills and knowledge.

Lindblom understands that it is important to help students recognize the connection between healthy habits and the impact on attainment of proficiency. They’ve designed their Habits of Life Long Learners (HOLLs), building upon the Illinois Social and Emotional Learning standards (based on CASEL), to help students build their executive functioning skills. There is a focus on intellectual growth, personal responsibility, and social growth. Consistent with standards-based grading practices, they’ve separated out the HOLLs from scoring on academic progress in their grading system (JumpRope).

Lindblom realized that they need to strengthen their support to students around HOLLs. Bevis explained, “The year before we converted, we made sure there was vertical alignment in the academic standards. The habits took less priority, and now we realize how important they are. Looking back, I would consider developing HOLLs and vertical academic alignment simultaneously.” Lindblom is now investing in building their capacity to support the development of HOLLs. In a partnership with Rush Neurological Center, they have trained thirty staff on executive functioning and brain science. They have also organized classes on executive functioning for seventh and ninth graders.

They’ve also learned that scoring HOLLS in a similar way to academics (monitor and scoring) isn’t as effective as using it as a way to construct conversations at the end of each quarter. Teachers are using it as a way to engage students in self-assessments and self-reflection. In fact, teachers increasingly prefer to use a bi-model “meeting” or “not yet meeting” in scoring HOLLS, as they find it difficult to distinguish between a 2 and 3. At the parent conferences, students reflect on how they are doing in developing HOLLs. Bevis said that parents are confirming the value of HOLLs in making much more valuable conversations with their children and teachers.

The team at Lindblom have decided not to attach the HOLLs to athletic eligibility or other opportunities. Bevis explained that they are designed to build intrinsic motivation, and using them for extrinsic rewards (or punishment) actually undermines the strategy.

Each week there is a colloquium day with an advisory (students stay with the same advisor through high school), three flex classes, and a colloquium. Based on information in JumpRope, students get a weekly email telling them where they need to focus. Students then determine where they need to go during each of the flex classes to get more help or work on tasks. Bevis emphasized, “Sometimes they just need work time, and sometimes they need specific support.”

The colloquium is an enrichment course such as American Sign Language, culinary science, archery, hands-on biology with a representative from the Chicago Parks, or tutoring in neighboring elementary schools.

What Do Students Have to Say About PBL?

One student said that PBL sounds great in theory, but in practice, “it’s a lot scarier. It feels strict because the expectations are that everyone learns.” She agrees that the ability to revise is what really makes the difference. But there is a downside for her: “I feel like I have to attack revisions immediately. It feels like pressure because you can slip behind pretty quickly.” I asked if she felt like she had enough support. She was enthusiastic. “My teachers are really supportive and are willing to tutor me. My teachers are the reason I’m doing my best my best to not fall behind. They give me every opportunity to get help and get more time. They help me figure out how to get all everything done.”

Another student explained that he prefers the PBL system to the old grading system. “It shows our growth,” he said. “It feels like the grading system likes you and believes in you.” He also was very appreciative of the Lindblom teachers. “They are not like any other teachers I’ve ever had. They want to make sure you understand and they want to keep you on track. They ask me to revise until they are sure I understand.”

The Trouble with the Power Law

High schools, more than any other type of school, have pressure to convert standards-based grading into numbers that can generate a GPA. JumpRope’s grading system provides options for how this is done. Lindblom had selected the Power Law, but found it too problematic to continue using. They changed to Decaying Average in the middle of the year.

One teacher explained, “With the Power Law, it was difficult to explain to a mother why a student has 3s and 4s on everything except for one test in history and then the progress report shows a 2.” Essentially no one understood the algorithm used – this creates mistrust and frustration. Students who are motivated by getting the highest GPAs feel disadvantaged by not understanding the rules of the game. Bevis explained, “We’ve reverted back to Decaying Average due to the opaqueness of Power Law. Parent/Student surveys clearly showed a preference for the transparency and predictability of Decaying Average.” He added, “Even our math teachers couldn’t figure out how it works and incorporates trends. We’ve made the agreement that we don’t use grading systems if we can’t explain them.” No grading system is perfect: Feedback from teachers, students, and and parents is that there is too much weight on last assignment in the Decaying Average.

The next steps at Lindblom are learner profiles and building a competency-based transcript. They are interested in creating tools that provide more opportunities for students to take ownership and monitor their own learning. They are also considering creating a diploma with distinction for students who demonstrate more skills and meeting additional sets of standards.