Is competency education a reform better suited for rural and outer ring suburbs than urban districts? That’s one of the questions I get asked a lot in the back of the room at meetings. No one ever asks that question during the regular sessions, leading me to think that the question goes beyond the size of the districts, and that the question is actually asking will competency education work in areas of concentrated poverty? Or perhaps, in our racially segregated country, people are using the code word “urban” to mean will it work for African-American students?

It is true that many of the district-wide reforms, supported by the work of the Reinventing Schools Coalition, started in rural districts and have taken hold in rural and suburban districts.  However, we now have a proof point that the very same model is taking root in south Los Angeles at Barack Obama Charter School (BOCS). And they are getting results – last year they had a 150 point gain in one year based on the California Standards Tests.

Earlier this year I had the opportunity to visit the  Barack Obama Charter School, hosted by Nikolaus Namba, Chief Academic Officer at Ingenium Schools.  Mr. Namba developed his leadership in competency-based education at Adams 50 as a teacher and instructional coach.  He now brings his deep commitment to children, creativity, vision, and expertise to Ingenium to help them fully implement the model developed by the Reinventing Schools Coalition.

BOCS, now in its fourth year serving 330 students K-6, is deeply rooted in the community. In fact the community helped to name the school.  The school is tucked away under a highway in a neighborhood that has been shouldering the pain of long-term unemployment.  Upon my arrival, I was heart-struck with the warm greetings from the adults welcoming each student as they arrived to walk through the fences to their classroom in a “bungalow.” Nearly 100% of the children are classified as eligible for free and reduced lunch.  Mobility is high with 50% new students each year. Less than 10% of the students were on grade level when they entered.

I couldn’t help but gasp as I walked into a 3rd grade classroom at the number of students squeezed into the room.  And then my jaw dropped again because every one of the students were on-task.  A young lady jumped up and offered to give me a tour of the classroom. While the teacher continued to work with students, I was shown at least ten different stations in the room, each with a place on the wall where students were marking their progress.  My young guide was able to tell me where she was, what had been hard for her to learn and what she did to be successful, and what she would be working on next.  I left the classroom floating in her sense of pride and identity as a learner.  Truly a learner-centered classroom — the same kind you see in James Bean Elementary School in Maine or in Lindsay Unified High School in California.

Mr. Namba was generous with his time and helped me to understand the personalized, mastery-based approach in greater depth.  Here are some of the big take-aways:

Competency Education is a Whole School Reform:  When Mr. Namba arrived at Ingenium, BOCS had a “RISC period” once a day in which students received instruction based on their level.  The rest of the time they were organized by grade level. He explained that they are now thinking more systemically with a focus on student learning, not organizational structure and schedules.  What do we want our students to learn? How do we know they are learning? How can we document and validate when they reach proficiency?   They are creating an organizational process to support learning.

He also emphasized that “The right school and classroom culture is absolutely critical. School culture is not fluff, it’s an essential element. Our code of cooperation is solidly in place in our classrooms.”  He explained that competency education is based on a culture of asking, “What is best for kids?” and finding ways of making it happen.  “Some rules and regulations may be frustrating but they are not barriers to implementing competency education. We can always find a way to do what’s best for kids.”

I noted that in Maine, schools referred to the code of conduct, whereas BOCS used code of cooperation.  The phrase code of conduct can mean something very different in communities that have been pushed out of school based on how students “conduct” themselves.  Code of cooperation is a much more positive term and one that better captures the culture that we are all learners and we are going to support each other in our learning.

School Structures that Emphasize Pacing and Verification:  Ingenium Schools’ personal mastery approach is based on five elements: 1) Learning is the focal point; 2) Teachers as coaches; 3) Assessing students on proof of proficiency; 4) Validating proficiency through standards clearing assessments (which are administered by independent assessment specialists, not classroom teachers); and 5) Documenting progress in the educate information system.

As in other competency-based schools, extra support is provided to students every day so that there is no excuse for a student to fall behind.  In fact, BOCS is driving toward learning rates between 1 and 1.5 grade levels per year.  This is particularly important as so many students enter school already behind. Management reports have been developed that show school, class, and individual rates of learning based on the proof of proficiency as well as those that have been validated.

The emphasis on validating proficiency through the standards clearing assessments has raised a number of issues at BOCS.  Teachers may postpone verification to work with students more and to ensure that they are retaining the skills because they want to make sure their students pass the standards clearing assessments.  It has also raised deep conversations about learning.

School leadership keeps an eye on trend data about student progress, reviewing every two weeks a number of leading indicators. As the school builds experience, they are also able to start to compare trend lines across years and establish an internal benchmarking process.

A Learning Culture Starts with Teachers That Want to Learn: Having been a teacher, coach, and now school leader, Mr. Namba had many powerful insights into the implications for teaching and teachers.

In response to my question about how Ingenium Schools hires teachers for a competency-based school, he explained, “We hire teachers based on their mentality. At first we had traditional interviews and observations, but we weren’t getting the teachers we wanted and needed. Now we look for teachers who want to grow. We ask them why they are in education and their philosophy of education.  We use the Haberman Interview tool that gets to the grit of the teacher– will they do what is right for kids?  Will they push through when a student hasn’t reached proficiency yet? Will they be committed to helping students understand where they need more assistance instead of pretending they are proficient when they aren’t? If we want kids to persevere then we need to have teachers that can model it.”

He explained that there are significant changes in the competency-based model that can be a challenge for teachers that have been working in traditional schools. 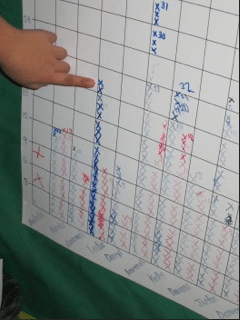 Supporting Students Behind in Grade Level Skills:  One of the biggest challenges we face in traditional schools and competency-based schools alike is how to support students that are significantly behind grade level.  Mr. Namba explained that in a grade-level classroom students may have four to five grade level differences. However, usually teachers can only effectively manage instruction and scaffolding across two to three levels .

This means that there has to be a school-level response to help students progress.  Based on the number of students learning at different levels, the schools can group and regroup students to make sure they are progressing along their learning progression. Mr. Namba explained, “When we organized students solely around levels we found it put students at a disadvantage in the state assessment system. If you have 4th graders at level 2, and only teach them at level 2, then when they take the state test they won’t have been exposed to their grade level material. We thought we would accelerate learning by focusing on their level…but it isn’t entirely true.  The state assessments force schools to address wide differentiation and emphasize scaffolding as an instructional issue rather than a structural issue within the school.”

This discussion led to the implications for teachers. Mr. Namba suggested that a highly skilled teacher can manage teaching across three levels, and that the ability to manage two levels should be expected of all teachers.  He also recommends that teachers should be proficient in teaching at their grade level as well as the one above and below.

Introducing Blended Learning into a Competency-Based School:  To date, BOCS has not invested much in blended learning. Mr. Namba felt that the school needed to develop a deeper understanding of what it takes to help students progress along a learning progression before they were ready to create online units for students.  As an example, he pointed out that Khan Academy isn’t scaffolded or fully supported for students that need to strengthen skills or need help with language. Right now, students at BOCS are spending approximately 120 minutes per week using software such as Dream Box, Study Island, and Reading Eggs, which has been helpful for practicing skills and getting rapid feedback.
—

These are only a few of the highlights of my visit to Barack Obama Charter School.  I haven’t stopped thinking about the types of metrics and management reports that can be developed to help districts, principals, teachers, parents and students stay tuned into how the schools and individual students are advancing along the learning progression to middle school, high school, and college/career readiness.  I can’t wait to go back and visit in a few years to see how the BOCS team has developed their model.