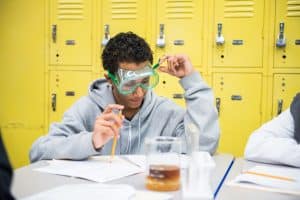 This post and all pictures first appeared at Springpoint on February 6, 2017. This is the fourth in a series on iteration in school design.

On a recent afternoon at The Urban Assembly Maker Academy, a group of students constructs a miniature car out of a shoebox and detached racecar wheels. The car holds an egg as it rolls down a ramp and two students watch their egg fly out of its cotton-ball harness; another group’s egg is crushed when it hits the bottom. The activity measures students’ mastery of key concepts in physics, like speed and velocity. Using a teacher-designed data tracking form, each group records how effectively their car ferried the egg. Some immediately begin redrafting their designs, taking their cars apart and tweaking the configuration of the components.

This is just one example of the kind of student collaboration that permeates Maker’s section of the Murry Bergtraum campus in Manhattan’s financial district. In nearly every class, you’ll find students huddled over clusters of desks solving problems in small groups. Teachers serve as facilitators, setting the boundaries of projects and guiding students along individualized paths to completion.

By spring of their first year at Maker, some students had already completed several projects to demonstrate mastery of core competencies. They had written their own series of blog posts to narrate their experience in a science project; designed and constructed Braille signage for the hallways; and participated in a “design jam” to brainstorm solutions to community problems. When asked why they chose Maker, students agreed that the opportunity to learn about STEM-based content through projects was what sold them.

Underpinning each project is a rigorous mastery-based crediting system, designed by Principal Luke Bauer and Assistant Principal Madeline Hackett. The system requires students to demonstrate mastery at least three times before they move on to the next standard or group of standards. Each demonstration of mastery is an “at bat,” and only the three most recent “at bats” count toward a student’s credit attainment. Students must perform at 80% or above on a given “at bat” to earn mastery. Since mastery only depends on a student’s last three “at bats,” a student can “lose mastery” of a given set of standards if they perform poorly on recent assessments. The system pushes students to hone their skills from the beginning to the end of each semester while sending the message that skills and knowledge are never permanently attained. UA Maker explains their approach in this series of videos.

The system took a few iterations to become what it is today. Originally, students had to complete five “at bats” to achieve mastery. When that proved too cumbersome, Bauer and his team trimmed it to three. Additionally, when ready-made tech products UA Maker launched with did not seamlessly accommodate the mastery system, Bauer’s team had to awkwardly adapt those systems to make them function properly. A few months into their first year, school leadership opted to ditch the ready-made tech solutions for a DIY combination of Google docs and hard copy records. Eventually, UA Maker hired a developer to build their own tech system, which allows students and staff to quickly access a snapshot of where any student stands on their mastery journey at a given time.

Much of Maker’s early professional development, as Bauer describes it, focused on developing open communication between students and teachers around what students know and what their “at bat” scores mean. One teacher, with Bauer’s support, has been coaching students to take ownership of their collective mastery of standards. Students are encouraged to say to themselves and each other, “Hey, as a class, we don’t know this. We’re not clear on “X” content piece, so let’s figure this out by the end of class.” This kind of self-awareness and collective accountability can only happen in an environment of transparency and rapid feedback. As Bauer describes it, “the narrative of a course” must be clear to everyone, from teachers to families.

Now in its third year, Maker’s team is working to strengthen advisory, making it a strong and consistent home base for students in a school where they are given a high level of agency and independence. “Some of our work,” Bauer says, “is making sure advisors really take ownership” over their students. The school’s leadership team has seen some examples of advisors doing just that, attending parent-teacher meetings with teachers of subjects they may not even teach, simply because the student is their advisee. This year, both Principal Bauer and College Advisory Ivy Anderson are leading their own advisories for juniors. These junior year advisories focus on preparing students for college and career. Students work on a portfolio of tasks geared toward helping them make key decisions about their futures.

Moving forward, Bauer and his team plan to continue experimenting with their mastery system. They considered “sprints,” a new schedule that would condense instructional units into three or four-week intensives. Students would only take two core subject courses at a time, working toward a single strong performance task in each. In the next “sprint,” students would switch to their next two core subjects. In addition to focusing teachers and students on bite-size units of content and time, the system would also allow teachers to teach the same four-week “sprint” twice in a row (to different groups of students). Reflection time between sprints would allow teachers to hone their plans.

Maker’s strengths—encouraging collaboration and supporting real-world application of knowledge—are a strong foundation for what comes next. In the coming years, the task of UA Maker’s leadership is to ensure that all projects are equally rigorous, and that everything students design and produce is helping them meet their college and career goals. In the words of one student, “I’ve learned it’s okay to try new things, and for it not to be perfect at first. You never make the perfect machine the first time.”