Skip to content
Blogs CompetencyWorks Blog Lessons from a Vanguard: A Look at Metz Elementary 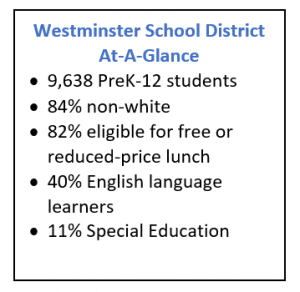 This post is part of an ongoing series on Colorado schools. Read about D51 for more insights.

Westminster Public Schools is accustomed to being in the spotlight. In 2008, Westminster became one of the first public school districts in the nation to adopt a competency-based model. In 2000, Colorado was one of the first states to adopt a school report card system. Based primarily upon standardized test results, the new law also put into place mandatory state interventions for schools and districts with persistent low performance. As the district website recounts, “after years of declining scores on the Colorado Student Achievement Program, commonly known as CSAP, the Board of Education decided the academic success of its students was too important to address through small curriculum shifts or a subtle tweaking of its programming. Instead, the district needed to radically change the way it educated students.”[1] Already looking for a more effective way to serve the districts’ rapidly changing student needs, district leadership made a bold move. Rather than pursue “drill and kill” strategies designed to quickly boost test scores, the district chose instead to implement a competency-based education model with the intention of honoring students and supporting deeper learning. This was a bold move and reflects an ethos about students and educators that continues to this day.

was the first school to pilot Westminster’s new performance based system. Beginning in 2009, the school abandoned its traditional system of age-based learning to focus instead on what they wanted for students – deeper learning and performance. The school serves approximately 340 students in grades K-5, most of who qualify for free or reduced-price lunch. Borrowing from Chugach School District in Alaska and other schools across the country that had made the move to a performance-based system, Westminster Public Schools introduced a personalized learning approach that was all its own.

Claudette Trujillo, the principal at Metz, grew up in Westminster. After a few years teaching in a neighboring district, Ms. Trujillo ultimately returned to Westminster, where she has served in multiple roles at multiple schools. When she arrived at Metz in 2013, the school had returned to a traditional structure. Despite the district’s continued commitment to competency-based learning, a series of circumstances resulted in a lack of consistent implementation at Metz. Changes in leadership and staff have resulted in teachers relying on what they knew best, more traditional models of teaching and learning.

Four years later, Ms. Trujillo has solidly re-established competency-based learning at the school. Teachers and students alike are invested in the structure and the enthusiasm is palpable throughout the school. Ms. Logsdon, a Level 4/5 teacher, describes it this way. “[Adopting competency-based learning is] absolutely the right thing for kids and it is absolutely the hardest thing I have ever done in my life.” When asked what lessons she has learned in the process, she offers the following reflection, “leadership for competency-based systems has to be there, and [leadership] has to believe in it.”

Today, thanks to the leadership and dedicated teachers and students at Metz Elementary, the school has implemented a dynamic system that is very much home-grown. The district’s brochure How Personalized Learning Works outlines the key components of the system at work in Metz Elementary. Core elements of the district’s approach include:

Metz Elementary has several tools that it uses to bring this approach to life. Rather than limit what’s possible to the confines of a traditional school schedule, Metz has designed its school schedule to directly support its instructional strategies. Some of the key design features of the daily schedule and their intended purposes include: 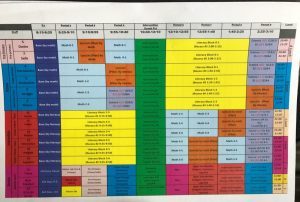 Class scheduling at Metz is an individualized process. With the support of a customized learning management system, EMPOWER, each student’s schedule is built individually. Scheduling isn’t completed until students arrive in the fall, providing an opportunity for staff to assess student’s academic performance in real time before finalizing class assignments. At the end of each school day throughout the year, Ms. Trujillo reviews student performance levels and enters promotions directly into the EMPOWER system so teachers have the information they need to adjust instruction the next day. A weekly report is distributed to the entire school staff, showing the current promotions by content and teacher. “Transparency is critical in our system due to the fact it is a district-wide initiative. Parents and students need to know where they are within the system. Student ownership is critical to developing a plan of action for personalized education,” Ms. Trujillo points out, and this kind of reporting demonstrates the school’s data-driven focus. While EMPOWER provides a valued tool to implement the school’s model, it does not replace the personal focus upon student agency and relationship. As one teacher explains, “[I] rely on personal knowledge of kids to know when to encourage them to keep working and when to step in and help.”

All of Metz’s literacy and math classes are created as “combo classes,” with multiple performance levels represented with each group of students. This enables students to move performance levels without moving classes or changing teachers. However, sometimes a student’s rate of progress during a year makes a class move necessary in order to ensure students can continue to progress. As Ms. Trujillo explains, “parents need to know and understand that movement is fluid and teacher changes are quite possible.”

While there is much in place to support successful implementation, a commitment to continuous improvement and ongoing professional learning is a key element of Metz’s structure and practice. The school hosts two professional learning communities (PLC) each week. Each Monday meeting focuses upon a three-week data cycle with content teams and interventionists. Teachers evaluate formative assessment results to deepen their understanding of student progress and gaps in learning. The second PLC each week brings together content teams from across primary and intermediate elementary teachers to dive deeply into instructional strategies. These PLC’s are in addition to weekly staff meetings that are differentiated to meet professional learning needs in real time.

While the vision for competency-based education at Metz is supported by its school district, state and federal policies have continued to create pressure for the school and district. Despite Colorado’s reputation as a leader in educational reforms nationally, its policy structures typify the tensions that competency-based systems can face when introducing new systems into traditional policy structures. Judged by a state accountability system that relies upon grade-based standardized tests, the district continues to be plagued by persistent low performance. This summer, the Colorado State Board of Education rejected an appeal from Westminster Public Schools to revise its district performance rating from “Priority Improvement” to “Improvement”. Once again, the district has rejected short-term fixes and reaffirmed its commitment to competency-based learning. “We could surely up our test scores, by giving students just enough exposure to test material to get an improved score, but that doesn’t give them the deeper learning that goes to the heart of competency-based systems,” said Dr. Pamela Swanson, Superintendent of Westminster Public Schools. “All of our students can achieve at a high level, but only if we give them time to fill in the gaps in their learning.” In response to pressure to perform from the State Board of Education, Westminster will deepen existing partnerships with AdvancEd and Marzano Academies to support instructional practice. The intention is to do so in a way that both satisfies the state’s expectations while supporting the competency-based approach.

Leading change can expose one to failures. However, these bumps in the road have provided Westminster with valuable learning opportunities. Almost a decade after first embarking on a shift to competency-based learning, Metz Elementary and Westminster Public Schools continue to learn and refine. This past summer was spent sharing instructional tools developed within a classroom to become embedded across the school. No doubt a new school year will bring new challenges and new lessons. Nonetheless, the district remains committed to competency-based education for its students. In September of 2016, the district Board of Directors released the first long-term vision plan for Westminster Public Schools, Vision 2020. The plan reflects the district’s philosophy that “the most important day in a student’s academic career is, the day AFTER graduation.”

Nina Lopez is an independent consultant, based in Boulder, CO. Nina provides facilitation, strategy and innovation design services to private foundations, non-profit and government entities in Colorado and throughout the country to help them incubate new initiatives, develop a shared vision and a clear strategy for achieving individual and collective goals. www.ninalopez.com