This is the fourth post on a series about McComb School District in McComb, Mississippi. Start here.

Sometimes enthusiasm for an idea can create unexpected terrain to navigate. For example, several of the McComb board members’ enthusiasm resulted in expectations for immediate roll out to everyone. Why not? If it is good for children, let’s do it now.

Drawing on his experience in previous improvement efforts, Superintendent Cederick Ellis believed that a roll-out strategy was needed. He was hesitant to begin with high school, having seen so many high school reforms come and go without taking hold. He explained, “It was going to create extra pressure if we had to change the mindset of scholars as they entered ninth grade. And as soon as we would help them fully build up the independent learning skills, they leave us – we don’t have opportunity to reap the benefits.” Thus, McComb began with an elementary school roll-out and -up strategy, with the knowledge that high schools would be enrolling a different type of scholar – one who owns their own education.

McComb School District used a pilot strategy to launch their transformation to personalized learning and are now transitioning to a roll-up strategy. 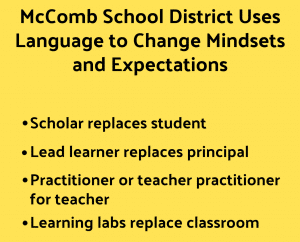 McComb wasn’t interested in piloting in a few classrooms at a time. They established Summit Elementary School, a new K-4 school as the beacon school. Previously an alternative school, the building was renovated for young children and a new principal and practitioners were hired. Ellis took the hiring very seriously, engaging community members in the interviews, giving scenarios and asking applicants how they would handle them, and asking applicants to give examples of how they use data to inform instruction and professional learning.

Demand was high in the community for the new school. McComb didn’t want any “cherry-picking”; they wanted to develop a school that was going to be effective for every scholar. Thus, they opened a lottery process for the 250 students who entered the school in fall of 2015. There are currently 316 students in the school, with 25 in each learning lab.

When the district later opened the Kennedy Early Childhood Development Center for kids from birth to kindergarten, Summit then shifted to starting at first grade and began to add an additional year each year until it became grades 1-6.

The second step was to introduce competency-based education into the Kennedy Early Childhood Development Center’s kindergarten class in 2016 . This is brilliant, as it introduces a “meeting students where they are” approach that is much more developmentally sound than expecting students to meet the Common Core kindergarten standards in their first year of school. As any kindergarten teacher knows, students are entering school at very different stages of physical, cognitive, and emotional development with a range of different experiences in formal settings. Thus, kindergarten is an intensive developmental experience as well as way to introduce students to the concept of school.

McComb’s personalized approach expects practitioners (teachers) to begin introducing scholars to the core mindsets and skills early on to take ownership. In addition, the intentional focus on standards in competency-based education brings opportunities for collaboration among practitioners to help scholars reach early childhood developmental benchmarks as well as the Mississippi academic standards. Please note: Mississippi has kindergarten readiness assessments that define standards for what students should know and be able to do before they get to school and what they need to learn in their first years of school. What is a bit concerning is that there are actual state assessment tests taken by all kindergarteners that are used to create a statewide picture of school readiness. This could theoretically be helpful as a baseline upon which to create growth models, but that is not how it is currently being used.

Step #3 Rolling Up the Transition from Traditional to Personalized Learning

McComb is now beginning the third step of introducing personalized, competency-based education into schools that have been traditionally designed up until now. McComb is starting the transition with the first grade at Otken Elementary in 2017 and rolling up from grade to grade…until they reach the high school.

Establishing new schools always has its challenges, but the ability to select a new team makes it much easier to introduce the new beliefs and culture of competency-based education. Any type of transition requires much more engagement with teachers and administrators to provide an opportunity for them to do their own learning. In addition, strategies are needed to introduce new practices without demanding compliance.

In the next article, Summit Elementary’s model will be highlighted.