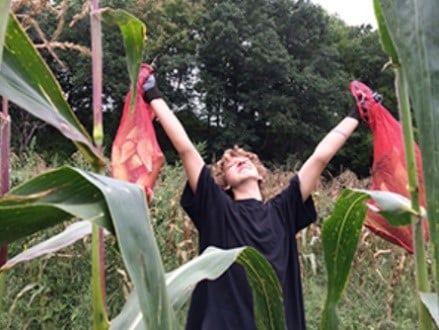 CompetencyWorks recently received this inquiry from an administrator of a school that was working to deepen its competency-based learning practices:

One question we are thinking about is how to honor academic achievement and progress in proficiency-based grading/reporting. We are finding, for instance, that naming students to an “honor roll” for Quarter 1 is a difficult fit for a system that intentionally honors growth over time. Are there new or different ways of honoring academic achievement and progress that are emerging as schools transition to proficiency-based systems?

This is an important question that many people in the field are grappling with. The challenge is in part because “honor roll” feels like a vestige of the ranking and sorting mechanisms of traditional grading systems. At the same time, competency-based systems are developing ways for students to achieve and demonstrate deeper learning, as well as ways to recognize these achievements. The field doesn’t have a single way of approaching this, but there are some emerging strategies and ways of thinking about it.

The following quotation from Steve Lavoie, written while he was principal at Richmond Middle/High School in RSU2 in Maine, recognizes the tensions in transforming between traditional and competency-based practices. He wrote on CompetencyWorks,“Decide what issues are critical and that you’ll ‘go to the wall for.’ You will be faced with questions that tie to the traditional system. Expect them and decide ahead of time whether or not you are willing to ‘die on that hill’ prior to the question being asked. Questions relating to GPA, class rank, Top Ten, and honor roll should be anticipated. Your stakeholders may believe they are important components that should be retained. Issues like these feel like trying to fit a round peg into a square hole, but they are not critical issues that should interfere with the implementation of the big picture. They can be made to fit your program. Be prepared to give in on some issues but stand firm on the critical ones like your core belief that all students need to demonstrate proficiency on all standards required for graduation. That would be the hill to die on.”

In the CompetencyWorks Issue Brief, Progress and Proficiency: Redesigning Grading for Competency Education, Chris Sturgis wrote, “It’s unlikely that the need for ranking will ever be absolutely obsolete.
Highly selective colleges and those who want to attend them are going to want to be able to identify the ‘best students’ through some mechanism that recognizes distinction.” In the same issue brief, Brian Stack, principal at Sanborn Regional High School in New Hampshire, asks, “Why not instead set a bar that you will use to distinguish an ‘honor graduate,’ and any student who is able to reach (or exceed) that bar gets the distinction at graduation. From year to year, the number of honor graduates will change, but the standard never would. Every student would have the opportunity to be considered an honor graduate, provided they meet the requirements.”

Here are a few examples of schools that use honor rolls within CBE systems: 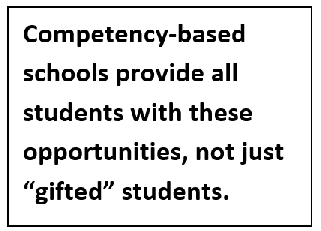 In addition, some schools have ways of recognizing students who have achieved deeper levels of learning. Competency-based schools provide all students with these opportunities, not just “gifted” students. In Rose Colby’s book Competency-based education: A new architecture for K-12 schooling, she provides several examples of grading scales and definitions (Chapter 7) that could form the basis for honoring academic achievement and progress in proficiency-based grading. For example, “The student consistently exceeds the performance standards for the grade level. Understands and applies key concepts and skills with consistency and effectiveness.” The Mastery Transcription Consortium is also developing ways to recognize students who have developed “Foundational” vs. “Advanced” competencies.

Schools have developed a variety of innovative ways to recognize outstanding achievement. In a session I attended at SXSW EDU in March, a presenter explained that his school allows students who have gone above and beyond, or who have developed amazing projects or products, to audition to present their project to the whole school. (This includes projects that they have done outside of school, which makes great sense within a competency-based model.) Students at Big Picture Learning schools often do in-depth work through internships and other projects, and they are able to present their work during quarterly exhibitions and during the school-wide “pick-me-up” meeting that starts each school day. Four Rivers Charter Public School permits both students and staff to nominate students for Polaris Awards that recognize outstanding student performance in relation to the school’s six character virtues.

A student’s level of progress, rather than their level of achievement, could also be a focus of recognition. Chris Sturgis wrote on CompetencyWorks, “…districts and schools do need to put into place the structure to allow students to achieve at high levels and be an over-achiever. We also need to make room for those students who may not be at the highest grade levels but have shown the greatest growth. They too are high achievers.”

Many competency-based schools are undoubtedly addressing these same issues in additional ways not mentioned here. Your strategies and reflections in the comments box below would be greatly appreciated, or email me at elevine (at) inacol (dot) org.