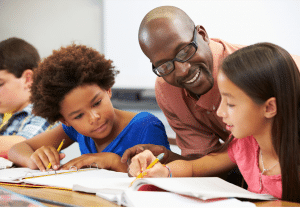 This post originally appeared at Getting Smart on December 22, 2015.

Agency is the capacity and propensity to take purposeful initiative—the opposite of helplessness. Young people with high levels of agency do not respond passively to their circumstances; they tend to seek meaning and act with purpose to achieve the conditions they desire in their own and others’ lives.

A new Harvard study, sponsored by the Raikes Foundation, suggests that student agency may be as important an outcome of schooling as basic skills.

The report, The Influence of Teaching Beyond Standardized Test Scores: Engagement, Mindsets, and Agency, relies on the Tripod survey of teaching. Over 300,000 students in grades six to nine in 14 states were surveyed during the 2013-14 school year.

Developed by Ron Ferguson 15 years ago, the Tripod construction appears more relevant to traditional teacher-centered classrooms than student-centered approaches. As a result, there are some limitations of an instrument designed for measuring agency in low agency environments. However, next generation Bay Area models including Summit Public Schools and Education for Change (EFC) find the survey useful.

“Where this report is effective is in pushing us to think about agency in the context of what grown-ups have to do to facilitate it,” said Hae-Sin Thomas, CEO of EFC. “Tripod unfortunately is not a tool designed specifically to evaluate teacher practice specific to agency, but it’s as good as it gets with respect to student surveys and student-centered teacher practice.”

An important subset of Habits of Success (discussed last week), agency, the capacity and propensity to take purposeful action, is key to success in life.

Through agentic action, people devise ways of adapting flexibly to remarkably diverse geographic, climatic and social environments; they figure out ways to circumvent physical and environmental constraints, redesign and construct environments to their liking… By these inventive means, people improve their odds in the fitness survival game.

The Influence of Teaching report makes 10 suggestions for teaching.

The report logic map is shown below. It suggests that teachers and family assets play a major role in support agency development. 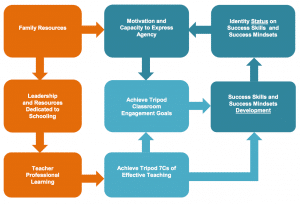 The central question explored by this report is, “How do distinct components of teaching influence the development and expression of agency-related factors in sixth to ninth grade classrooms?”

A more useful question, given advances in tools and schools in the last 15 years, would be, “How do distinct components of learner experience influence the development and expression of agency, factors related to learning models, progressions, and environments?”

A useful complement to this report is exploring how new models, like NGLC grantees, promote agency through:

The report completely misses model-based factors which are becoming at least as important as teacher factors. The difference between a Summit or EFC secondary school and a big bad high school is everything. There are certainly differences in teacher quality, but it’s one of a dozen model factors (e.g., mission, schedule, structure, advisory, technology blend, learning trajectories, and real world connections).

The report dumps a lot in teacher’s laps but most of them are stuck in an obsolete low agency model that infantilizes teenagers rather than empowering them to own their learning.

Every high agency secondary school I have visited has had some kind of an advisory structure. The sustained relationship with a caring adult that sets the cultural tone, is part of a distributed guidance system, and provides continuous feedback on success habits is every bit as important as classroom instruction in developing student agency.

Agency development isn’t just a product of quality teaching, it’s the product of a quality system–one designed as a high agency environment.