Skip to content
Blogs CompetencyWorks Blog A Paradigm is a World of Circumscribed Tools, Rules, and Problems 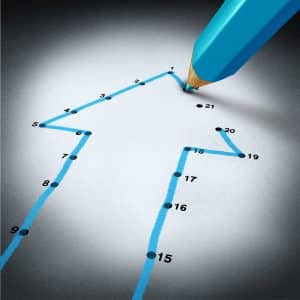 The task of this blog series, laid out in the first entry, is to analyze the struggles for educational change in a broader context of a revolutionary paradigm shift. This historic disruption of the old education paradigm is not like pulling a light switch. It is happening on many fronts in the education world. In this blog series, smaller events will be analyzed with the intention of ultimately being able to “connect the dots” of all these changes as part of the larger revolution in learning systems. In this blog, the impact of unstated and subconscious assumptions on this process is discussed.

To really understand the impact of these innovations we must identify the logical thought structures we have learned in the old paradigm that are no longer valid in the new paradigm. These deeply seated, old thought structures can cloud our ability to clearly see how the innovation will work in an era with new rules of engagement. In an iterative process, though considering new ideas in relation to old ideas we can grow to understand the actual impact of adopting new ideas.

So much of how we view education is internal and part of our belief system about how humans and the world behave. Just as the change from a geocentric to heliocentric world on the surface appeared to just be science, at its root were many more subconscious or not so subconscious beliefs as evidenced by the church initially weighing in against the new heliocentric view of the solar system. In education, there are many beliefs about how people learn and personal and emotional experiences with learning that inform people’s ideas and how they feel about the learning process. In any conversation about education, assumptions guide each person’s conversations, but the person is not aware of many of those assumptions. It might be similar to an iceberg, 10 percent of the iceberg is above water and 90 percent is below. The same may be true with education conversations. Yet, that 90% that is subconscious informs the position a person holds about education even if s/he is not aware of those beliefs.

Most often when education conversations become emotionally charged or disconnected, is when the participants believe they are talking about one thing but actually have at the core, much deeper issues driving the conversation. Because those underlying issues are not exposed, coming to an understanding or place to move forward is difficult or impossible. To move through this education revolution to a successful realignment will take hard work on all participants’ part to continually identify the hidden assumptions about education they hold that will color the solution processes in which they are engaged. Oftentimes solutions are shot down because the logic of the old system is being used to analyze the new solution.

Language to unpack this phenomenon can be found in Kuhn’s description of the metastructure of the revolutionary process. Kuhn identified that all paradigms bring with them special tools of practice and measurement. Those tools are used following a set of rules in identifying and solving problems that exist within that paradigm. Moving to a new paradigm requires using new tools and measurements using new rules to solve new problems unlike what were used in the previous paradigm. That is why when new solutions to education such as competency-based education are presented, it is important to identify when assumptions, tools, and problems used in the traditional industrial era model may cloud a clear view of how this new system will work (tools and problems) and what it will deliver (measurements).

Here is an example of how this understanding of Kuhn can be used to identify the largest change in paradigm constructs of the education revolution.

This provides a great starting point to build a compendium of examples of 20th century Tools, Rules, and Problems and their corresponding 21st Century iteration. Please send me your list to add to what I have started. This will provide the basis for further discussions about how to approach these smaller level changes that ultimately are part of the larger paradigm shift.

Craig Schieber is Director of Academic Innovation at City University of Seattle. Over the past 40 years Craig has built a reputation as an innovator and leader of change in education. His work has focused on building student agency, project-based learning, inquiry learning, and personalizing the educational experience. Current efforts focus on the development of competency-based education and the many aspects of teaching that are encompassed in this historical shift in education pedagogy. Craig has been recognized with: The White House Presidential Teacher’s Award, Who’s Who in American Schools, and The Golden Acorn Award. Contact cschiebersea (at) gmail (dot) com and @cschieber