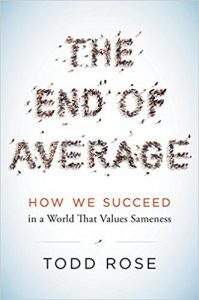 If there is one example that best exemplifies the paradigm shift from industrial to information eras, it is the example used by Todd Rose in The End of Average (Rose, 2016). In this book, he outlines the shortcomings of the concept of average. He talks about how the US Air Force had to make a major mental shift in how they thought about designing jet cockpits. Jet cockpits were initially designed to fit the average sized pilot. Sadly, through a series of events, they found that none of 4,000 pilots shared all ten physical body traits of their “average” pilot. In fact, only a small percentage had three measurements in common with their model of average. The Air Force was designing cockpits for non-existent pilots. In response, the Air Force now builds cockpits that are adjustable to varying degrees, so that you might say they are designing to the edges rather than the average. Pilots of great size variation can now fly jets.

In the case above, the Air Force found that the use of the statistical process of averaging was not effective in informing the design of jet cockpits. The same lesson is being learned in the education world in this information age. An example of this comes from the heroic efforts by teachers to meet individual student needs through differentiated instruction within the paradigmatic structure of the industrial era education system. In discussion of the example, I will highlight where Problems, Tools, and Measurements of each paradigm are being used (see earlier posts about these terms).

Carol Ann Tomlinson, a leading proponent of differentiation, defines it as, “ensuring that what a student learns, how he or she learns it, and how the student demonstrates what he or she has learned is a match for that student’s readiness level, interests, and preferred mode of learning” (Rock, Gregg, Ellis, & Gable). Teachers can differentiate through adapting curriculum, instruction, or assessment. The suggestions for adaptations all run into logical barriers when attempted in the structure of an industrial era classroom.

It would be hard to find someone who would argue that providing individualized instructional support for all students is not a virtuous goal. But the ability to achieve this goal is greatly affected by the historical era in which one lives. Historical eras have ways of impacting every aspect of our lives. As we move from one era to another, it is important to realize that the leaving of the tools and measurements used in one era is not an indictment of them, just a part of the evolutionary historical process. Industrial era schooling served its purpose of moving masses of peoples through an education system using the tools of the day. Now in the information era, we take similar journeys using new tools and measurements to reach those ends.

Craig Schieber is Director of Academic Innovation at City University of Seattle. Over the past 40 years Craig has built a reputation as an innovator and leader of change in education. His work has focused on building student agency, project-based learning, inquiry learning, and personalizing the educational experience. Current efforts focus on the development of competency-based education and the many aspects of teaching that are encompassed in this historical shift in education pedagogy. Craig has been recognized with: The White House Presidential Teacher’s Award, Who’s Who in American Schools, and The Golden Acorn Award. Contact cschiebersea (at) gmail (dot) com and @cschieber