This is the second post in a series about Four Rivers Charter Public School, an EL Education school in western Massachusetts. Links to the other posts are at the end of this article.

Four Rivers is making a deliberate shift toward distributed leadership, with teachers taking greater responsibility for leadership at the school level, not just in their own classrooms. Both teachers and administrators are enthusiastic about the initial results.

In traditional schools, authority is hierarchical. This can produce a culture of compliance that works against teachers taking initiative for school-level improvements. Distributing leadership helps to manage the complexity of competency-based schools, promotes leadership opportunities for educators, and builds structures and culture for collaboration, as explained in Moving Toward Mastery: Growing, Developing, and Sustaining Educators for Competency-Based Education. Cultivating empowering and distributed leadership is also one of the quality principles for competency-based education.

A shift toward teacher leadership at Four Rivers happened in late 2017 when Principal Peter Garbus and Assistant Principal Susan Durkee attended an EL Education leadership institute on this topic. Excited about implementing what they had learned, they recruited three teachers who had each been at Four Rivers for more than a decade to join them in forming an instructional leadership team. One teacher was from each of the school’s three grade-level tiers (7-8, 9-10, and 11-12). The team met last summer to make initial plans and then attended an EL Education leadership institute together in the winter to increase their understanding of effective strategies.

“Teachers should and need to be involved in leadership of the school, and that’s got to focus on students’ learning,” Garbus said. The teachers on the leadership team have played key roles in planning and leading the school’s professional development work, which began with creating the faculty work plan. This focused on enhancing curriculum and advancing three school-wide key learning outcomes developed collaboratively by the faculty—that students should become strong investigators, critical thinkers, and communicators; effective learners; and ethical people who contribute to a better world.­

The school’s focus this school year was to promote those key learning outcomes by enhancing the curriculum and deepening student engagement. Their first step was to collect data on curriculum and engagement through a series of classroom walkthroughs. Then they developed PD activities connected to what they learned from the observations. 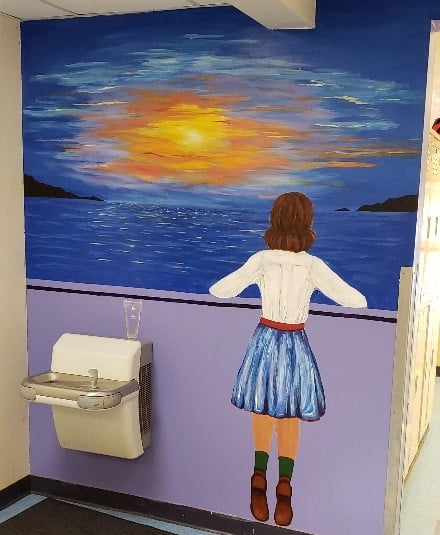 One of these activities was every teacher conducting a peer observation in another teacher’s classroom. Initially, the visiting teachers filled out a feedback sheet and gave it to the observed teacher after the class ended. Laura Stamas, a high school science teacher on the instructional leadership team, explained that one impact of having teachers on the team was changing this protocol to go beyond the written feedback sheet by adding an in-person conversation after the observation.

The school administration had felt that the time required for this extra step would be a burden on teachers, but the instructional leadership team heard from other teachers that they were disappointed not to have the opportunity to debrief verbally. The solution was that time was set aside for the debrief during a regularly scheduled professional development afternoon. The observations, feedback, and related professional development work have led many teachers to make curriculum enhancements focused on deepening student engagement.

“All of the teachers seem to think that the teacher leadership has been a positive change,” Stamas said. “Peter has great ideas about PD, but having teachers involved in the planning and execution is making it even more relevant.” She added that the school administration is sensitive to teachers’ needs, but that having teachers on the team has led to some insights that are difficult to have without actually being in the classroom.

Durkee agreed, saying “the teachers help the administrators be more responsive to the needs of teachers.” She described many benefits of the new leadership structure: “As more teachers take part in instructional leadership, the more leadership chops are spread throughout the school. When faculty are leaders, they’re feeling the agency that comes with leadership. They’re also learning what’s hard about leadership, what happens when you hit the wrong note, and how you respond when that happens.”

The instructional leadership team work is in addition to the teachers’ other responsibilities, and they are paid a stipend for this work. The school would like as many teachers as possible to be on the team over time, so they are considering having two-year terms, scheduled so that only part of the team turns over each year. This would enable more teachers to develop leadership skills, offer input from diverse perspectives, and reap the benefit of this opportunity for their professional pathways.

The school’s PD work is supported by a scheduling innovation that has been in place for 15 years—every Wednesday students are dismissed 90 minutes early, and teachers stay up to two hours later than other days. That leaves up to three hours weekly for PD, although some of it is used for teacher planning time. The school day is lengthened by about 15 minutes on the other days of the week to meet state requirements for annual hours.

The EL Education leadership institute that the instructional leadership team completed, which is similar to a more extensive course called “Unleash the Potential of Shared Leadership Through Accountable Teams,” is described in EL’s Professional Development Catalog. There are also many other ways to share leadership in a school, as described in Moving Toward Mastery: “School leaders can distribute leadership by delegating responsibility and decision-making related to implementation and continuous improvement efforts, recognizing and supporting good ideas, providing leadership development capacity-building, and offering multiple opportunities for advancement. School leaders can create multiple opportunities for educators to lead, including leadership teams focused on instruction and culture, educator-led communities of practice, and participatory governance teams that include learner, educator and community representation.” Four Rivers uses some of these other approaches too, and their instructional leadership team is off to a very successful start.

I’ve had the chance to thank Peter Garbus and Susan Durkee in the previous post about Four Rivers. I also want to thank Laura Stamas and Mandy Locke (both members of the instructional leadership team, along with Jessica Roll), who were great resources not only during my site visit, but also as two of my can-do, always-upbeat mentor teachers during my three years teaching at Four Rivers.