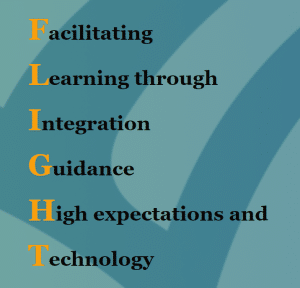 This is the second post in a series on my visit to Wisconsin. Start with this look at what’s happening state-wide.

The School District of Waukesha in Wisconsin sits about twenty-five miles west of Milwaukee. The district has created innovation space for schools to move toward personalized, proficiency-based learning. A district administrator explained this spirit of innovation as, “If you can say yes, then say yes.” The result is that there are at least three schools that are transforming themselves: Waukesha STEM Academy was the first to make the transition; then a school-within-a-school programmatic approach called Flight Academy at Horning Middle School took the plunge; and now Blair Elementary School has started the process.

Waukesha has not created a system-wide transition strategy, and it’s unlikely they will do so in the near future. They share a belief that the transition has to come from educators in the school. However, there are elements of their policies and operations that support personalized, proficiency-based education. For example, Gallup’s Hope survey is used to get a read on engagement and school climate. They are also working with the Institute for Personalized Learning (director Ryan Krohn was an assistant superintendent before he went to IPL) on developing a better understanding of agency, empathy, and perseverance. What do they look like? How do they develop? And what can schools do to support their development?

FLIGHT is actually an acronym: facilitating learning through integration, guidance, high expectations, and technology. They’ve made a video (found on this page) to explain the vision.

Developed by two teachers, Krista Krauter (a teacher at Horning for eighteen years) and Jeffrey Taege, FLIGHT is a program within Horning Middle School designed as a multi-age, personalized learning pathway that focuses on collaboration, technology integration, and 21st century skills. A student’s core classes (science, math, and humanities) take place within the academy as interdisciplinary seminars. All elective classes (music, art, technology education, business, foreign language, REAL, and phy.ed.) take place in the general Horning classes, with students in their age-based grade. Krauter explained, “When I had my own kids, I realized that we had to do something very different in schools. I didn’t want my kids sitting through school day after day just listening to a teacher. There had to be a better way of designing learning.”

FLIGHT Academy is now in its fifth year, with seven teachers and 160 learners. This is a similar student to teacher ratio as the rest of Horning. Below is a high level description of their program.

The FLIGHT academy team designed the space around personalization. There are multiple options for seating in one large community room with smaller rooms for studios, Socratic seminars, and conferences. There is also a lounge that is a designated quiet space.

Given that it is operating in a traditional school building with a 55-minute, seven classes per day schedule complete with bells, the FLIGHT program has to function within the constraints of their middle school schedule. This year, learners have a 4-hour block of time where they are all in FLIGHT learning together in their chosen seminars. Each teacher holds an advisory period each day with a set of twenty-five to thirty learners who they are assigned to for their three years in FLIGHT. During advisory time, students are working on their own individual learning goals, and each advisor spends time conferring with students weekly about their progress toward their goals. Learners utilize a portfolio where students link artifacts that show their proficiency toward the standards within each subject area.

As much as possible, Flight uses relationships with local employers to create real-world projects like creating an iPad app to help seniors at Waukesha Bank. I spoke with Alex, who focused on GMOs. He explained, “At first it is really hard to do it on your own. I had to figure out all the questions I wanted to ask and then the order of my research.” Another student said that the projects are very helpful, “Teachers talk to us about the main things we should know. We can then take that and dig deeper to learn.”

When teachers aren’t leading seminars, they are able to have conferences with students. The expectation is that teachers meet with students once per week to check in (more for sixth graders as they become familiar with how FLIGHT works), address misconceptions, set new goals, and provide coaching in the foundational skills that are needed to become more independent learners. Parents are often involved in conferencing through videoconferencing or written feedback. After a student conference, notes are sent home to parents. Thus far, feedback from parents has been that dinner conversations about “what did you learn in school today” have become much richer.

Multi-age advisories are held every day. They are designed to invest in building strong relationships between teachers and students; to introduce and provide coaching on how to build a growth mindset, character building, and goal setting; and to check in with students. The advisory portion of FLIGHT was so successful, it’s now spread across the entire school. (Interestingly enough, advisory was also the first practice to spread system-wide at Springdale.)

At the beginning of school, new students are likely to be working grade level bands as they begin to learn about how the program is designed, get ready to build “self-directed learning skills” (such as creating their own schedules), and become familiar with the different ways of learning, including the adaptive software. After about three weeks, students begin to work in groups more organized around their readiness levels and in multi-age groups in seminars and projects.

Krauter raved about the value of the multi-age band with, “Magic happens when you can put the kids together.”

FLIGHT is organized around a learning continuum that stretches performance levels 5-9 in order to address students entering school with gaps or advancement in skills. The instructional strategies focus on what students know and where they should be working (as in zone of proximal development) as well as identifying misconceptions they have in concept or process that may impact them later on. Teachers are creating modules to help student focus in on gaps so they become fully proficient rather than always relying on scaffolding to access curriculum.

Math teacher Will Taege emphasized, “The transparency of the learning expectations and the learning process is what makes the proficiency-based system so powerful. Without transparency, the program would continue to be educator-driven and students wouldn’t have the opportunity to learn the skills to be an independent learner.” Teachers also pointed out that having the continuum available means that learning doesn’t have to be linear. Sometimes it makes sense, especially in math when a more advanced skill may be fully dependent on an earlier one. But in science and the humanities, there are many ways to organize the learning.

As students move through the learning continuum, “leveling up” to the next performance level, many are learning at high school level. FLIGHT had to find teachers able to teach both middle and high school math and science to ensure they were prepared to fully support students.

FLIGHT Academy is using Google Docs to share information about students, with teachers and advisors able to enter information. Krauter explained that in terms of formal reporting, they are required to use Infinite Campus, which only allows standards-referenced grading by grade level. They hope to do more portfolio-based and continuum based grading. Dave Riley, the newly hired humanities teacher, expressed frustration, “There is so much more about students than what can be recorded in Infinite Campus. We need information management systems that allow us to monitor student progress in much richer ways.” The team at FLIGHT is beginning to develop cross-cutting competencies and also checking out other options that might be able to help them track student progress in academics and the social-emotional skills.

Next in the series, we’ll visit Blair Elementary.