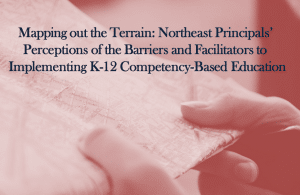 One of the greatest inventions of the last twenty years has to be mapping services like Mapquest or Google Maps. Not only can a mapping service help you navigate to any location, it can also use real-time traffic and road conditions to help you avoid long delays during transit. Our research on K-12 principals’ perceptions of the facilitators and barriers to competency-based education implementation is intended to act like a Mapquest or Google Maps of sort. Let me explain.

Many states, districts, and/or schools around the United States are transitioning to a competency-based approach to education. This means that state policymakers as well as school and district leaders find themselves searching for the most efficient roadmap to help their communities and other stakeholders move from a traditional system of education to a competency-based system. Many advocates have written about quality design principles and other characteristics of competency-based systems, which can serve as a basic roadmap for policymakers and practitioners as they start along this journey. What is less known, however, are the traffic and road conditions that can occur along the way to either speed along or hinder the journey, depending on the context and real-time adjustments.

The purpose of our qualitative study of approximately 200 principals in the seven Northeast states during the summer of 2017 was to identify the perceived restraining and facilitating forces related to implementing K-12 competency-based education. In other words, what do principals say impedes or facilitates their quest to move to a full competency-based system and what is the relative frequency with which they rank these barriers or supports?

In our full research study, which you can access here, we find that the most frequently cited barrier to implementing K-12 CBE according to the principals surveyed in this study was securing buy-in/acceptance from community members, parents, and/or faculty/staff. Buy-in/acceptance refers to the support and belief in the reform to meet its intended aims. Almost 40% of (or 4 out of every 10) principal responses noted that resistance or lack of buy-in/acceptance from key stakeholders was a significant barrier to implementation. This resistance was sometimes described as relating to shifting mindsets, adjusting belief structures, or just resistance to change more generally. For example, one principal said “parent understanding of the idea” was a barrier to implementation and another principal described this as requiring a “complete mindshift of parents and staff.” Interestingly, buy-in/acceptance was not a highly reported facilitator to implementation (<8% responses). We make sense of this finding by surmising that once key stakeholders have accepted a school’s movement towards a competency-based model of education, the roadblock has ostensibly been removed and that factor fades from view.

Garnering buy-in/acceptance differs from two of the other most frequently reported barriers to implementation— training/professional development and school structures/policies—as those seem to exist as both key barriers and facilitators. The combined percentage of responses to each of these two themes (adding barrier and facilitator responses) is around 56%, which means almost 6 out of every 10 principals identified school structures/policies and training/professional development as important to implementing CBE. That finding alone suggest that these two factors are critical to plan for and address.

In terms of what principals noted with regards to training and professional development, it was interesting that specific types of training or professional development were not given in responses to either question. Instead, principals tended to write simply “training” or “professional development.” With regards to school structures and/or policies, principals most often noted barriers as the need to update school schedules and figure out the logistics of allowing students to move on when ready. For example, principals noted “seat time,” “length of day,” “traditional structure of school schedule,” and “grade levels” as barriers to implementation. These barriers to implementation were discussed a little differently when principals responded to the question about facilitators. Instead of noting scheduling issues, principals mentioned why changes to the schedule were needed. Scheduling changes were needed to support teacher common planning time and also to provide remediation/enrichment blocks to students in order to support flexible pacing. The barrier became a facilitator. Figuring out how to provide a specific intervention program such as an RTI block or structure within the school day was mentioned frequently in these responses.

Time was also mentioned as a significant barrier to implementation. Most often time was referred to generally; however, there were specific uses of time that were also listed. These included providing time for teachers to participate in professional development and collaborate with colleagues. In comparison to how time was discussed in relation to its function as a barrier to K-12 CBE implementation, when time was referenced as a facilitator to implementation there was often a specific use for which that time was needed. In almost all cases, principals said that teachers needed time to collaborate with colleagues for the purposes of “common planning and curriculum work,” “look at student work,” “discuss evidence of student learning,” “create rubrics,” and “calibrate their understanding of [student] proficiency.”

Another barrier to implementation that was noted by school principals in about 14% of responses was shifting grading and reporting to competency-based grading and reporting practices. When discussing this issue as a barrier, principals referenced “traditional attitudes towards bell-curves and numerical/letter grades” among teachers, but especially among parents. Many principals said that parents had concerns about competency-based grading because they are not accustomed to that type of grading or reporting system. Principals noted that parents have specific concerns about the removal of an A-F letter grading system because they are unsure how colleges or universities will make sense of their student’s transcript, how the high school will decide on class valedictorian, and/or how changes to grading practices will affect their student’s ability to get college scholarships.

In terms of competency-based grading as a facilitator to K-12 CBE implementation, principals noted that aligning grading and reporting practices to competency-based learning and instructional practices was a key lever in institutionalizing change within their school. For example, one principal said that discussing the relevance of homework in a student’s final grade helped to clarify to parents and teachers why the move to competency-based education made sense. According to one principal, “just because a child shows up every day to class and turns in their homework doesn’t mean that they understand the material.” Including participation and homework in final grades confuses the interpretation of student achievement—what a student actually knows and can do—and therefore changes to grading and reporting practices can facilitate CBE implementation.

It is important to note that funding was not noted as a significant barrier to implementation in the survey responses. Instead, approximately 4% of principal responses noted funding as a barrier and about 3% noted funding as a facilitator. When funding was noted as a barrier or facilitator it was often in reference to funding for “training staff” and “professional development” or “curriculum money to pay people over the summer.” In other words, it didn’t appear that funding was needed to purchase programs or other resources, but was instead needed to support the on-going need to provide professional development and training to teachers in how to implement competency-based education at the classroom level.

In sum, our analysis suggests that there are four high-leverage barriers and four high-leverage facilitators that if specifically addressed in pre-planning stages may help schools and districts navigate the terrain when implementing K-12 CBE.

The four high-leverage barriers include:

It is noteworthy that almost four in ten respondents identify the upfront work of accepting the change to CBE as the largest barrier. This underscores the importance of establishing the relevance of the change for the individuals implementing the change. Similar to buy-in, both time and training are aimed at supporting the individual educator. While changing school structures and policies do impact the teacher, the locus of the action is focused on the school’s response. The primacy of the individual is apparent in these findings on the barriers to K-12 CBE implementation as three out of the four factors just discussed center around individual supports and resources offered to teachers.

Interestingly, three out of the four high-leverage facilitators overlap with the aforementioned high-leverage barriers: school structures/policies, time, and training/professional development. This highlights the fact that the themes discussed in this research report are not necessarily dichotomous—only acting as a barrier or only acting as a facilitator. This should make it easier for districts and schools to focus their energy and resources on a few different elements rather than try to do too much and not do anything well.

More details on the study and findings are in the full research study, but we hope this broad overview provides some important information that policymakers and practitioners can use to anticipate potential traffic jams and prioritize their efforts during the early stages of K-12 competency-based implementation.

Carla M. Evans, Ph.D. is a Postdoctoral Fellow at the National Center for the Improvement of Educational Assessment (Center for Assessment). Her research focuses on the impacts and implementation of assessment and accountability policies on teaching and learning. She is interested in policy research related to innovative assessment and accountability systems,
competency-based education, performance-based assessments, and teacher/teacher preparation program effectiveness initiatives.

Todd A. DeMitchell is the John and H. Irene Peters Professor of Education and professor in the Justice Studies Program at the University of New Hampshire, Durham. His research interests include law and labor impacts on schools and colleges.