Originally posted May 16, 2014 at gettingsmart.com.  For more on Danville’s overall approach see District Transformation in Danville. 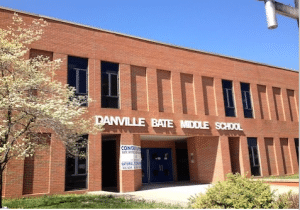 Close your eyes and imagine an innovative school, a next-generation school that excels at preparing students to thrive in college and career. Picture a school that engages students in rigorous and authentic project-based learning opportunities, a school that has developed ways to get technology into the hands of students in a way that connects to its goals around next-gen teaching and learning. You’re probably imagining a flashy high-tech building situated in well-resourced district with dollars to spare. You’re probably thinking “Sounds good, but my district can’t do this because of [insert your reason here].”

I recently had the pleasure to spend a day at Bate to witness the future recipients of “Danville Diploma” in action. Invited to participate as a judge in one round of Bate’s Performance-Based Assessments (PBATs), I had an up-close and personal look inside the well-oiled Danville machine. My day at Bate revealed some important lessons about what it means to bring the Next Generation Learning Challenge (NGLC) principles to life and what it looks like to check your excuses at the door and get down to the important work of reorienting a school district around students.

In Danville School District, a recipient of an NGLC launch grant, Bate Middle is tasked with prioritizing the seven design principles and they’re pretty much knocking them out of the park with the Danville Innovation Plan.

Although it’s obvious after a day at Bate that Danville is thinking about all seven of these principles, the PBATs best embody the connected concepts of student-ownership, high expectations and mastery-based credit in a student-centered learning environment.

I was very fortunate to act as an evaluator on a panel for the 8th student social students and ELA defenses where each of the 8th graders was given the following prompt:

Eminent domain is the idea that the government can seize private property in order to better the majority. On one side, a community can advance and will become financially and physically stronger; on the other side, it’s someone’s private property that is being used to help someone else. Is it fair? Explore situations of eminent domain in America’s history. These can include historical situations (such as the Indian Removal Act) or events in our community (the farms bought to make the new bypass in Danville). Narrow down an example of eminent domain and choose a stance: was eminent domain a good idea, or was that land the rightful property of the citizen? You will write an argumentative essay to support your stance, along with a speech persuading your audience to your argument. Driving question- Is it ever ok to take someone’s property? Is it ok to take someone’s property if it betters, or helps the country?

Each student defense took approximately 25 minutes–10-minute presentation, 5 minutes of discussion, 5 minutes of content questions and 5 minutes of evaluation. Students were evaluated using a rubric developed to measure the outcomes defined by CCSS by a panel of judges. The rubric allowed each judge to assess the written essay, presentation and overall performance. Judges on our panel included me, Danville Superintendent Carmen Coleman and University of Kentucky College of Education Dean Mary John O’Hair. In addition to the evaluations from the official judges, students also evaluated each other using the same rubric (and were often harder on their peers than the adult judges).

In addition to presenting their paper and delivering their speech, each 8th grader (8th grader!) then chose two “grab bag” questions–one social studies and one ELA–to read and answer in front of the judges. Sample questions included “Review this chart of population data from the thirteen original colonies. Describe the population trend from 1700-1770 and give one possible explanation for the trend during this time.” ELA questions asked students to identify grammatical errors and improve short essays.

I was FLOORED by the quality of the papers, presentations and conversation with these young students. I joked with them, but was totally serious, that there were masters-level papers I graded as an adjunct professor that weren’t as well organized and well presented as theirs. Even given a thorny and provocative topic like eminent domain, each student carefully laid out the issues then offered cogent arguments that support their case. Even when pushed by the judges, the students in our group remained poised and professional—a tribute to their preparation by what has to be the most passionate group of teachers I’ve come across in the dozen or so years I’ve been working in education. Dr. Coleman ended each student’s evaluation with a question asking how the PBATs prepared them for college and career. With confidence, each student connected to key ideas from the Danville Diploma and identified the habits of mind they were fine-tuning. The kids were eager to offer their opinions about how much more meaningful the performance-based assessments were than traditional exams, even without being asked. They expressed appreciation for being challenged and acknowledged preparation for their transition to high school. And yes, they expressed relief that the PBATs were over while we expressed how impressed we were with what we just witnessed.

Principal Dr. Amy Swann explains, “PBATs push innovation by mandating that students learn to work as team members, to transfer content and apply it with 21st century skills, to give and receive feedback, as well as keeping every student on the hook. PBATs also allow for scaffolding according to student needs so that your special education students as well as your most advanced students can show you what they can actually do beyond your standard expectations with pride vs only showing you what they don’t know on a standard assessment.  Additionally, the implementation of PBATs have pushed our students beyond where they have ever reached before and the high school better be ready for a whole new level of 21st century achievers coming to them next year!”

In fact, perhaps even more impressive than the PBATs is the overall culture and climate in Danville. Before the evaluations began after school, I spent the day with teacher-turned-blended-learning leader J.D. Smith.  During our tour, I observed busy classrooms, chatted with students and talked through the victories and challenges associated with shifting to a blended, competency-based learning environment. Everyone–from the students, to the teachers, to the building-level and district-level leadership–just seems to “get it.” They are taking risks, celebrating successes and constantly reiterating to improve. It’s a “fail fast and move forward” district. It’s leadership that has figured out that empowering teachers ultimately empowers students. It’s a special place with a leaky roof that looks outdated on the surface but doesn’t make any excuses. In short, it’s proof that it doesn’t take a shiny new teched-out building to innovate. All it takes is a solid plan built around a strong student-centered foundation and the support to make it happen.

Carri Schneider holds diverse experience across K-12, higher education and education policy. Since leaving her second grade classroom, Carri has been actively involved in supporting education policy efforts to advance innovations in teaching and learning. She served as an online educator from 2005-2013 in a fully online Master’s program in Educational Leadership and taught graduate-level courses in School Law and Curriculum. She has authored several pieces on the future of education. Carri manages Getting Smart’s publication portfolio and co-authors dozens of pieces with writing partner Tom Vander Ark. Carri has also presented at national conferences including SxSWedu, iNACOL’s Blended Learning Symposium and AERA. She holds a M.Ed. in Educational Administration and an Ed.D. in Urban Educational Leadership with emphasis on education policy and social justice.