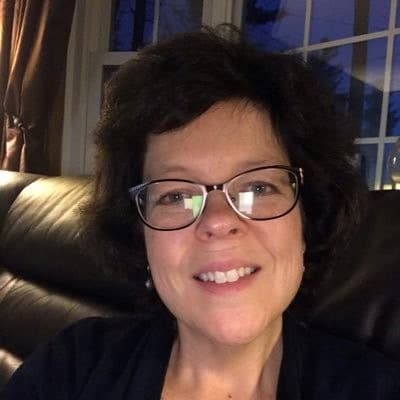 The four WSPs are collaboration, communication, creativity, and self-direction. Bolduc has developed strategies for promoting and assessing the WSPs in two New Hampshire elementary schools in the Sanborn and Timberlane regional school districts. She and other staff from Sanborn shared their WSP strategies in a series of CompetencyWorks posts in 2015. One insight was that students needed more help understanding what the WSPs looked like in practice. The 2015 posts describe a series of strategies to accomplish this, such as relating the WSPs to characters in books they were reading.

Bolduc uses graphic organizers that allow students to set goals for each WSP and then reflect on their progress at the end of each week. Over time, with input from her students, she has elaborated these organizers to include separate reflections for each academic subject, as shown in the figure below. In addition to academic subjects, she has used a similar organizer that includes recess, cafeteria, bus, classroom, and specials. 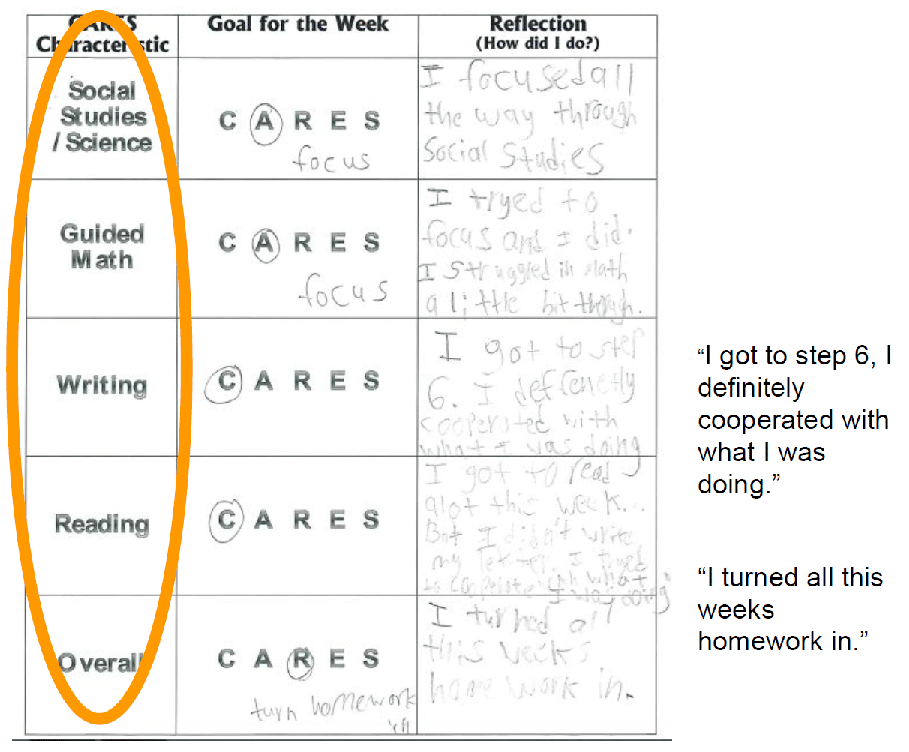 The acronym “CARES” in the figure stands for Cooperation, Assertion, Responsibility, Empathy, and Self-Regulation/Control. Sanborn was already using the CARES framework from the Responsive Classroom when the New Hampshire WSPs were rolled out, so they created a crosswalk between the two frameworks and kept using CARES. For each academic subject, students select one of the five elements of CARES and use it as their goal for that academic subject for the week. During morning meetings, students tell each other their goal, and at the end of the week they reflect on their progress out loud and written on the graphic organizers. 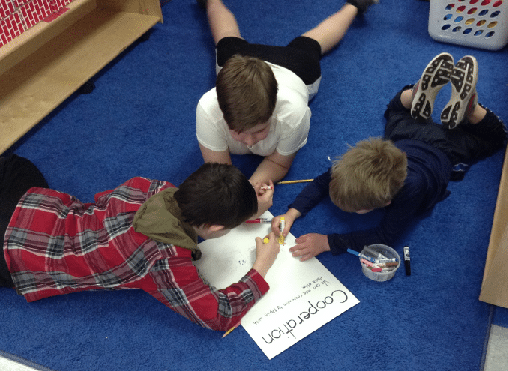 Bolduc’s students also served as CARES coaches for each other. This solidified their understanding of the skills and dispositions. It also promoted student leadership, so the teaching wasn’t all coming from the teacher. Coaches asked their partner questions such as “Are you being self-directed right now?” Partners would also discuss the end-of-week reflections and record them on another simple sheet that had space for the student’s goal, comments from the coach, and a reflection from the student. Over time, coaches’ feedback became more nuanced, as a result of practice and class discussions about how to give good feedback. Students choose whether to keep their goal-setting and reflection sheets on paper or Google Drive.

When Bolduc moved to the Timberlane Regional School District in 2017, she adapted to yet another acronym, but used similar strategies. She said that focusing on the Work Study Practices improved classroom dynamics and her students’ behaviors in other settings in the school. Other teachers noticed and became interested in developing the WSPs with their own students.

In her presentation, Bolduc addressed the important concern that WSPs are just one more responsibility for already overloaded teachers. She believes that the time teachers invest in WSPs early in the school year pays off throughout the year in terms of greater classroom productivity and student learning. This makes the teacher more efficient and effective, which offsets the original time spent. After students understand the WSPs, they can be streamlined into daily classroom discussions rather than being a large additional demand on time. She said, “It’s quick. It’s in the moment. It’s when you notice. We didn’t spend all of our time talking about WSPs! And you start hearing kids talking about it with each other, so they start doing the work for you: ‘You’re not being very respectful right now!’”

Districts that use competency-based grading and require formal assessments on the WSPs often use a one-to-four scale, tied to categories such as Beginner, Advanced Beginner, Strategic Learner, and Emerging Expert. An outstanding publication from the Center for Innovation in Education provides developmental frameworks for each of the four WSPs. These frameworks analyze each of the WSPs into their essential parts, such as Collaboration consisting of self-awareness, communicating, negotiating & decision-making, contributing & supporting, and monitoring & adapting.

Bolduc’s takeaways included fostering student agency and metacognition by listening to student feedback, trying out their ideas, and being willing to change anything that’s not working. Her suggestions for getting started were: (1) Set a reasonable goal. Think about how you can incorporate this work into what you’re already doing. (2) Select language that is student- and rubric-friendly. It’s more about growth than a grade. (3) Be flexible and forgiving.

Bolduc’s work is a terrific example of the persistence, flexibility, and openness to student input and leadership of so many innovators in competency-based education. She also demonstrates that strategies to promote essential skills and dispositions do not rely on a particular set of terms or definitions—a good thing, since the field currently has so many different versions. While she primarily spoke about elementary school, similar work could be done school-wide at the middle and high school levels, such as being introduced during advisory periods and then utilized by teachers across academic disciplines.