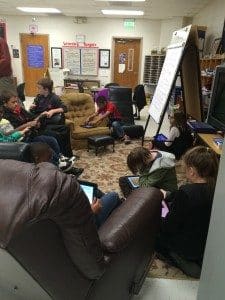 This post is part of the series Competency Education Takes Root in South Carolina. This is the fifth in the series on Red Bank Elementary in Lexington School District. Begin with the first on five big takeaways and follow along with: #2 teaching students instead of standards, #3 teacher perspectives, #4 student perspectives, and #5 parent perspectives.

The employees at Red Bank Elementary outside of Columbia, South Carolina have a choice about where to send their children to school. I had the chance to meet with five employees with seven children – all of whom were at Red Bank or had been until they had to move on to middle school. Here are their insights about personalized, competency-based schools.

What has been the impact of having your child in a school that is personalized and competency-based?

“My fifth grader was visiting the principal’s office once a week in the previous school. He hasn’t received even one referral since we enrolled him at Red Bank. He’s a typical “ADHD” boy who only sees his way and can only sit down for five minutes at a time. Here, he gets to feel in control by being able to make choices.”

“My daughter is above average in reading and struggles in math. But she has never been low enough in math to get an official intervention. She gets frustrated easily in math and needs a lot of support. Her teachers here know she can shut down – they see the shutters coming down. They meet her where she is at and have her work on other things if she has turned off. They also create repeated opportunities for her to keep working on math, giving her more time. Her pace is different than the teacher’s and she knows that she will have enough time to learn. The pressure is off and she is building her self-confidence. I worry about next year – when she finds out she only has one shot at it, she is going to probably start shutting down again.”

“My daughter struggled with reading before she got here. It was a big problem. Here the teachers work with her and she isn’t having problems anymore.”

“My son is an active learner. If he is interested in something, he goes and looks it up. He struggles if he is expected to sit and get it. He struggles if there is homework assigned that isn’t engaging him. In his class, he has a choice about how he learns things so he can choose the ways that are the most engaging to him.”

“My second grader is very serious about her education. She thinks about what she is learning. She was telling me about symbiotic relationships the other day.”

“There are many leadership roles for students at Red Bank. My fifth grader is painfully shy. One of the opportunities they have is to run the morning announcements. She gave it a try, and now she is the ringleader in making sure everyone else is doing their part. Red Bank helped to push her out of her comfort zone and has been remarkable for building her self-confidence.”

“At Red Bank, kids are getting opportunities to shine.”

“My kids use the language of the school at home. Once when I heard them fighting, the youngest said, ‘You are not thinking win-win.’ She told me she was being proactive in ‘putting my outfit out the night before.’ She will set goals at home and measure her accomplishments.”

“We have standard operating procedures for homework and what to do after school.”

“My daughter is now in middle school. She knows that a C isn’t the same as proficient – it’s a pass. She knows the expectations are lower.”

“The reports cards have been confusing. I need to know how my kids are doing really easily and if they are behind pace. It’s great to have teacher comments, but I need to know exactly where they are. When my kids got an A I knew they were okay. There is definitely an improvement in the report cards – it was a problem when they used only colors because I thought red indicated bad. It’s getting better now.”

“We need to be able to access the progress reports on our own, not wait for the report cards.”

[Note – Red Bank doesn’t have parent sign on into Jump Rope…yet. It is also difficult for the employees to email outside of the district with their district emails.]