Skip to content
Blogs CompetencyWorks Blog Reflecting on The Field of Competency Education: Where We Started and Where We Are Now 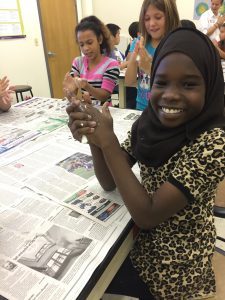 Every summer, the CompetencyWorks team and our advisors reflect on the progress that is being made and the emerging issues that we see developing. This helps us know where to focus our attention in our daily work, and it is a leadership opportunity for all of us to hear from others from around the country and different perspectives about how competency education is advancing.

This article highlights some of the areas of our reflection and will accompany today’s webinar Competency Education: A Reflection on the Field and Future Directions. For those of you completely new to competency education, you might want to glance at What is Competency Education? as a starting point.

Where We Started and Where We Are Now

There are different starting points for how we tell the story of where we started. Several valuable reports provide slightly different starting points and critical stepping stones, although almost everyone will recognize Benjamin Bloom’s contribution. It would actually be an interesting project to talk to leading innovators and find out the key advances in education they are building upon. For those of you interested, I suggest the following reports to learn more about the foundation for competency-based education:

At CompetencyWorks, our understanding of competency education is that it is a transformation of culture and structure. It is best approached as a district reform to enable students to have the fullest support no matter where they are on the learning continuum, from kindergarten on up to college level. The commitment to all students successfully learning the skills they will need for college, career, and life also requires a strong commitment from leadership – both school board and district level. However, there are many examples of schools within traditional districts being able to implement in a way that is highly meaningful even though there may be some limitations and work-arounds.

Thus, our starting point of competency education often begins in the mid-1990s, where, on one coast, innovators in Chugach School District were transforming their schools in response to Native Alaskan communities demanding that their children be educated. On the other side of the country, innovators were developing Diploma Plus and Boston Day and Evening Academy to re-engage students by focusing on learning and skill-building, not simply accruing credits.

Since then, there have been stages of development – of practice and of policy. The most important thing to remember is that, as a movement, competency education has been educator-developed and educator-driven. For example, the Maine Cohort for Customized Learning, a collaboration of districts, helped to catalyze change in Maine. Lindsay Unified, one of our lighthouse districts that continues to develop and refine their model, launched their transformation in a state that has made no effort to create innovation space. In the past five years, investments have often been directed toward creating new models, including Next Generation Learning Challenges, Opportunity by Design, and XQ schools. Some of the grantees have been intentionally competency-based, while we are seeing some schools inch their way in that direction. 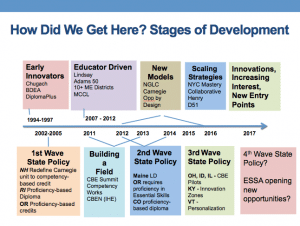 One of the important stages has been when mid- and large-sized districts began to contemplate the move to competency education. Previously, the trend had been for districts in more rural or inner ring suburbs to be the primary innovators, partially because the number of schools and educators allowed people to gather to talk with each other. Essentially, an implementation plan was needed but not one that required scaling.

Kettle-Moraine, Henry County, Lake County, Charleston, and District 51 have all been leading mid-sized districts to initiate strategies that introduced personalized, competency-based schools with a scaling strategy. Each has used different strategies, reached different stages in implementation, and encountered different challenges – and each can help us to learn how a mid-size district can transform all their schools. These will be an important avenue for our learning over the coming years. New York City Department of Education’s Mastery Collaborative, with their voluntary network of 40+ schools, is the best example we have for how large districts might begin to introduce and build capacity about competency education.

There are a number of districts and schools that are pushing out the idea of what competency-based schools might be if they were able to shake off many of the rituals and routines of the traditional school. Kettle-Moraine, EPIC North, the Young Women’s Leadership School – Astoria, Waukesha’s STEM Academy, Making Connection Charter School, and Building 21 help us to think about how powerful a common and calibrated learning continuum can be when it focuses on academic skills.

We are now beginning to understand that we are seeing districts and schools use a common set of design principles with variations in how they are implemented. Variations include the set of skills schools focus upon, with some focused on higher order skills, some using the state standards, and some focusing on different sets of lifelong learning skills. Another variation is how schools create communities of learners – some continue to use grade levels as an organizing structure, some are turning to multi-age bands, while some are highly individualized. One of the areas we think is very important is to pay attention to how schools think about meeting students where they are: academically, developmentally, and in terms of all the lifelong learning skills.

Policy has been advancing simultaneously to practice. It’s very important that we never let policy get too far ahead, as we want to make sure that policy is informed by the experience of innovative educators and does not lead to technical changes without the opportunity to make the cultural shift that must go hand-in-hand. The first wave of policy changes was in the early 2000s, with New Hampshire, Oregon, and Rhode Island leading the way in introducing competency-based credits and a proficiency-based diploma. A second wave around 2012-2014 included Maine and Colorado in introducing proficiency-based diplomas. The third wave of state policy has focused more on state-initiated pilots and creating innovative space. Finally, we have just entered a new stage with the opportunities introduced by ESSA.

In the next post, the focus will be on the strength of the field organizations.

Part 1 – Reflecting on The Field of Competency Education: Where We Started and Where We Are Now

Part 2 – Reflecting on The Field of Competency Education: Organizations and Literature