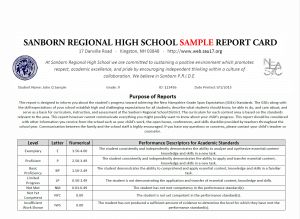 Districts are creating a variety of grading practices and transcripts that are being described as standards-based and competency-based grading practices. Some are hybrids retaining elements of traditional grading. Many convert to traditional points in order to produce a GPA and rank students. Most importantly, some districts attempt to create new grading practices without putting adequate supports and policies to personalize education into place. At CompetencyWorks, when we think about grading, we think about the question, “How will you ensure that students are progressing?” Grading is one of the practices that is needed, in addition to many others. (See Progress and Proficiency: Redesigning Grading for Competency Education.) Increasingly, colleges and universities are supporting proficiency-based transcripts. (See information on the Collegiate Endorsement of Proficiency-Based Transcripts.) In the following article, Brian Stack, principal at Sanborn Regional High School, addresses misconceptions based on their experience with redesigning grading.

After many years of experience as a high school principal in a competency-based high school, it is the transcript that generates the highest degree of inquiry from outsiders seeking to understand our system, and for good reason. In both traditional and competency-based models, the high school transcript represents a student’s ultimate cumulative record of learning, a record that must be communicated in a clear and concise manner to both admissions officers at post-secondary institutions as well as potential employers. Over the years I have encountered several misconceptions and myths about what a transcript for a competency-based program should look like. It’s time to dispel these myths and set the record straight.

Myth: Reporting measures such as grade point average (GPA) and class rank cannot be computed in a competency-based school.

False! These two measures can be included on a competency-based transcript. There is often a fear from outsiders and newcomers that because most competency-based schools report assignment grades using a four or five point letter rubric scale, there isn’t an opportunity to compute a GPA. This is simply not true. In my school, a student can only earn one of five letter grades on individual assignments based on their performance level as indicated on a rubric, but in the background, those letters correlate to the numerical values of 0, 1, 2, 3, or 4. As the student completes multiple assignments, we are able to compute an overall course grade and thus a GPA that is a numerical value between 0 and 4. From the GPA, it is then easy to compute a class rank statistic. This, however, leads to another popular myth.

Myth: Competency-based schools do not want to report class rank because it doesn’t fit with their philosophy.

This statement is actually true, but most competency-based high schools continue to report class rank because it is a statistic that many admissions offices still seek from applicants. Philosophically, class rank doesn’t fit with the competency education model because it is computed by comparing an individual’s performance against the performance of their peers. Class rank gives no indication of the level or degree of learning that has taken place. In competency-based systems, student learning is measured against a standard of performance set forth in a well-defined rubric. Although the tide is starting to turn, this philosophy is not yet widespread in higher education, and as a result, class rank is still a standard reporting measure that competency-based high schools calculate and report.

Myth: In a competency-based school, the transcript is too long and thus too confusing for college admissions offers and potential employers to follow because it contains a much higher degree of detail than one from a traditional school.

False! Most competency-based high school transcripts still contain the same base reporting measures, which include course names, final course grades, credit earned, grade point average, and class rank. Over the years, I have shared our transcript with hundreds of admissions officers representing post-secondary institutions from coast to coast. I have yet to encounter one who was confused by our transcript or our competency-based reporting model. For many outsiders new to the competency education approach, this knowledge brings about a welcome sigh of relief. There is always a fear among parents and students that if their high school were to move to such a model that the transcript would change so drastically that it would be difficult to interpret and as a result hurt a student’s chances of being accepted to a post-secondary institution or offered a job. I have not seen this at all. In my school, for the ten years prior to the implementation of competency education, an average of 72 percent of our graduates attended two or four year colleges after high school. In the six years since that implementation, that statistic has risen to nearly 78 percent. The implementation hasn’t hurt their chances of staying in college either. Since we started collecting data on our graduates in 2013, we know that on average, 87 percent of them return for a second year of college, a statistic that is far above the national average.

In my experience, I have come to understand that reporting out on student learning in a competency-based model has several layers. At the assignment level, rubrics help students understand how their learning meets or exceeds the performance criteria set for the competency or skill(s) being assessed. At the course level, a report card communicates to students their performance on each of the competencies associated with the course of study. The transcript simply gives a high-level overview of performance in each course of study over a student’s entire high school career. The role of the transcript has not changed, and its format doesn’t have to either.