This is the third post in a series about the Farmington Area Public Schools in Minnesota. Links to the other posts are provided at the end of this article. 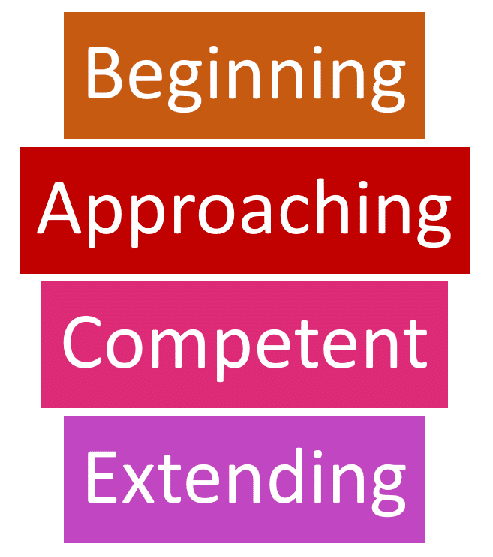 The English department at Farmington High School has made major shifts toward competency-based curriculum and instruction, as described in the previous post. This has required parallel shifts in assessment, with greater use of formative assessment and competency-based grading.

“Much of the assessment we do is formative, and we treat that more like practice and skill development,” explained one of the four English teachers who have been making this shift. “So what I’ve found in my classroom is that the kids who might not love English class, or might struggle with it—now instead of seeing a 3 out of 10 on a writing assignment, they see on their rubric that they’re ‘approaching’ the competent level. That has allowed us to have those authentic conversations when we’re doing our conferencing, like ‘Hey, if you just fix these one or two things on the rubric, you can move up into that competent level.’”

“It causes a complete mind-shift, where students don’t just shut down after a couple weeks. Now they understand, ‘there’s no tricks to this—at first we’ll be practicing new skills, and then we’ll assess where you are at the end of the unit.’ And that’s really freeing for a lot of kids. It has kept them in the game. They keep getting a little bit better, and then they’re ready to show how they’ve improved.”

Another teacher said that shifting to formative assessment and competency-based grading is great for the teachers too. “It’s awesome, because you see the lightbulb go off the first time the kid comes up and they think they’re going to get yelled at or told that they’re doomed—and instead they’re amazed that they have the opportunity to improve a few things we discussed and then move up to the next level on the rubric. That’s been pretty awesome.”

The four assessment levels are “Beginning,” “Approaching,” “Competent,” and “Extending.” The district prefers the term “competency” rather than “mastery,” because they feel that “mastery” implies more of an “extending” level, whereas “competency” is a more reasonable expectation for most students on most topics.

The reverse is also true—students who pass summative assessments without doing the formative work could technically advance based on demonstrated mastery. However, no students have done that, and the teachers don’t encourage students to skip the formative work. The summative assessments typically require demonstration of “strategic thinking” or “extended thinking”—the higher levels of Webb’s Depth of Knowledge Framework—and students are typically unable to do that without having completed the formative work. This is a good example of teachers approaching competency-based grading thoughtfully, with a focus on deeper learning rather than a checklist mentality of moving through content quickly and superficially.

The teachers were surprised by how little pushback they received from parents in response to the changed grading system. They communicated clearly with parents at the beginning of the year about the changes and their rationales. They also asked parents to look at the rubrics on Infinite Campus, the school’s learning management system, and they understood that the new approach to grading actually provided more information about their child’s progress than the old approach of letter grades and points. Some parents expressed concerns that the students were putting lots of work into formative assessments that weren’t yielding points toward the final grade. The teachers explained that all of the formative work would lead to a strong summative grade, and most parents were comfortable with the new process.

The teachers are also shifting how they incorporate and assess required content. “We looked at the ‘why’—what do we really want kids to be taking from English class?—and we realized that we don’t need to be grading every single little thing, and we began developing more authentic assessments, whether they were formative or summative. We got rid of a lot of fluff. We got rid of things where we felt, ‘Kids don’t need to know this!’ We don’t need to be devoting a day and a half to literary element terms, and then assessing them with multiple choice quizzes on scantron forms. We can figure out how to do literary element terms within our book clubs, or we can integrate them into a story we read together, which is a more powerful way to learn. These changes reduced what we were grading, because we had gotten rid of so much excess. And we’re giving fewer numeric scores and more narrative feedback, which feels more meaningful.”

Other Posts in the Series: