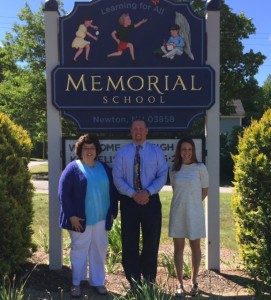 This is the fourth and final article in a series specific to the developing understanding of skills and dispositions of educators working with students in a competency-based educational system. There has been increased recognition nationally of the importance of skills and dispositions and how these are intertwined within the overall growth and College and Career Readiness of learners. The skills and dispositions are referred to in a number of ways (Non-cognitive skills, Habits of Learners, Work Habits, General Learning Outcomes, “soft skills,” etc.). Our school has been delving into skills and dispositions for the past few years, but we have found that there are limited resources to support our work, and at times, this has caused frustration. We were very excited about the opportunity to work with the recently released Essential Skills and Dispositions Frameworks (Lench, S., Fukuda, E., & Anderson, R. (2015)) this upcoming school year to support our continued learning in this area. For the purposes of this series of articles, we will be using the term the State of New Hampshire recognizes, Work Study Practices for skills and dispositions. Locally, we have aligned the Responsive Classroom’s CARES to our State of New Hampshire’s Work Study Practices, which are referenced in this series of articles.

The previous articles in this series may be accessed below:

Article 1: Our School’s Developing Understanding of Skills and Dispositions.

Article 2: Collecting a Body of Evidence.

Memorial School is a Pre-K to Grade 5 elementary school in southeastern New Hampshire, part of the Sanborn Regional School District. As we have made our transition to a competency-based educational model, our recognition of the importance of skills and dispositions has evolved significantly. This evolution in understanding has progressed from our very early days in our journey when we realized that academics and academic behaviors MUST be separated. Today, our teachers recognize the importance of providing time for students to reflect on their own strengths as well as areas for growth within these skills and dispositions. And our growth will continue to evolve, as teachers have begun developing lessons and opportunities for learning for students within their classrooms within these important competencies.

Walking through the classrooms of our teachers this year, there was a palpable difference, but I could not put my finger on precisely what it was until delving deeper into the metacognitive aspect of the Essential Skills and Dispositions frameworks. I realized that it was the students’ self-awareness, their understanding of themselves as learners, that was making a difference in how they approached learning. It truly was reflective of a more learner-centered and personalized approach, and was a powerful catalyst for many of our students.

The insight of two of our teachers below outlines their work with their students specific to developing greater awareness, understanding, and ownership of these invaluable competencies within not only their classrooms but outside of their classrooms and in the greater world itself. Their reflections provide a glimpse into the world of both a first grade classroom and a fifth grade classroom, and describe how students’ increased self-awareness and understanding of how CARES (Cooperation, Assertion, Responsibility, Empathy, and Self-regulation) translate not only within their classroom, but throughout their day as students, friends, and members of their family and greater community.

By March, my primary age students were ready to take their knowledge of CARES to a new level. Let’s recap: Students were introduced to CARES, students dove into each attribute of CARES and made connections within the classroom, and with teacher prompting and encouragement, students began to look for ways to progress in each area of CARES.

In order to help children understand that they will always be using a form of CARES in their lives, we began discussing growth mindset. To help students understand what growth mindset is, I used the visual of a nesting doll. This was a tangible way for students to see growth by moving from a smaller doll to a bigger doll. My purpose was for students to see that they can always continue to improve with CARES.

After this growth mindset lesson, I challenged students to identify an attribute of CARES that they wanted to work on for the next four weeks. Some students chose Assertion and drew pictures of raising their hand more often. Other students chose Empathy and drew a picture of asking others to play with them. As you can see, the actions they chose for modeling their CARES were very age-appropriate.

Once students identified the CARES attribute that they wanted to focus on, I called this their “goal.” I spoke to students on how important it was to set goals and then continually reflect and work on this. Below you will see a picture of a flower. Inside this flower each student wrote the CARES attribute that they were working on. On Mondays, students would write how they are going to work on that CARES inside one of the petals. On Fridays, students would color their petal yellow to represent “Yes, I did this!” or orange if they were “Almost there!” 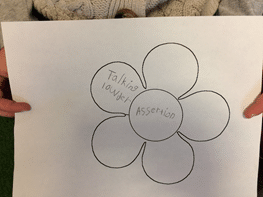 Students filled in their flower petals for four-five weeks. These actions were focused all around goal setting and a growth mindset. Students could visually see themselves improving as a CARES member in our classroom community. As a teacher, it is amazing to see young students taking ownership of their self-improvement along with celebrating their successes.

As we continued to set weekly goals and reflect on them, I became aware that my students were really becoming hyper focused on the bullet points associated with each CARES characteristic. I wanted them to think bigger about CARES and help it become more of an internalized idea, as opposed to just bullet points. I set up each trait on a large piece of paper, without the bullet points, and asked them to go around the room, thinking of each characteristic and what it meant to them throughout their school day. We then talked about each one at Morning Meeting, over the course of the next few weeks, and added to our CARES posters, giving them a better understanding of what the characteristic meant. Their goals became more diverse as they were able to understand CARES on a larger scale. Evidence of this deeper understanding came when one of my students approached me and said, “Mrs. Bolduc, I think I need to use a different CARES in Reading, where I have to be self-directed, than I do in Social Studies, where we talk a lot. So I was thinking our CARES sheet could be broken up by subject area and we could set a goal for each subject area.” Thus, the new iteration of our CARES sheet was born: 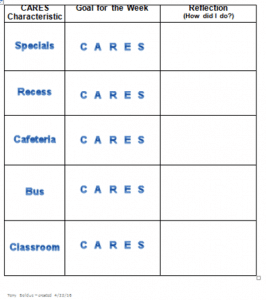 Now my students were setting multiple goals on Monday and reflecting on them each Friday. It was evident that they were really working hard at understanding their own strengths and weaknesses throughout the day. As they became more adept at this level of goal setting and reflecting, I pushed the boundaries one more time. I asked them to set goals in those “unstructured” times throughout their day.

We had some very honest conversations as we talked about using CARES in the lunchroom and on the bus. Both locations gave us ample situations to talk about empathy for others. We were also able to talk about the challenges that arise when we are trying to be aware of CARES and others aren’t. They spoke openly and honestly about how hard it can be to be the only one trying to cooperate as well as being the only student trying to show empathy for the bus driver. Their level of commitment to this work was inspiring.

Nothing was as moving as watching my students complete an end-of-year reflection on their CARES work this year. I had saved all of their goal sheets and passed them back with the single direction of “look at your work and organize your sheets in a way that makes sense to you.” They spent time really reading over their sheets and deciding, each on their own, what they wanted to look at. Some simply organized their sheets by date, while others wanted to organize their sheets by the amount of writing on each one. They had noticed that they really didn’t write much at the beginning, but later had begun to write more and more. I allotted 50 minutes for them to complete the survey. I underestimated their level of depth, as many of them had to rush towards the end to complete their answers. I leave you with some of their responses:

“Working on cares in 5B has changed me. I feel like I became a better person because while you work on cares you really have to be aware of your actions. Also I have became a lot more focused in class using cares.”

“This year everything changed me but changed me in a good way. I feel that when i go to middle school i’ll be ready. Maybe i can teach some other kids about cares too. Like Mrs.Bolduc says: “You can take CARES where ever you go”, and that’s just what i’ll do.”

Jonathan Vander Els is the principal of Memorial School in Newton, NH. Jonathan has presented at multiple local, state and national conferences on topics related to competency-based grading, enhancing teacher leaders in schools, maximizing collaboration of staff through highly functioning Professional Learning Communities, and providing tiered instruction for learners of varying abilities. Jonathan may be followed on Twitter: @jvanderels

Jill Lizier is a first grade teacher at Memorial School in Newton, NH. Jill is an active contributor to Professional Learning Communities within the Sanborn Regional School District. Jill has worked as team leader for her grade level and is currently a Quality Performance Assessment trainer within Memorial School. Jill may be followed on Twitter: @jilllizier

Terry Bolduc is a fifth grade teacher at Memorial School, in Newton NH. Terry has worked as a team leader for her grade level, participates in the PACE initiative as a grade level representative for the Sanborn Regional School District, has been member of the school’s Training Team and is currently a Quality Performance Assessment coach within Memorial School. Terry may be followed on Twitter: @tabolduc