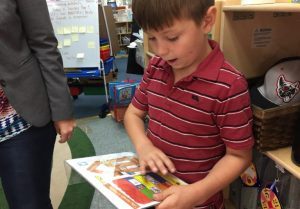 This post originally appeared at Getting Smart on July 24, 2016.

In a world where young people are creators and consumers of media, where they have to navigate thousands of images and advertisements and hidden agendas on a daily basis, we are obligated to equip them to understand and direct their own experiences.

Student agency can become a schoolwide norm through Student Led Conferences. With a little bit of systems thinking and strategic instruction around this practice, Thrive Public Schools has put students in the driver seat.

At Thrive, a blended learning school in central San Diego, parent conferences have been replaced by Student Led Conferences (SLC). At the conclusion of each grading period, students from grades TK through high school led collaborative meetings in which they review their individualized goals around literacy, numeracy and social emotional growth, examine work as indicators of progress toward goal and set next steps.

We know that good facilitation (even for adults) takes preparation and practice. Here’s how students at Thrive prepare for leading conferences on their own work:

In allowing students to lead the conversation about learning, and equipping them to lead those conversations successfully, Thrive teachers like Jamie Pekras-Braun have students who are “beginning to self-monitor and reflect on their progress. They choose their own goals to share with their parents and have a chance to be thoughtful about their strengths and weaknesses.”

Thrive recognizes that SLCs are particularly meaningful for students who wouldn’t naturally elect to be the center of attention.  A first grade teacher, Jamie Pekras, shares that one of her students led his first SLC (his first, first-grade SLC!) at the beginning of the school year.

“It was clear that he was extremely nervous and uncomfortable. He mumbled and read without clarity. He needed teacher support in order to complete the conference. By his third SLC a few short months later, he ran the meeting completely independently. His parents teared up when listening to his confident speaking. Every student is capable of acquiring the skills to speak about their own learning.”

We invite you to visit us at our school site in San Diego, and would love to hear anecdotes from you about Student Led Conferences.