This is the fourth post in a series about the Chugach School District in Alaska. Links to the other posts are provided at the end of this article.

Almost all students in the Tatitlek Community School are Alaska Natives. One of the village elders, David Totemoff, who is also a recent past Chief and Tatitlek Indian Reorganization Act Council President, spoke strongly of the need to promote traditional tribal values and the importance of the school in supporting that effort. The school and the church are the main community centers in Tatitlek, a village of about 65 residents on Prince William Sound that I visited with Mike Hanley, Superintendent of the Chugach School District and former Commissioner of the Alaska Department of Education and Early Development. Two projects from Tatitlek are described below that build community, cultural competence, and community service experience within a competency-based education framework.

Activities to build students’ cultural knowledge are infused throughout the school year, according to Jed and Nichole Palmer, who have been the school’s two teachers for 16 years. The ongoing learning gets a tremendous boost from Cultural Heritage Week, a week of cultural immersion every spring that involves many members of the village as well as students and adults from other schools and districts. The week is called Peksulineq, which means “things are coming to life” in Sugt’stun, the native language of the local Alutiiq tribe.

Peksulineq runs from Sunday to Saturday, with more than 80 students arriving by boat and bush plane (there’s no road access) to join the Tatitlek students, along with chaperones, instructors, and other visitors. From Monday through Friday, the older students rotate through several workshops on topics such as sewing animal skins, beading, dancing, carving wood or soapstone, making traditional kayak paddles or miniature kayak models, and processing salmon or sea lions. Sometimes there are classes in Sugt’stun, which also take place during the school year. The younger students mostly stay with one teacher and do smaller-scale versions of some of those projects, as well as participating in story-telling activities related to local culture. The instructors infuse historical knowledge to help students understand how each activity fits into the village’s culture.

To take fish processing as a project example, the students might catch salmon or start with salmon caught by a village member. Then they go through the process of cleaning, brining, smoking, cutting up, and canning the fish. By the end of the week, the students have canned salmon that they can bring home, give as gifts to people who helped with Cultural Heritage Week, or auction off at the fundraiser that happens at the end-of-week celebration.

In addition to the goal of sustaining Tatitlek’s cultural heritage, the week helps Chugach students fulfill the district’s Culture and Communication standards, which include the following:

Depending on the student’s level, these standards include learning targets such as :

The event’s logistics are complicated. Students are surveyed in the fall to see what topics they’re most interested in. Students are invited from other schools and districts. Instructors are identified—adults with deep cultural knowledge who are retired or able to take the week off and travel to Tatitlek. Every night the school and the church become sleeping quarters, along with family homes, and cooking for more than 100 guests takes place in the school’s kitchen. Financial and logistical support are provided by the Copper Mountain Foundation, a non-profit created by the Tatitlek Corporation, which was established by Congress under terms of the Alaska Native Claims Settlement Act in 1971.

Teacher Nichole Palmer described it as “a week-long cultural intensive” that’s about “the children taking their culture and celebrating it for the week.” The uplifting video below shows the Tatitlek Alutiiq Dancers during the celebration at the end of Cultural Heritage Week 2019. 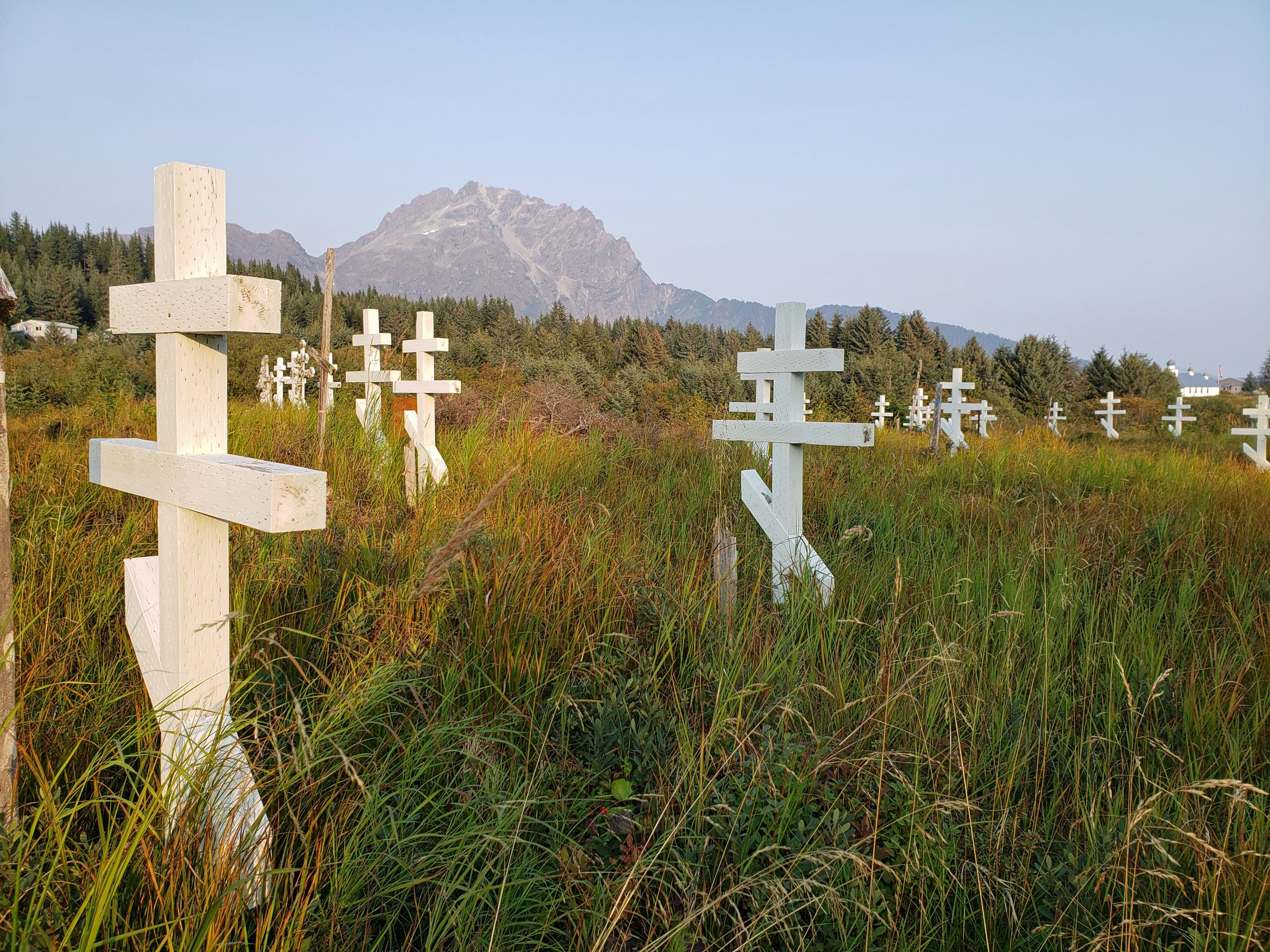 In a project that combined cultural heritage with community service, Tatitlek students and community members completed a major cleanup and rebuilding of the village cemetery. A five-minute walk from the school and the rest of the village, it had become overgrown and was seen as not paying enough respect to the deceased. The village came together to build a gravel path, a wooden walkway, and more than 100 crosses that they installed at each grave. (The Russian Orthodox crosses in the photo reflect the influence of Russian colonization of Alaska Natives beginning in the 18th century.)

As with Cultural Heritage Week, this service project fulfilled both school and community goals, providing an authentic, meaningful learning experience. The Chugach Personal/Social/Service standard includes learning targets such as:

While the details of authentic projects that build cultural competence and sustain cultural heritage will look different in different contexts, these two projects in Tatitlek provide excellent examples to inspire projects in other competency-based schools.