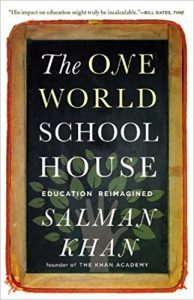 This is the third article on Sal Khan’s The One World Schoolhouse. In the first two articles (read parts one and two), I highlighted the chapters on what is mastery-based learning, how we learn, and filling the gaps.

The second part of Sal Khan’s The One World Schoolhouse is called The Broken Model and contains a thoughtful analysis of why the traditional system is problematic. Before I dive in, I do want to bring to your attention that research by Karla Phillips and the team at the Foundation for Excellence in Education suggest that parents are not interested in the history of the education system, why it is a problem, or even want to think of it as broken. (See the upcoming webinar on April 3, 1 pm ET.) My assumption is that parents, who want the very best for their children, can’t bear the thought that they have put their children in schools that may be broken. The research is that it is much, much, much better to talk about improvement and doing better. That said, I found this section fascinating. I also think understanding the limitations of the traditional system helps educators understand “why” we need to change and the paradigm shift that is demanded. Understanding that the traditional system is flawed makes it clear that the status quo is unacceptable.

I found this chapter helpful in introducing the idea that much of what we do in schools is based on customs and habits. It’s just the way it is done and always has been done. We’ve lost the  the intentions and rationale behind the design. Conversely, in the process of making the transition to competency-based schools, intentionality and alignment became a powerful design principle. If we are going to create new grading policies and practices, what guiding principles are they going to be based upon? If we want to create a transparent architecture of learning, for whom and to what end do we want it to be used?

If you are limited in time you can probably skim this section. I do want to highlight one issue raised in this chapter, that we simply do not spend enough time unpacking the traditional system and could create trouble if we don’t get it worked out in a meaningful way. Khan suggests that Universities and their career-seeking students have a deep-seated contradiction to resolve: On the one hand, our society now views a college education as a gateway to employment; on the other hand, academic has tended to maintain a bias against the vocational. He then goes on to say: Clearly, our universities are still wrestling with an ancient but false dichotomy between the abstract and the practical, between wisdom and skill.

It’s not just at the university level. When we talk about college and career readiness in K-12, the emphasis is always stronger on the college side. I know I’ve done this and continued to do it simply because I can’t figure out how to organize and phrase things in such a way that both career and technical skills are valued as much as college. Furthermore, the critics (and they may be simply oppositional to anything other than traditional models) of competency-based education often include that there is too much emphasis on skills and not enough on content (whether they are suggesting that education should only emphasizes facts or they value concepts and processes has remained unclear to me).

If we are going to be intentional in competency-based education, then we need a clear understanding of what those student success outcomes or graduate outcomes are. Are we going to continue emphasizing academic knowledge and skills over technical skills even though there is substantial evidence that technical skills are highly valued and are going to lead to family-wage jobs? Are we going to continue to act as Khan warns us on a false dichotomy that separates out wisdom and skill?

Where did our education system come from, and who decided that it is going to look the way it does?

Although I’m sure you could go back farther, Khan starts the story of today’s education system in eighteenth century Prussia, where the idea was not to produce independent thinkers, but to churn out loyal and tractable citizens who would learn the value of submitting to the authority of parents, teachers, church, and, ultimately, king. Horace Mann, then Secretary of Education in Massachusetts, visited Prussia and was so delighted with the system, especially in being able to provide a basic education to the stream of new immigrants, brought it to America’s shores in the mid-1800s. Students were organized by age and received the same curriculum for short periods of time, with tests all taken on the same day.

Later, in 1892, the Committee of Ten decided that children 6-18 should have eight years of elementary followed by four years of high school. This committee also decided on the academic disciplines and specific subjects that are important for children to learn. Khan explains, Whether intentional or not, the system tended to stifle inquiry and independent thought.

In an earlier section of the book, Khan also mentions the 1922 Winnetka Plan that sought to develop a flexible approach in which students could be self-paced and receive individual instruction. However, the production of  self-instruction workbooks soon withered away. Khan says it was smothered under the vast weight of educational orthodoxy. However, I would argue that the Winnetka Plan, with its understanding that students are at different points in their learning, simply wasn’t a comprehensive enough concept of learning to be sustained. There is much about the model that isn’t aligned with the research on the science of learning.That’s a good lesson for all of us: Is our idea of personalized, competency-based learning good enough to be sustained, or are we one more step in building understanding of what next generation will eventually be?

The next time mastery learning pops up is in the 1960s, with Benjamin Bloom’s efforts to organize learning to meet students where they are, provide adequate instruction and feedback, and allow students to move forward on their personal pathway, which continue to influence us today.

The chapter on Swiss Cheese learning outlines a number of issues that are important to build into competency-based systems.

This chapter is probably high on the must-read list, as it unpacks how the traditional system sorts and ranks students as well as readies the reader to start to rethink the type of system of assessment we need to be developing. Khan explains the limitations of tests:

He then goes on: What are we actually accomplishing when we hand out those A’s and B’s and C’s and Ds? As we’ve seen, what we’re not accomplishing is meaningfully measuring student potential. On the other hand, what we’re doing very effectively is labeling kids, squeezing them into categories, defining and often limiting their futures… This outcome is actually what the Prussian architects of our standard classroom model explicitly intended. Tests determine who would go to school beyond 8th grade and who would not. This, in turn, would dictate who was eligible for the more prestigious and remunerative professions, and who would be consigned to a lifetime of menial labor and low social status.

I think we need to have a lot more honest talks with ourselves about how the traditional system and many current practices contribute to ranking and sorting students. This includes more emphasis on identifying bias, to whom resources are directed, and which children get the most rigorous engaging learning experiences.

The next section of Khan’s book outlines his vision and rationale for the Khan Academy. It’s definitely very interesting, but I think has less importance for the daily lives of educators transforming their schools and classrooms into competency-based system. In the final article on The One World Schoolhouse, I’ll highlight what Khan suggests the future might hold.