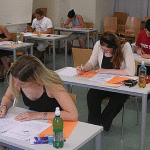 Those of us experimenting with how we accurately measure student skills and abilities hit a wonderful fork in the road the first time we experience the unintended consequences of change. The story goes something like this.

A cool Friday morning as school begins, Mr. Brock is welcoming his 11th-grade psychology class with a casual hello and a smile. As the bell rings, Mr. Brock proceeds through the daily business of taking attendance and fielding quick questions. Prior to that day’s summative assessment, he overhears two students casually conversing.

John, sitting at his desk with his materials strewn in a form best described as controlled chaos is combing through past formative work, open responses, and segments of the textbook he has identified as areas of focus. Diligently checking components off of his preparation list, you can see the hard work and time he put in to preparing for the day’s activities.

Strolling in about four minutes after the bell had rung, Timmy sits down, drops his backpack on the floor, and waits quietly. Noticing the laissez-faire demeanor of his classmate, John leans over and asks a question….“Tim….What are you doing? You don’t want to take the time to review for the summative we are starting in a few minutes?”

Tim, leaning back in his chair a bit more, smiles before replying, “It’s fine. I will just do the retake later.”

….I can feel the color draining from your face now: Not because it is a shock, but because it puts us as the educators in a position of philosophy versus experience. We know that grades are supposed to measure what a student knows and is able to do, but how do we make sure that students are putting in the effort to value the feedback from the assessment without rewarding or penalizing for non-academic instances. Retake policy has become one of the third rails of teacher-led reform, having the potential to limit the acceleration of change many of us are working towards.

In my own practice, I have seen many successes and failures in honing my policies and procedures in the classroom. For those of you still interested, below are my thoughts to help you on the way to an effective practice with stakeholder buy-in that helps juggle the balance between academics and behaviors.

You cannot just implement a policy and hope that it sticks. In the classes that I began, I told students that I was making the changes, which ultimately warranted “what if” questions as opposed to the acceptance I was hoping for. After a bit of stumbling, I began the third period class with a discussion as to why and how we use grades as well as what makes sense to the students, as it is their learning after all. Much of the discussion focused around things like value of the assignment and the meaning of grades. From here, I began to tell a story and asked the “what if” questions myself, allowing for student discovery and buy-in. Needless to say, the later classes’ introductions went much more smoothly

From the start, I had set expectations that were going to have to be met in order to earn a retake. I emphasized that it would have to be earned, mainly, because that is how we capitalize on opportunity in the real world. In developing what would be the base level expectations, I also explained why we would be using them and asked questions about whether they thought it was fair. Using this gained a little more student buy-in for the process while establishing acceptable criteria. Some of the examples I found great success in were things such as completion of all formative work prior to retake, remediation sessions, student contract, and minimum grades to earn a retake (which showed more on the side of effort than ability).

As I observed what was working and what was not through our units of study, I left the ability to scale the opportunities for retakes open on an assessment-by-assessment basis. As the educational experiences themselves were a cycle, I attempted to raise the bar of expectation as we progressed through each unit we studied. Things I saw working, I raised the bar for (increasing minimum grade for retake, having all formative work done ON TIME, etc.), while things that were not working were either revamped or tossed. Ultimately, this adjustment allowed students to increase the effort they put in, since the level of mutual expectation was raised a little bit each time.

The biggest piece of advice I can give is to follow through on the expectations that are set in the environment. No matter who you are or where you are, if policy is not adhered to, it will not elicit the same behavior modifications. If the class set a benchmark, it was adhered to and could be modified only when the cycle was complete. Ownership in the process and knowing the expectations beforehand were great motivators to students. This went a long way in changing the culture and, to this day, has returned a great deal on the original investment needed to start the change.

This isn’t to say that this is the only way to see something like this implemented and adapted. My hopes are that you take some of the lessons I learned and use them in the ways that brings you success. After all, it is only once we find success that we are motivated to succeed. I only hope that we can find that success together.

Justin Ballou is a high-school social studies teacher in New Hampshire. Besides teaching, he is active building/running an education startup called Socrademy, several business ventures, and enjoys spending time with his beautiful wife. With competency-based systems, edtech, and authentic learning as his go-to topics, you can reach him at [email protected] to ask questions or leave comments, and follow him on twitter (@socrademy).