Skip to content
Blogs CompetencyWorks Blog What Does it REALLY Mean to Do Standards-Based Grading? (Part 1) 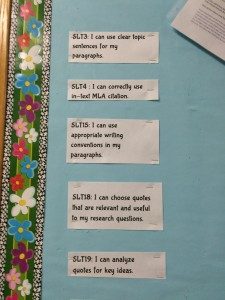 I read a lot of clips about how districts are advancing competency education around the country, and it always seems to me that when there are any negative reactions they are in response to new grading practices, usually referred to as standards-based grading. It strikes me that negative reactions pop up when districts either use grading as an entry point (which puts all the focus on the grading and not on why competency education is valuable) or they’ve put some of the pieces of standards-based grading in place but not the entire framework necessary to make it more trustworthy than traditional grading.

How does a district implement high quality standards-based grading, and when is the right time? I’ll do the best I can to synthesize what I’ve been learning from districts, but please do not hesitate to disagree or add more nuance to these thoughts.

Before I dive deep, allow me to once more review the three types of grading systems using standards (at least that I know about): standards-referenced, standards-based, and an emerging concept of competency-based.

What is the difference between standards-referenced and standards-based grading?

In his book, Formative Assessment & Standards-Based Grading, Robert J. Marzano explains the difference. “In a standards-based system, a student does not move to the next level until he or she can demonstrate competence at the current level. In a standards-referenced system, a student’s status is reported (or referenced) relative to the performance standard for each area of knowledge and skill on the report card; however, even if the student does not meet the performance standard for each topic, he or she moves to the next level. Thus, the vast majority of schools and districts that claim to have standards-based systems in fact have standards-referenced systems.”

The element of standards-based policy that is consistent with competency education is that schools continue to work with students, providing more instruction (not just time) until students reach proficiency. They are not passed on to the next course or teacher unprepared.

Note: I will be honest here. I’ve gotten a little confused about the discussion of standards-based grading, as it still seems to imply the coverage of grade-level standards and kids as widgets going through the factory. Most standards-based grading appears to be based on covering grade level standards and providing instruction that is based on those standards. However, when students are missing important pre-requisite skills this may require them to learn standards at other performance levels. Essentially the emphasis is still on the system, the desired standards, rather than on students. The idea of advance up upon demonstrated mastery is that students are learning the skills that they need for the next level of their studies. This means that we really need to make sure that students have actually mastered all of the foundational skills. Thus, competency-based education is a both/and — we want students to demonstrate proficiency in the standards AND build their pre-requisite skills. (I’ve written about this conundrum in Time to Tackle the Elephant and Meeting Students Where They Are series will continue to do so until we figure it out).

This focus on meeting students where they are also helps to illuminate the problem with solely covering the standards based on grade level. What if the student has a four-year gap between performance and grade level? Given that most schools are covering standards by grade level, do we still expect teachers and schools to work with them before they progress to the next grade level? If a student is learning at a rate of 1.5 performance levels per year that could trigger retention for 2 or more years. That doesn’t make sense developmentally or if a student is performing at or above grade level in all the domains except for one. In personalized, competency-based education there is a third alternative to social promotion or retention. Students have personalized plans with adequate support and trajectories to get them back or close to on track to graduation by 18.

The implications of this understanding of competency-based grading is that we hold this as the North Star – districts can say they are making the transition to competency education, but I don’t think it makes sense to say that they are doing competency-based grading until they have developed the capacity to meet students where they are. Again, this doesn’t mean tracking or sorting students based on their performance levels. It means knowing where students are in their skill levels and designing the most effective strategies to help them build the pre-requisite skills AND meet grade level standards. Our challenge is to became more knowledgeable, and invest in research if needed, about how to most effectively help students make progress.

Note: From what I can tell, sometimes it makes sense  for a student to work at their performance level  and sometimes it doesn’t. There is no reason to believe all learning is linear. The research on learning progressions can inform these instructional decisions. However, as a field we need to become more adept at describing and researching strategies.

Question for all readers: What do you think about this idea of making a distinction between standards-based grading and competency-based grading?

Continue reading about what needs to be in place to do standards-based grading.