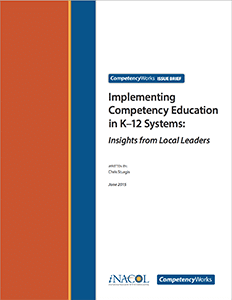 This blog post first appeared on CompetencyWorks on September 19, 2016.

Competency education, an educator-led reform, is taking root in schools and districts across the country. In some states, state leadership has cleared the path with policies to advance competency education. However, districts in Alaska, Arkansas, California, Florida, Georgia, Illinois, and South Carolina are transitioning to competency education with little or no supporting policy. Furthermore, innovative school models are popping up all over the United States, contributing to our knowledge of new ways to organize teaching and learning within a competency-based structure.

Nearly 90 percent of states have created some room for competency-based innovations. The leading states of New Hampshire, Maine, Vermont, and Colorado have started down the path to redesign personalized, competency-based policies and education by re-aligning their systems, creating proficiency-based diplomas, and converting credits to recognize skills learned rather than time in class. Arizona, Connecticut, Iowa, Kentucky, Ohio, Oregon, and Rhode Island have all established enabling policies to create space for districts to innovate. Idaho recently launched an effort with nineteen districts piloting mastery-based approaches. Utah, Nevada, and others are actively studying what it means to have a personalized, competency-based system. Others have created “seat-time waivers” that allow districts and schools to offer competency-based credits.

Districts have been the driving force for the conversion to personalized, competency-based education. Groups of visionary teacher-leaders may introduce competency education into a school, and individual schools within a district may incorporate standards-referenced grading or a competency-based program for over-age and under-credited students. However, there are limits to being able to fully implement a school-wide competency-based system without a district authorizing school autonomy regarding assessments, grading, promotion, staffing, budgeting, and teacher evaluation. It is when the district leadership team, in partnership with school leadership, is humble and brave enough to admit that the traditional system isn’t working, that the foundation is laid for competency education. A systemic approach is the only way to ensure that students can fully advance upon mastery and for robust quality control measures to be established district-wide to calibrate rigor.

This series of posts is based on the paper Implementing Competency Education in K-12 Systems: Insights from Local Leaders, a 2015 release that sought to map out the terrain of the district implementation strategies being used to convert traditional systems into personalized, competency-based ones. These findings were based on interviews and site visits conducted over the past five years as well as the knowledge shared by leaders in the field at CompetencyWorks. In some places, I have updated the text to include additional insights. Because the field of competency education is relatively new, there are no comprehensive evaluations to help us identify promising practices. However, throughout this series of posts, we will highlight issues related to quality and equity that have been raised by those leading the way. These districts have been operating competency-based systems from anywhere between three and twenty years. Their timelines to making the transition from time-based to competency-based have varied depending on where they started, the urgency for change, and the time needed to lay the groundwork with their communities and educators. In general, most recommend anticipating the process of moving through the first three stages at a minimum of five years. All the districts highlighted here emphasize they are still involved in continually improving the design and implementation of the system.

As you read the insights from leaders, it is important to remember that the districts showcased here represent just a handful of all the districts converting to competency education. There are a hundred or more districts in the leading states that have begun the journey to competency education. They are true educational leaders willing to move beyond the traditional, time-based system to create a new system that ensures students learn what is needed to be successful in the next step of their lives.