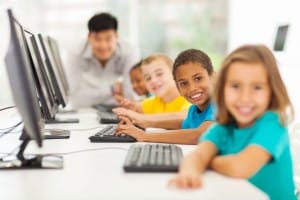 Seat-time, as it relates to earning academic credit and school funding formulas, is a potential policy barrier to advancing highly personalized learning and competency-based education where students should be able to learn any time and any place by demonstrating mastery on rigorous state academic standards and competencies. As far as seat-time relates to per pupil funding models, in most states, these seat-time related funding models which were once major policy barriers to online learning and competency-based education models using “anywhere, anytime” learning models have largely been addressed by state policy makers creating viable alternatives to seat-time through credit flexibility and/or average daily membership funding models.

According to the Carnegie Foundation for the Advancement of Teaching, 42 states have created flexibility for school districts to base academic credit on mastery rather than just seat-time.

The iNACOL report When Success Is the Only Option: Designing Competency-Based Pathways for Next Generation Learning groups state policy approaches to credit flexibility into three categories: waivers, credit flexibility, and redesign.

Waivers allow school districts to request flexibility from state seat-time provisions for awarding credit. The problem with seat-time waivers is that they are a bureaucratic burden for administrators who must file waivers with the state to receive permission for “relief” from seat-time.

Credit flexibility gives general authority to school districts to base credit on factors other than seat-time, such as demonstrated mastery. Credit flexibility is fast becoming the preferred method of state policy makers to allow innovative education leaders to have the flexibility to define credits either by seat-time or by the demonstration of competencies which result in earning equivalent credits.

The vast majority of states provide one of these three credit flexibility policies.

In addition, even in those states that do not offer credit flexibility policies, pioneering school districts, such as Lindsay Unified School District in California, have found ways to work around the California seat-time policies to create personalized, competency-based learning environments in the classroom.  Seat-time policies in California require classroom instruction for 80% of the instructional time, so students are technically limited to out-of-classroom learning of less than 20% of instructional time due to California’s seat-time rules.  Still, Lindsay Unified has a remarkable districtwide competency-based learning model.

The majority of state funding formulas allow for competency–based learning that can occur anytime, anywhere.

The funding formula in 16 states uses Average Daily Membership (ADM) and not seat-time, where students are counted each day that they are enrolled in the district. ADM is more conducive to a competency-based education system than Average Daily Attendance (ADA), as ADA formulas require students to be in their seats for specific amounts of time to generate funding.

Only seven states utilize ADA in their funding formulas.

In the 26 other states (Hawaii is distinct because it operates a single school district), the funding formulas are based on counting students either on a single day or multiple points during a school year. Though not as conducive to competency education as ADM, these methods still provide flexibility for school leaders to implement competency education and anytime, anywhere learning.

Some suggest it is necessary to move to performance-based funding for the majority of schools to become competency-based.

“One might think it is a logical step to move from proficiency-based credits to performance-based funding. However, caution is warranted…First, it is too easy to confuse completion with performance. Second, until we know what it takes to support traditionally underserved students toward [college- and career-readiness], financial incentives for performance, even with weighted formulas, could create incentives for schools to serve some students and not others.”

Most states provide the necessary flexibility in their funding formulas and academic credit policies for school leaders to move forward and implement highly-personalized, competency-based learning environments. States have largely addressed many of the issues related to seat-time, which used to create significant barriers in the past.