Skip to content
Blogs CompetencyWorks Blog A Growing Movement: Behind the Shift to Competency-Based Diplomas

Why We Must Reconsider the High School Diploma 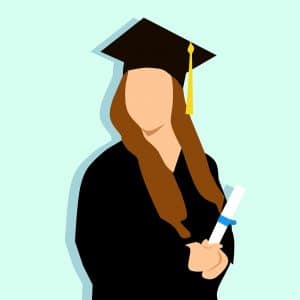 By at least one important metric, American education appears to be making progress. Our high school students are graduating at record rates, and the numbers have been steadily climbing in recent years.[i] However, behind this veil of graduation rates,[1] abundant evidence reveals that we still have a lot of work to do. Compared globally, the US still ranks in the bottom half of the industrialized world in graduation rates, and a sizeable attainment gap persists between whites and minorities.[ii] Among those who do graduate high school and enroll in postsecondary education, nearly half require remedial coursework.[iii] As a result, our college completion rates are alarmingly low—especially for minorities.[2] In fact, only 9.5% of students requiring remedial reading coursework in community colleges leave with a degree, while only 35% in four-year colleges graduate.[iv]

These results pose an especially dire forecast when one considers the increasing importance of postsecondary education. As Jobs for the Future adeptly noted in its 2017 recommendations for the reauthorization of the federal Higher Education Act, “[t]here is a dire need for skilled workers and mounting evidence that postsecondary education has a direct impact on earnings. The shifting needs of the current economy make it clear that to attain real upward mobility, workers will need to be equipped with the education and skills that make them of high value to employers and able to adapt to changes in the workplace.[v]” It is likely the absence of the necessary training and skills that leads two thirds of hiring managers to say they cannot find qualified workers to fill even middle-skills jobs.[vi]

If we are to break the cycle of poverty, particularly among our minority communities, and if we are to ensure the economic welfare of our nation, the American education system must do something about our college matriculation and remediation rates. States and districts must find solutions to ensure that kids are prepared to succeed when they leave high school and not hamstrung with an unemployable skillset.

One such solution that many states are exploring is the competency-based diploma. Though policies differ among the states, competency-based diplomas (sometimes referred to as proficiency-based diplomas) typically discard traditional graduation credit requirements that rely heavily on the number of hours students spend in the classroom, instead requiring that students demonstrate certain competencies before earning credit for a course. Thus, competency-based diplomas create an advantage in that they inherently require individualized attention to each student’s mastery of standards, and they guard against time-based promotion. Only by ensuring that each student truly ascertains the knowledge, skills, and dispositions necessary for postsecondary success can we improve college and career readiness.

The Movement for Competency-Based Diplomas

Maine, Vermont, and New Hampshire fall into the category of states expressly requiring that districts award diplomas based entirely upon a student’s evidence of proficiency rather than awarding credits based on seat time. Vermont provides one of the most comprehensive plans for proficiency-based diplomas, stating that “a student meets the requirements for graduation when the student demonstrates evidence of proficiency in the curriculum outlined in [Rule] 2120.5, and completion of any other requirements specified by the local board of the school attended by the student.” Like other states, Vermont enhances the intended impact of its proficiency requirements by also requiring that every student have a personalized learning plan that fits their needs and interests, and that every student have access to flexible pathways, which include dual enrollment, career and technical education, virtual learning, and work-based learning among other options. Vermont and New Hampshire’s policies are currently in full effect, while Maine’s policy effects current ninth graders but will be phased in gradually, taking full effect in 2024-25.

Colorado, Rhode Island, and Oregon require that students show proficiency in certain content areas or on certain skills before receiving a diploma, but they do not dictate that graduation be based exclusively on proficiency. Colorado, for example, requires only that students demonstrate competency in English and math for graduation. Based on a student’s unique state-required Individual Career and Academic Plan, he or she can choose which assessments to take to show mastery from a state-provided menu of options, which includes ACT Work Keys, ACT Aspire, and AP credit, among others. Meanwhile, Oregon and Rhode Island mandate the use of proficiency for graduation requirements by stipulating that graduates must demonstrate competency on certain skills or in certain content areas; however, students in these states must also meet credit or course requirements, which ostensibly remain dependent at least partially on seat time.

While each state policy is unique, one commonality is that districts—as opposed to the state—almost unilaterally bear the responsibility of determining cut scores for proficiency, with the exception of Colorado (wherein the state predetermines proficiency criteria for many of the optional assessment tools). Districts also typically have great flexibility in the method(s) of instructional delivery and they often have the freedom to establish pathways that are appropriate for each district’s unique educational context. Ultimately, each district is responsible for certifying that its students have engaged in learning that will prepare them for postsecondary success and that they have met the proficiency criteria required for graduation.

Proficiency-Based Diploma Requirements in the States 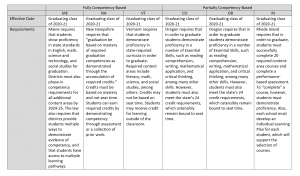 [1] I use the word “veil” because numerous sources have criticized the numbers as misleading, saying that states and districts under pressure have inflated graduation rates by weakening graduation requirements, weakening test scores, and eliminating exit exams altogether, among other evasive strategies.Endnotes

[2] According to the U.S. Department of Agriculture and Economic Research, America’s overall college completion rate is 30%, with figures far lower in rural and economically disadvantaged areas. Among those who enroll in college, the completion rate is 59% for four-year institutions and 31% for two-year institutions, according to the Pathways to Prosperity Network website.

[iii] Research shows that anywhere from 40 percent to 60 percent of first-year college students require remediation in English, math, or both. See Laura Jimenez, Scott Sargrad, Jessica Morales & Maggie Thompson, The Cost of Catching Up. (2016) The Center for American Progress.