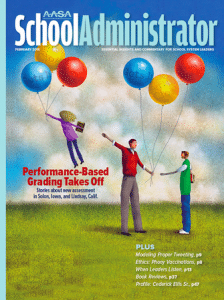 The focus of the February AASA Administrator is on what they refer to on the cover as “performance-based grading” with articles on secondary school grading, standards-based grading and college admissions, and an overview of Lindsay Unified’s change process (a short piece for those who don’t have time to read the book Beyond Reform). Each article is worth reading, and the piece on standards-based grading and college admissions will certainly be helpful for engaging parents who are worried. See article at CompetencyWorks on Grades, College Admissions, and Competency-Based Education

However, I’m very troubled by trying to package the changes to personalized, competency-based systems under changes in grading. It’s simply not a good idea to try to shrink a system-wide change down into a change in grading. As I’ve argued before, we need to make the changes to grading after the “why” has been clarified, the communities have been engaged, and the infrastructure is put into place to support the grading changes. (See part 1 on the different grading strategies and part 2 on what needs to be in place for standards-based grading.) Just moving from A-F to 1-4 is only going to get you into trouble.

What are the principles guiding your grading system? It makes sense to me that districts establish guiding principles and then build the grading system around them. In the article by Matt Townsley from Solon High School in Iowa, the three principles guiding their grading system are: “communicating current levels of learning based on standards; eliminating the influence of practice work on the final grade; and providing students multiple opportunities to demonstrate their learning.” (See Casco Bay High School as well for another example of guiding principles.)

I do think those districts that are strictly standards-based and strictly focusing on academic standards are going to have to think about what it really means to prepare students for the real world after college. It certainly makes sense, depending on roll-out strategies being used, to spend more effort creating the elements of a competency-based system while keeping academic standards as your learning infrastructure for early stages of development.

At some point in time, two other changes are going to need to be made. First, if you separate out academics from behavior, you are going to need to define what those behaviors are and prepare teachers to support, assess, and provide feedback to students. This doesn’t have to be officially scored or accumulated – but there does have to be some type of formal strategy. Otherwise, we are telling students to become effective students without helping them understand how to do so. There are lots of ways of organizing these skills, and it is certainly important to think of it developmentally. (See Building Blocks of Learning, Maine’s Guiding Principles, Vermont’s Transferrable Skills, and New Hampshire’s Work Study Skills.) In the article about Lindsay, they recommend making lifelong learning part of the core curriculum.

The second change is the shift to competencies or the expectations that students are going be able to transfer knowledge and skills to new contexts. This requires mechanisms in schools to be able to instruct and assess at the top of Bloom’s taxonomy, such as using performance tasks and performance-based assessments. I don’t think we’ve talked enough recently about what it really means for a district to focus on competencies and standards rather than depending only on standards in their architecture of learning.

Preparing for parents’ questions. Townsley identifies two of the most frequently asked concerns from parents. One is related to disadvantaging their child in the college admissions process and the other is the idea that standards-based learning isn’t based in the real world (i.e., competition, ranking, and sorting prepare students for the real world). He provides responses that can help teachers and educators prepare for the next parent who walks in the door.

Although all communications are local, I think intermediaries can help by creating a set of FAQs with examples of two or three responses so educators aren’t alone in fielding questions and concerns.

Thanks to AASA for lifting up these conversations. I’m hopeful that they will continue to look at the changes and new capacities needed for personalized, competency-based systems.