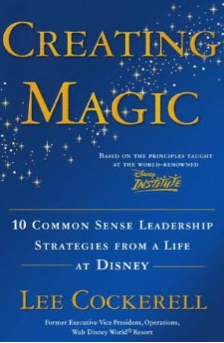 As my responsibility changed from a single classroom, to a team, to the full school, I attempted to be the expert in everything from assessment to ventilation. I assumed I was hired because I had the answers. I also felt responsible to get the work done. How could I ask others to do it if I was not willing to do it myself? The work and the stress piled up. The attempt to be the lone expert in each and every room began to deteriorate my energy, and worse, my working relationships with my colleagues.

Then I listened to Creating Magic by Lee Cockerell, the once Executive Vice President of Operations for the Walt Disney World Resort. He suggested that the higher a person goes in an organization, the less of the actual work they do. He said leaders need to empower their direct reports by giving them a voice in how the job gets done. This allows for the innovative procedures and processes to be created.

Who were my direct reports? Schools are not designed as companies with departments with various levels of management. In my school, there are 61 teachers distributed amongst three grade levels: sixth, seventh and eighth, special education, and our Exploratories, with an assistant principal and a principal. Leadership teams in many schools are often constructed because someone fits a role instead of having leadership abilities. “The third grade representative is leaving, no one is interested, so I am going to do it” is not an uncommon statement. Another is, “Can we rotate the position for the year?” Both of these lead to a lack of consistency needed to build a well functioning leadership team.

I now find the leaders, and then have them assume the role. So my conversations might sound like, “Part of your responsibilities on the leadership team is to check in with the sixth grade teachers and see how they are progressing on our goals.” This also keeps the focus on the goals and the ownership of progress on the teams.

Membership on the team is important, but so is how the team functions. Patrick Lencioni, in his book The Five Dysfunctions of a Team, promotes guidelines to help teams function at a high level so the organization moves forward. As our school implements a competency-based, learner-centered structure, we need our leadership team to function at the highest level possible. We envisioned moving from simply managing the traditional system of education to one that supports students at their readiness level while giving them voice and choice. We also wanted students to apply what they learned instead of just assessing if they knew it. To accomplish this, strong, consistent leadership would be key.

The first dysfunction is an absence of honesty. What culture exists on your leadership team? Culture is not part of the game; it is the game. Henry Cloud in Boundaries for Leadership says, “You get what you create and allow.” It is important that the team members know they can speak their minds and be heard, and trust that if a peer disagrees, it is with pure intentions. I help model this by showing my own vulnerability. It is all right to admit you do not know something or change your opinion in light of new perspectives. I have also forbidden the word “but” in our philosophical discussions. That word can often be used to shoot down an idea without having another to share.

The second dysfunction is a fear of conflict. Too often we shy away from getting into a heated debate. Productive, ideological conflict is a critical component to innovation. The tough ideas need to be discussed. As the leadership team facilitator, it is critical that I look for and draw out the conflict. I watch the other member’s body language and then ask them their view point if they are not sharing it. When given the floor, they often take it. Once conflict is unearthed and professional debate ensues, I praise it and never stop it.

The third dysfunction is a lack of commitment to the goals. This is often brought on by lack of clarity of the goals or because people have not had a chance to weigh-in before they are asked to buy-in. It is critical to use tools and processes to give people a voice and allow the team to push for closure. While it is important to use data, do not let it bog you down. Too often organizations become ensnared in the search for the perfect solution. Voltaire, a French philosopher, is credited with coining the phrase, “The perfect is the enemy of the good.”Beware of the trap. Make a good decision like you mean it, but be ready to change it like you mean it.

The fourth dysfunction is accountability. The members of the leadership team need their primary commitment to be the success of the leadership team. They are not there to act as conduits of information. They should not advocate solely for what their department needs. It should be about creating and preserving the success of the organization. This is difficult because they will feel they are deserting their colleagues. That feeling is lost when the “us versus them” culture is lost.

The fifth dysfunction is not paying attention to results. Results should be checked daily or weekly. The once per year standardized test is not helpful because its occurrence interval is too long to be an effective measure for leadership to use. The team needs to know where they are going (vision),  what you are doing (goals), and how it is working (results). Results are what matter to an organization, and if you are not focused on them, you give others permission to ignore them.

A well functioning team is what any leader needs. Leadership is about inspiring and empowering others to become more then they thought they could. When people feel they are with you, they will work to make the vision a reality.

Nina Lopez is an independent consultant, based in Boulder, CO. Nina provides facilitation, strategy and innovation design services to private foundations, non-profit and government entities in Colorado and throughout the country to help them incubate new initiatives, develop a shared vision and a clear strategy for achieving individual and collective goals. www.ninalopez.com