Skip to content
Blogs CompetencyWorks Blog In Wisconsin, Innovation Does What Budgets Can’t 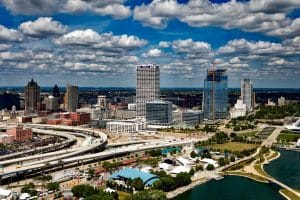 This post originally appeared at the Christensen Institute on March 23, 2017.

It’s budget season in Wisconsin. As in recent years, there is much discussion around tuition rates, state support and maintaining the University of Wisconsin as one of the nation’s premier research universities. But under the radar, the UW System has quietly been innovating against the affordability and workforce challenges faced by the state through a program called UW Flex.

Wisconsin is experiencing a shift from what has historically been heavy employment in manufacturing to jobs that require far more education. But, like many state universities, the UW System has also seen a long-term decline in state appropriations, and tuition has risen in order to pick up the slack in the budget.

Wisconsin faces a challenge: How can the state skill up quickly to meet demand for the new jobs in today’s economy? How can innovation create a college education that is lower cost and accessible, not just to high school seniors, but to working adults who need to retrain?

In order to meet the demands of the 21st-century economy, a team at UW began to experiment with developing a competency-based program. In competency-based education, learning is fixed and time is variable, meaning that students can spend as much time as it takes to demonstrate proficiency and mastery of each competency–and cannot move on until they do. This stands in contrast to a traditional program, in which time is fixed (a semester, for instance), and learning is variable.

Perhaps most importantly for UW leaders, competency-based education can also be designed to align to workforce needs by matching learning competencies to work-based skills and dispositions. Because of their flexibility, these programs can attract students who are older and already working, which allows Wisconsin to help retrain workers displaced by the shift away from manufacturing.

UW Flex was conceived as a collaborative degree, partnering with schools throughout the UW System: UW-Extension provides leadership and operational support to UW Flex programs; in most cases, faculty from other UW institutions develop curriculum, teach in the program, and offer the degree from their institution.

UW Flex established a different revenue model: instead of charging by the credit hour, the program charges a set price for all students, based on a subscription period, during which students have “all-you-can-learn” access to the curriculum. This means that for those students who work through the online program quickly, a UW Flex degree will end up being substantially cheaper. For others, the cost may end up being equivalent to a traditional program.

Today, UW Flex has over 1,000 students pursuing degrees in five programs, with more programs expected to go online over the next few years. UW Flex is meeting its goals on enrollment and retention, growth, new program development, burn rates, and profitability. It also expects to break even ahead of schedule.

Now, UW leaders must wrestle with the potential—as well as the constraints—of the program. UW Flex was never intended to be the sole solution to increasing the number of college graduates in Wisconsin, yet it is a fair question to ask whether UW Flex will grow enough to meaningfully impact the state’s workforce issues.

Structuring UW Flex as a hybrid effort between UW-Extension and other UW schools has advantages. UW Flex draw on the UW’s excellent national reputation and faculty. The System is learning critical lessons in how to structure, support, and market competency-based programs; and, particularly within UW-Extension, it is building processes and priorities that support competency-based, rather than time-based, programs. This groundwork creates choices for the UW System down the line: the System could ultimately build out UW Flex as a standalone program with its own disruptive business model.

Wisconsin Governor Scott Walker’s proposed tuition cut will please students, and his proposal to increase state appropriations to the System by $135 million will likely be a welcome change for the UW System, which has seen state appropriation fall by five of the past six years. But while the flow of funds into the System matters, its future will be shaped as much or more by the innovation happening within it. UW Flex stands to offer lower tuition at a lower cost than traditional programs. Additionally, its competency-based design positions it to address the state’s need for more skilled workers. Budget discussions are zero-sum; innovation can grow the pie for everyone.

Alana leads the Institute’s higher education research and works to find solutions for a more affordable system that better serves both students and employers. In this role, Alana analyzes disruptive forces changing the higher education landscape.