Today, iNACOL released the updated CompetencyWorks map for 2019, a snapshot of K-12 competency education state policy across the United States. The map was last updated in September 2018.

You can download a copy of the map here. 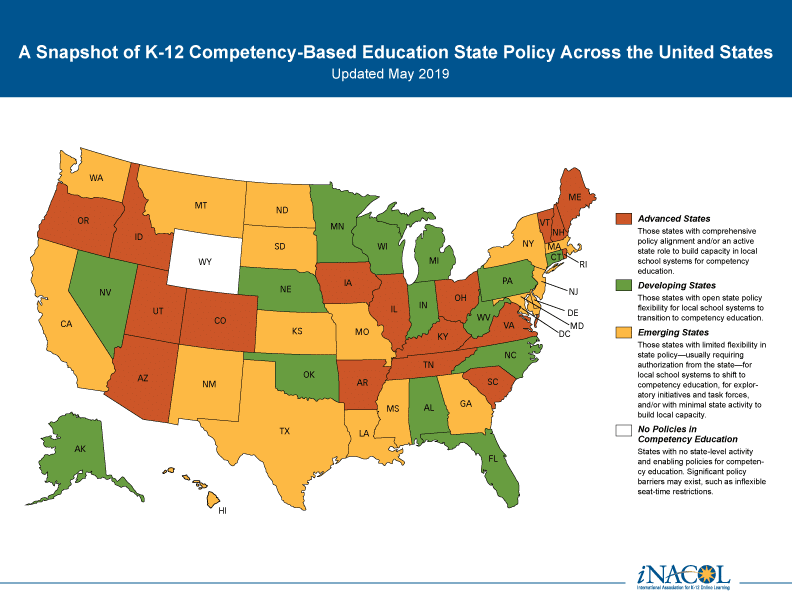 We have categorized the states as “Advanced,” “Developing,” “Emerging,” and “Not Yet” on the map to signify whether the state has permissive, enabling, or comprehensive state policy to advance competency-based education.

“Advanced” means that the state has comprehensive policy alignment or has established an active state role to build educator capacity in local school systems for competency education.

“Developing” means that the state has open state policy flexibility for school districts to transition to competency education.

“Emerging” means that there is limited state policy flexibility and, usually, the state requires authorization for school systems to shift to competency-based education.

Additionally, the 2019 map removes the shading that formerly designated whether a state was a part of the Council of Chief State School Officers’ Innovative Lab Network (ILN), which is phasing out this year.

This month, two states have moved up one category on the map, in recognition of new developments in state policy or leadership that create more conducive conditions for competency education.

California: Moved from “Not Yet” to “Emerging”

California has been considered as “Not Yet” since we began publishing the map in 2012. Despite many examples of innovative practice happening in individual districts and schools across the state, California did not have any policies, regulations, or clear leadership in place to encourage competency-based education statewide. Recently, there have been numerous developments at the state level that signal support for innovative learning models.

As part of its Every Student Succeeds Act (ESSA) state plan, California has implemented a multiple measures accountability and reporting dashboard, the California School Dashboard. The dashboard is notable in that it includes locally defined measures to enable communities to hold themselves accountable for the outcomes that matter most. It also eschews a single, summative rating of school performance to spark more nuanced conversations about school quality and student success. Additionally, California state staff are participating in the Center for Innovation in Education’s State-Level Performance Assessment Learning Community.  Because California meets the criteria of “minimal state activity to build local capacity” through its leadership and engagement in next generation accountability designs and performance assessment, we have moved it into the “Emerging” category.

Michigan: Moved from “Emerging” to “Developing”

Only one state, Wyoming, shows little or no state-level policy activity for competency education. This could signify that there may be significant policy barriers existing in the state, such as inflexible seat-time restrictions.

Since 2012, CompetencyWorks has released an annual snapshot map of the United States, categorizing states into levels at which their policy environments and state activities support competency-based education. 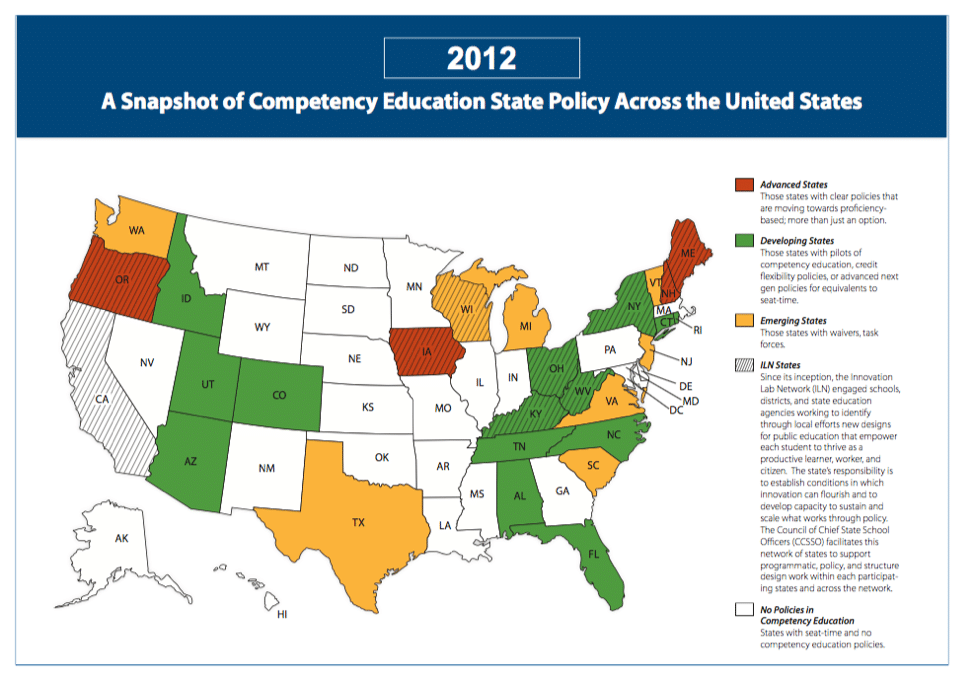 There is a significant trend of states creating policies to support competency-based learning across the country. Most of the work to create personalized, competency-based learning environments takes place within local school systems. However, when there is synchronization between policy and practice and when there is collaboration and partnership between policymakers and local school leaders, widespread transformation can take place. Students can access educational opportunities that will enable them to succeed in higher education, in the workplace and in life.