This is the first post in a series about Del Lago Academy in Escondido, California. Links to the other posts are at the end of this article.

Del Lago Academy – Campus of Applied Science, a high school in the Escondido Unified School District, opened in 2013, just north of San Diego. The 800-student school was launched through energetic efforts of community members and school district personnel seeking a more personalized education than the district’s 2,200-student comprehensive high school offered. A bond issue funded the new school as the district’s student population expanded. Admission to the district’s two high schools is lottery-based and open to all students.

The school has developed and continues to strengthen many competency-based practices aligned with Del Lago’s four core beliefs – personalization, authentic learning experiences, an ethic of excellence, and skilled professional teachers. Principal Ruth Hellams has developed a passion for competency-based education during her three years at Del Lago and is dedicated to advancing the school’s founding vision. (She’s doing her doctoral dissertation on how to sustain alternative education in a traditional system.) The school’s founding principal, Keith Nuthall, created and protected the school’s vision in a way that has enabled it to survive substantial turnover of instructional staff and changes in school and district leadership. 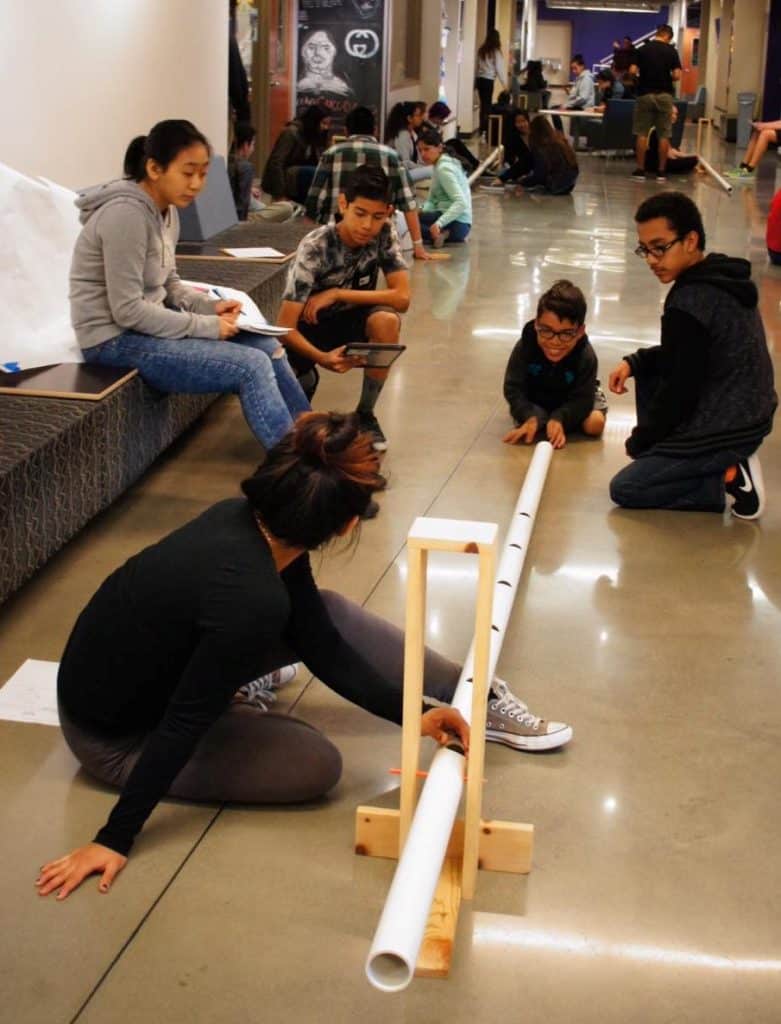 Del Lago’s innovative structures enable important aspects of competency-based education. Students in grades 9-11 are organized in “villages” of about 100 students who move together throughout the school day to the same group of shared teachers, with two villages per grade level. This builds community as students get to know each other well, and it helps teachers work collaboratively to get to know and support students. Twelfth grade doesn’t use the village system because the many individualized course choices and off-campus opportunities available to seniors make it impossible for 100 students to move through the day together.

The village system facilitates Del Lago’s commitment to interdisciplinary projects – a key element of deeper learning and designing for the development of rigorous, higher-level skills, which is one of the quality principles of competency-based education. The school also has a “bell schedule” with no bells, so teachers in village teams can flexibly change the day’s schedule to create an extended block of time for interdisciplinary projects or other learning needs. They make use of this flexibility not only within villages, but also across multiple villages and grade levels when they want a larger pool of students for interest-based groupings.

“Teachers re-roster their students and renegotiate their time within the school day” one teacher explained. “Then you’ll see 220 kids moving around in different ways to different classrooms and parts of the school, and this is just part of the alternative structure – big groups of kids moving but not within the regular bell schedule.” Knowing how bells can snap students out of their focus on a learning experience, Del Lago teachers appreciate not having this distraction.

One 9th-grade interdisciplinary project emerged from students who didn’t like the state’s physical fitness test and developed a project to research and propose a different one. In history class they researched how the current test was created, through the U.S. military in the 1950s. In their science and ENS (exercise nutrition & science) classes they researched which muscle groups were important and how to strengthen them. In English class they wrote materials to recommend a new test and made presentations about it. One group of students who wanted an extended option administered the new test at eight local schools and presented their findings and recommendations at the San Diego school district office and an education conference.

A 10th-grade village did an interdisciplinary project focused on creating a science exhibit for 3rd graders at a local museum. The students studied the 3rd-grade science standards before visiting the museum, then designed and built exhibit prototypes in their Principles of Design class. Third-graders from a local school visited Del Lago to learn from the prototypes, and the museum selected 25 of the prototypes to show at a private event and inform their creation of the final exhibit. The museum also plans to hire some of the students for paid summer internships.

The Principles of Design teacher had the idea for the project and spoke with her village team about how to integrate science, math, and humanities. The team requested a pull-out day because they needed some focused time together to plan the project. Principal Hellams estimated that each village team of teachers has three to four of these pull-out days per year, when substitute teachers take their classes and the team plans collaborative work. This is in addition to other team and professional development time throughout the school year, including village team meetings every other week and monthly late-start days. Teachers in a village also have common planning periods and adjacent rooms with offices between them where they touch base regularly about project planning and student supports. Hellams emphasized that teachers have many touchpoints but also considerable freedom and independence—one of the many features of the school’s design that she refers to as “simplexity.”

The primary purpose of grades is to communicate a student’s level of achievement to all stakeholders, which includes: school administration, the student, his or her parents or guardians, and prospective higher learning institutions and employers.

One might think everyone could agree that the primary purpose of grades is to communicate a student’s level of achievement! But of course we know that’s not how the traditional systems works. The grading practices document then elaborates on the implications of the essential statement. This is an important explanation for all of the stakeholders, most of whom are presumably steeped in the traditional system. For example:

Then the document provides alternative remedies for these challenges, such as “Students who fail to complete assessments have not given teachers enough data to accurately assess his or her ability and must therefore complete the assessment or receive an ‘Incomplete.’” Again, these remedies might sound too obvious to articulate if we didn’t know how much they are at odds with traditional approaches. Given that reality, Del Lago is doing an important service by laying them out in this way.

The school also implements other competency-based assessment practices, such as providing assessments when students are ready. Hellams says, “Our scholars are not bound by time, in the sense that the test is given on the 13th and they have to do it on that day. They have a flexible amount of time to learn the material, and they can take the test if they’re ready, but they can also get a ‘not yet’ and do it later, or do a retake if needed.” She noted that the staff has had many discussions about what retakes should look like and concluded that teachers have discretion to work it out with their students. Rules governing retakes vary across competency-based schools and teachers; many are still developing strategies for retakes that give students flexibility while also taking teachers’ time and capacity into account.

The next Del Lago blog post will focus on their science competencies and micro-credentials.