The mantra, “Fail early, fail often,” needs to die a fast death. This phrase has become the calling cry for many startups over the past few years, and I feel as though it has become the safety net in case a company blows through all its money. I understand the underlying meaning—that setbacks can and will happen on the road to success—but the phrasing is all wrong, especially when it comes to education.

This past week I was at iNCAOL 2014, a K-12 conference full of dedicated and forward-thinking educators, and a big topic was competency-based education (CBE). Michael Horn was a keynote speaker, and this phrase was tweeted and re-tweeted from his presentation: “Fail fast so you don’t have a spectacular failure.”

This is no criticism of Michael, but it struck me as the wrong place to talk about failing as an option. A couple of years ago, I may not have noticed the use of this term; however, after working at College for America at SNHU and now spinning off Motivis Learning, I’ve seen firsthand what negative connotation the “F” word has. (I call it the “F” word because Kate Kazin, the Chief Academic Officer at CfA, has drilled that into the entire team’s head.) We don’t talk about students failing, ever. CfA is a full competency-based program where there is no failing; there is only “Mastery” and “Not Yet.” That simple shift in language can lift the dreary weight of failure off of a student’s shoulders—and trust me, that weight is there.

During my time at CfA I have seen many students start the program with a bag of excuses already in hand to explain why they are not going to succeed. Like the startup companies, they are preparing the safety net to protect themselves in case they “fail” (using the meaning life has taught them).

It’s hard to blame them, since failure is a negative thing to most people. Yet, Thomas Edison understood that there is no such thing as failing. When a toddler takes his first steps, his parents don’t say “he is failing to walk.” They say “he is learning to walk, and it is going to take time.” Edison said the same thing of his own accomplishments: “I have not failed. I’ve just found 10,000 ways that won’t work.” 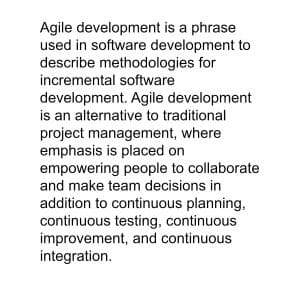 When I started at College for America, we were building the curriculum, the processes, the software, the team…everything from the ground up. We were basically flying the plane as we were building it.

That became our mantra. We never talked about any of our pilots or tests as failing; it was all learning. We learned what worked and what didn’t so we could improve the student experience and improve student outcomes.

This approach of “Learn, Assess, Repeat” in education (and specifically in CBE) creates students who are interested in continuous and lifelong learning. Self-paced progress mixed with a continuous assessment model removes the fear of failing and creates the opportunity for the student to learn at a more personalized level.

Failure truly shouldn’t be an option in education. Even the tiniest bit of success feels great, so should it matter if it took the student one try or four tries?

Our answer is easy: no. The goal is mastery of the material—not just getting by. At CfA, there is no penalty for resubmitting. Rather, we prefer you resubmit and eventually be rewarded with and for mastery. In fact, it is after multiple attempts to get it right that we truly internalize and “know” something in ways that will stay with us.

“Getting by” isn’t working, and education isn’t one-sized fits all—it is one size fits one. Educators have the knowledge, and while many are scared to try something new (probably because of fear of failure), it’s time to “Learn Fast and Adapt” in the classroom. It’s already happening in hundreds of places; it just needs to happen faster and now.

I can promise you WON’T FAIL.

Brian Peddle is founder and CEO of Motivis Learning, the next generation education platform that puts the focus on student outcomes. Prior to that he served as the Chief Technology Office at College for America @ SNHU. During his time with CfA he and his team launched a competency based learning management system and student information system built from the ground up to accommodate the program. The team supported and developed solutions for coaches, evaluators and students as well as helped guide all business processes. The team leverages agile, designs MVPs (minimum viable products), and iterates rapidly from user feedback. Brian’s previous roles include VP of Technology and Development at Jobscience, which builds talent acquisition solutions for social enterprises, and senior software engineering positions at Healthcaresource, Monster.com, and Adobe. Brian has a B.S. from Salem State University.