This post originally appeared on Courtney Belolan’s website on January 20, 2017. Belolan is the instructional coach for RSU2 in Maine.

Have you ever visited a classroom, or a team, or a school, and felt like there was some kind of secret code the members all shared? Perhaps the learners and teachers were using hand signals, or using specific words and phrases which clearly had a meaning that was understood by all the learning community members. The communication took very little effort, and happened quickly and smoothly. Classrooms and schools that have successfully shared and sustained a common language are special places with an environment prime for powerful learning.

Without a doubt, shared language contributes to a positive culture. When a group has special words and gestures that mean something to them, it binds the group together. The benefits of using a common language across classrooms and grades extends beyond culture, into academic learning as well. Common language removes barriers to learning, allowing learners to move between physical spaces without having to move between too many mental spaces. This in turn increases transference of skills and knowledge between contents and disciplines.

For example, a middle school team decided to work on the idea of problem solving with their learners. They had notices that the learners were waiting for the adults to give them solutions in a variety of situations ranging from a broken pencil to deciding what to write about for a story. Rather than have a different process in each classroom, the team decided to use a common set of steps for solving problems. The team also agreed to use the same language and explicitly make the connection between the problem solving steps and their content. 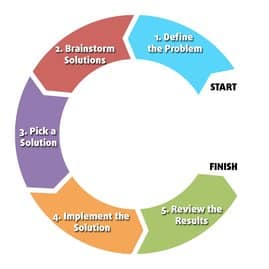 Developing a common language can start small, by addressing one issue as the middle school team did, or in a broader way. One 3rd grade team started off the school year with a set of already agreed upon terms and gestures that they would use throughout the year. They planned as a group for the intentional introduction of the language, and are mindful of growing and sustaining it across the year. The terms included important concepts about attitudes and dispositions, such as compassion and grit. The adults and young learners all participated in creating art and other visuals for the walls and doors that incorporated the common language. On this team, the common language is an essential element of their learner-centered culture. 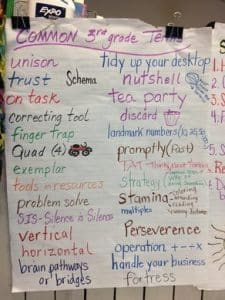 When you are ready to begin developing common language, here are some steps to take with your team of young learners and adults: