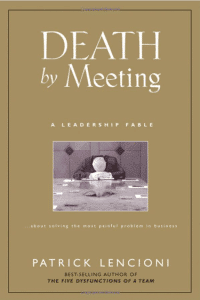 In earlier posts, I described a framework of leadership I believe is needed if the work of converting to a student-centered, proficiency-based system of learning is to be successful. I base my thinking on my own experiences and the tales of leaders gone before. The framework is built around four lenses. They are building a leadership team, action planning (both described in earlier posts), meeting facilitation, and culture. This post looks to further describe the lens of meeting facilitation.

I remember the excitement I felt the night before my first team leader meeting. I laid awake visioning different scenarios of how I should act. I could sit quietly and listen to the experts discuss teaching and learning. I could share some thoughts of my own? What should I share? What do I know? Would I say something stupid and lose their respect? Did I even have their respect? The night went on but sleep did not.

The morning came. I hurried to the meeting carrying my Team Leader Binder under my arm as though I was tasked with delivering the Magna Carta. I pushed the door open and found an empty room. I took my seat and waited. People trickled in like a slow drip from the kitchen faucet. They gave me a cordial smile and took their seats. With one minute to go, the assistant principal entered the room. She did not sit. Instead she stood at the head of the conference table and opened her binder like a maestro getting ready to lead the orchestra. She watched the clock. As the clock struck eight, she began.

“Looking at the agenda, we have picture day next Monday. Any questions?” She glanced around the room, but it was clear she was not looking for any. Instead we moved to the next item. “Grades will close on January 23. Any questions?” With the same interest in hearing input, she moved onto the next item, then the next. When all the agenda items were covered, she closed her binder and said, “See you next week.” Without even looking at the leaders, she vacated the room. The leaders followed, congratulating each other on finishing the meeting in under 15 minutes. I sat in my seat wondering what had just happened.Move forward 15 years. I am now the principal of a middle school in Maine. It was time for my first leader meeting. I spent days creating the agenda in the solitude of my office. I had asked the leaders for agenda items but none were sent. I entered the meeting room and began to dictate the nitty-gritty information from the agenda. Following the meeting, I reflected on the process. I also reviewed the action plans the leadership team created to meet the vision of a student-centered, proficiency-based system of learning. It was clear that the meetings would need to be different if we were to succeed.

The next morning, I bought the book Death by Meeting by Patrick Lencioni. This proved to be what I needed to make my meetings count. In it, he states, “Meetings are not something leaders do; they are the most important thing we do.”

The next leadership meeting we had a different structure, one aimed at tapping the expertise of those in the room and of giving people authentic voice. We hung a piece of chart paper in the room with the goal statements from the action plans the school was focusing on for the year. Since our action plans are not created to dictate step-by-step implementation of a program, but instead are meant to define what would delight our customers, as Stephen Denning suggests in Radical Management, it is important to discuss what is working and what is not. That is what was missing in the nitty-gritty agenda reading format.

Now as the leaders enter the room they grab a colored dot and rate how they feel their colleagues are doing with the goal. A red dot signals serious issues, yellow indicates concerns are rising, and green means “all set”. This process creates the agenda for the meeting. We begin the formal part of the meeting by discussing what impediments are causing the goals to be red. Once we have a cause, we brainstorm solutions and then choose one to implement. By using our goal statements, we are guaranteed to focus our discussion on teaching and learning and avoid spending precious time on conversations of minor issues.

The other shift we adopted from Patrick Lencioni was that the purpose of the meeting dictated its structure. We currently use three types. The first is the one discussed above. We refer to them as our Weekly Tactical. The second type of meeting arises from the tactical. If a goal receives red and the team feels we need to spend an extended period of time discussing and debating a solution, we schedule a Strategic meeting. These meetings will have a set agenda, require some reading and research ahead of time, use a specific protocol for discussion, and last about two to three hours. The third type of meeting is the stand up meeting. Every morning, the math specialist, the literacy coach, the assistant principal, and I meet for five minutes to discuss what we did yesterday, what we will do today, and what impediments currently stand in our way of meeting our goals. These take place in our meeting room so we can reference the chart with the colored dots from the last tactical.

Using this lens, our meetings have focus. The leaders discuss the school’s goals on improving teaching and learning. I am no longer asking the leaders about issues that have little to no controversy or do not require more then a memo. While there is still a need to schedule and discuss the day-to-day operations of the building, it is done in a separate meeting, well outside of the time of my learning and teaching leaders.