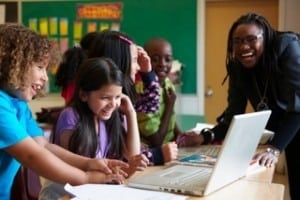 I frankly don’t know where to begin. I was asked to write a blog because I am supposedly one of the few white people in the field of education reform who has successfully diversified their education reform organizations. First of all, I hope this is not true and that there are many white leaders with wonderfully diverse boards and staff. Secondly, while I would agree that I was able to help diversify my organization, the Center for Youth Development and Education within the Commonwealth Corporation, the word “successfully” begs for more explanation.

So here goes.  While I considered myself a radical educator at the time, I frankly had no real clue about white-skin privilege or the reality of racism that people of color face daily in this country. I was the head of a group of approximately twenty professionals in the Boston area, which included four black and brown people.  When I left, the numbers were about 11-11.  But just counting the demographic breakdown doesn’t begin to surface the heart of the issue.

1. I didn’t know what I didn’t know (because I hadn’t experienced it myself). While I had always been politically active, it was from the perspective I had lived, specifically against the Vietnam War and for Civil Rights. In terms of racism, my understanding was more of a concept about the right to equal opportunity and justice than something I lived or intuitively “got.” In my early days at the organization, I remember being called out by a black colleague for what he considered a disparaging remark that I made about a white woman who was questioning whether one of our conferences had too few black presenters. My internal narrative went something like this: “The white critic was being overly politically correct, and doesn’t my black colleague know that my intentions and heart are good.” Reflecting back on this makes me wonder exactly what planet I was living on. At the core of my reaction was white privilege, including dismissing the voices and experiences of people challenging racism. It’s hard to own up to, even today, but I was totally overlooking and undervaluing the daily experiences of my black colleague as he navigated the whiter-than-white world of Boston-based educators.

2. Attitudes among white staff, beyond just me, began to stand out as a problem. So what happened to move me from not owning up to white privilege to beginning to confront it? No single event. Rather it was the growing realization that my life’s passion of being part of the solution to create a more equitable America for our young people was impossible without changing my organization and me. This meant a number of things: diversifying the staff at all levels, redefining all of our work through the prism of social justice, and most important, explicitly embracing an anti-racist strategy. As I began to confront and evolve my own understanding about racism, the attitudes of some of the other white staff began to stand out as a problem. This took many shapes, including subtle opposition as I began an active internal campaign to realign the organization’s mission to explicitly address social justice and anti-racism. Whereas I had previously been impervious to subtle comments about race, I was becoming increasingly aware and upset by my past attitudes. I began to confront subtle forms of racism within the organization. Nearly all of the latter came from a collective cluelessness among the white staff about how white-skin privilege actually operates, rather than malicious intent. But so what since the impact was the same. One example of the “little things” that white staff needed to confront in themselves was when a colleague who considered herself to be quite multi-culturally aware teased an African American colleague about always wearing jackets and ties to work. His response was, “I wear it not because I want to, but because it makes me less of a target for the police.” This might seem a one-off situation. However, we were dragging this cluelessness into our work with schools and children. Could our collective cluelessness mean that we had blinders on in how we were designing initiatives and interpreting student behavior?

3. Once the staff committed to doing internal work around anti-racism, there was no turning back—but it wasn’t easy. The staff came to a consensus that we needed to work with an outside consultant group that specialized in anti-racism training. Once we landed on the firm, the work, often painful, began. Staff confronted each other (sometimes but not always along racial lines), I became frustrated at different points and wondered if I was the right person to lead this effort (and therefore the organization), and many staff of all shades expressed concerns about the effectiveness of the consultants. On top of this was an undercurrent of questions about how to address women’s rights as part of the ongoing conversation.

Despite these simmering issues, at some point in the process the white staff collectively flipped our internal switches. We were internalizing what we were learning, changing our mindsets and behaviors, and beginning to own an anti-racism mission. I’m not sure exactly when or how this happened. But once it did, the fact that the consultant group was far from perfect stopped being a barrier. Hiring a third party was necessary in that it enabled us to have safe internal conversations; but at some point, we were ready to forge our own path. While it was far from smooth sailing over the next several years, we emerged with a new sense of purpose. But not everyone was comfortable with the conversations or the expansion of our mission to include anti-racism; at least not at the same pace. One of our most talented staff members decided to leave. It was only a year later, when she returned, that she told me her reason for leaving was our anti-racism mission. Upon her return, she evolved into probably the leading white advocate for putting our new mission into practice.

I learned many lessons, and continue to learn, but these two stand out for me.

I say all of this not at all as someone who has all of the answers or who hasn’t himself made lots of mistakes. Rather, I am coming from the perspective of someone who is passionate about education as a key tool in the overall fight for equality and justice. And I am tired of seeing the loss of potential – and lives – of so many young people of color. It’s time to shed the white privilege that is getting in our way!