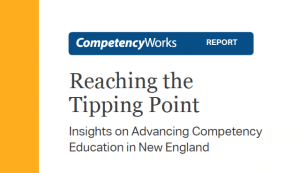 There is so much activity in New England regarding competency education (or proficiency-based or mastery-based) that we thought it would be valuable to take a deeper look to see what we might learn. Today, we’ve released Reaching the Tipping Point: Insights on Advancing Competency Education in New England.

Two other reports were recently released looking at competency education in specific states:

Reaching the Tipping Point opens with an introductory essay, The Every Student Succeeds Act: A Catalyst for Competency Education At Scale?, by Susan Patrick and Maria Worthen that everyone should read. We’ve also taken more time to describe what competency education is, as there continues to be confusion. Then the paper dives into:

In the appendix, readers will find a synopsis of each state strategy, complemented by short case studies of a few districts and schools.

The bottom line: The major lesson learned from New England is that it takes leadership at the district and local levels to venture forth to transform their districts and state leadership willing to create an enabling policy environment with a suite of supports. One without the other will only get us a bit of the way there.

I want to wrap up this post with a great big shout out to Great Schools Partnership, and the New England Secondary Schools Consortium. There is no doubt in my mind that we wouldn’t have reached the tipping point without their leadership, networking, generosity in sharing knowledge, and willingness to jump into those really messy details. Thanks to David Ruff and the whole team at GSP/NESSC.