Skip to content
Blogs CompetencyWorks Blog Say What You Mean, Mean What You Say 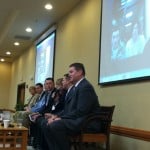 Are we all talking about the same thing when we say competency-based education?  This question first occurred to me this past December when I had the opportunity, as West Wind Education Policy’s program associate, to work with REL Midwest and the Iowa Department of Education to organize the Research to Action Forum on Competency-based Education in Des Moines.  The conference included national experts, teachers, administrators, students, higher education representatives, policy-makers, and Iowa Workforce Development.  You can watch videos of the event and learn more about what is happening in Iowa as districts explore CBE at the online professional collaboration site we created.

During preparatory conversations for the Forum, I was surprised by the many definitions I heard from educators and other stakeholders – from project-based, to inquiry-based, to research-based learning, to simply increasing field trips.  CBE is not new in Iowa; it was the basis of the 2010 Race to the Top Application and is among the priorities listed both in Iowa Governor Branstad and Lieutenant Governor Linda Reynolds’ Administration Recommendations for World-Class Schools[1] and in the Iowa Department of Education’s Blueprint, One Unshakeable Vision:  World Class Schools for Iowa.[2]  In 2011, the Iowa Department of Education released Guidelines for PK-12 Competency-based Pathways.[3]   In addition, recent legislation removed barriers to districts wishing to explore alternatives to traditional seat time and/or the definition of examination and created a Task Force to explore the potential of CBE.

Yet, conversations with Iowans and individuals from districts across the United States taught me that you cannot and should not assume that your definition of CBE is shared by others even in a group of educators interested in CBE reforms.  For example, as I researched districts in Iowa who were exploring CBE and might be able to share their process with others I called a school curriculum director.  She told me about students working online to complete projects and share those with the class.  She described online and project-based learning using the term competency-based education.  Online and project-based learning are often components of CBE, but CBE involves larger reforms to the way we organize and support learning. 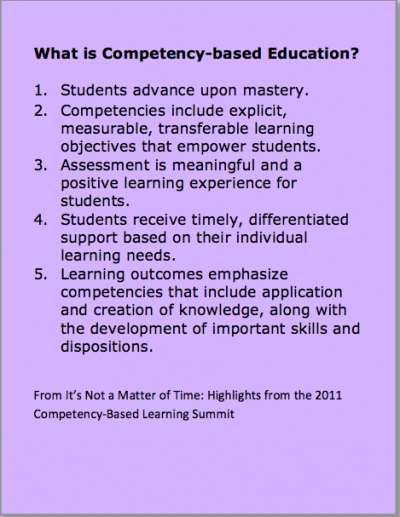 Many times I listened as educators described CBE, giving me examples of students visiting community professional settings such as legal offices and website development firms or doing independent research.  It became clear to me that in order to promote a meaningful conversation at the Iowa event we had to begin with a definition of CBE.  I do not mean to say that we attempted to craft a definition that would describe how CBE always looks in the classroom, but simply to provide a common framework for the discussion.  The same applies to the conversation here at CompetencyWorks and to discussions many of us might have with educators, policy-makers and stakeholders.

Are we saying what we mean and meaning what we say?  And, how does that impact our conversation?  I would love to hear about some of your experiences with definitions of CBE.  Have you heard people describing other types of learning, like project-based or research-based, as CBE?  How have you dealt with the issue of making sure the people you work with or the stakeholder groups like business, industry, parents, etc. have a common understanding of CBE?

ozarth is  Project Associate at West Wind Education Policy, Inc. Before joining West Wind, Mandi served as a policy director for Congressman Brad Carson and as a parliamentary analyst for Dehavill and Information Services in London, where she specialized in education and rural health issues. She later became an analyst for the political consulting firm VR Research and held a position as a program director for UC Berkeley Residential Life, where she organized educational programming aimed at fostering and supporting diverse, multi-cultural and international families.

Mandi holds a Master’s degree in English Studies from the University of London and a BA from Oklahoma State University, and has taken coursework in education from the Open University of Great Britain.