Skip to content
Blogs CompetencyWorks Blog The Power of Grades 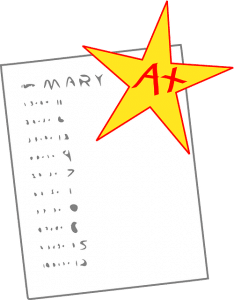 There are few fields where talk of equity is as ubiquitous as it is in education. For all of that, our system of education remains remarkable for its ability to continually reproduce inequitable outcomes along race, class, and gender lines. Up to now, efforts to foster equity in education can be grouped into two broad categories: reforms focused on the input of resources, or those focused on the output of achievement. While debates drag on around the input of funding and output of standardized test scores, what is focused on far less often is what happens inside the system.

Traditional grading deserves its own debate. Every day students interact with a structure of feedback that places their learning on an alphanumeric scale. At best, this feedback system is non-descriptive; at worst, it is one of the most fundamental pieces of a system that was designed to produce stratification. By its very nature, traditional alphanumeric grading aims to separate “strong” and “weak” students. Final grades are made up of an average of any number of learning tasks, attendance requirements, homework completion, and demonstration of learning on assessments. While each of these tasks may well have discrete and useful feedback, all of that information is aggregated into a non-descript label: A, B, C, D, F or 1-100. A grade of B can mean many things even within a single classroom, and so can an F. This lack of clarity grows exponentially between classrooms and more still between schools. While in some classes students are given A’s as a reward for sitting quietly, other classes demand that learning take place, and most demand a unique blend of both, none of this information is explicit in the end-of-course grade. Traditional grading fails to communicate to students what they know and don’t know, while conveying a false sense of objectivity provided by the use of numbers or letters to calibrate student performance.

Rather than providing accurate and complete feedback, grades label students as “good” or “bad” students. While every teacher knows the benefit of momentum — that knowledge builds on knowledge, and success builds on success — traditional grades halt this momentum, declaring learning on a certain task over, signaling the end of what is actually an iterative process. Imagine a student who has studied lots, worked hard, and is waiting eagerly for feedback on her most recent assessment. And then imagine she was wrong; she was unprepared (or the task was unclear, or the grading biased), and she receives a D. Her face falls; she is discouraged, maybe she folds into herself, maybe she withdraws from trying so hard again. This single label has changed her. When a child receives a low or failing grade, she internalizes the message that she is a failure, that she cannot learn. Students who experience repetitive failure are less likely to re-engage with material and eventually come to think of themselves as bad students who don’t deserve to do well. In this way, traditional grading and assessments can be traumatizing for struggling students, creating a learning identity that becomes self-fulfilling prophecy.

The flip side of this phenomenon happens, too — students internalize good grades, and begin to think of themselves as good students, deserving of their success. While students should develop a positive learning identity, the traditional system of grades not only functions on the idea that for some to do well, others must fail (or at least do less well), but it also give students the simplest possible tool by which to compare themselves to their classmates. The idea that “good” students are continually told by the function of their grades that they deserve their position of success allows them to carry that sense of deserving out into their postsecondary life. For all students, grading is a dehumanizing experience whereby their worth and ability are codified in a single number.

Traditional grading aggregates both academic and nonacademic factors into a single score. In this way, two things can happen: a student who has mastered the material of school but not the behaviors being graded is being penalized; and, a student who has not mastered the material in school, but sits quietly, completes work, and doesn’t draw attention to herself will be allowed to move forward with adequate grades. Furthermore, the non-academic behaviors factored into traditional grades may not be neutral or objective. Instead, they are often generated from a dominant perspective and ascribed to students as a means of maintaining control. These behaviours reflect implicit cultural norms around what it means to be a “good” student; sitting quietly, attendance, compliance, following directions, etc. Grading on these behaviors leaves unchecked bias in conceptions/perceptions about innate intelligence/capacity for effort, traditional grading has ensured that “good grades” are unevenly applied across race, class, and gender. All the while, students are internalizing their place in the hierarchy. In this way, grading students on an alphanumeric scale implies and assures a social hierarchy.

One step forward is a move to competency grading. When students are given feedback about what they know and have learned — what skills and knowledge they’ve acquired — school is rendered transparent. Being upfront about what transferable skills students are being asked to master allows for feedback that is clear and focused, that provides students with next steps instead of stagnant labels, and clears the fog around so many academic and personal behaviors that are implicit and often biased. When students are told what they’re being graded on explicitly — “citing evidence” rather than “classroom participation,” or even, “working collaboratively” instead of “classroom participation,” the unconscious bias that even the best educators carry is minimized. Furthermore, when explicit skills are called out, they can be taught rather than simply expected.

Perhaps more importantly, competency-based grading also moves toward eliminating the internalized power positions that traditional grading constructs. No longer are students reduced to a single alphanumeric rank, and pitted against each other, internalizing what it’s been deemed they and their classmates are worth (often based on unspoken expectations for academic and personal behaviors that reflect a dominant perspective). Instead, students see themselves and their classmates as holistic individuals, each with strengths and weaknesses. Each student has an opportunity to develop a relationship with authentic feedback, and they see their grades as earned, rather than given. By assessing students in transparent ways, poisonous power dynamics in classrooms are mitigated. Competency grades flip the script on students as powerless receivers, empowering them with concrete feedback that allows them to continue to grow. Where the label of an “F” on an assessment may stop a student in his tracks, the feedback that a student has “Not Yet” mastered “citing evidence” allows for a path forward, prevents a damaging label from sticking, and humanizes the feedback mechanism of schooling which has traditionally served as a tool to entice students into compliance.