This is the sixth post in the series Reaching the Tipping Point: Insights on Advancing Competency Education in New England. 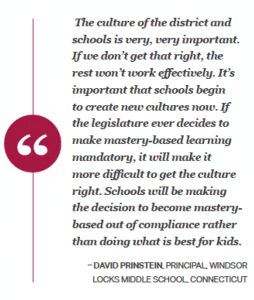 What can we learn about state-level strategies from New England states transitioning to competency-based education? At this point in the evolution of competency education, there are a few solid lessons to be learned from the New England region. It is helpful to compare and contrast the different approaches of the states, looking for powerful insights into the considerations of different strategies and approaches, as this provides deeper understanding and can shine a light on what is the best path for a state. Some states, such as Connecticut, may want to create enabling policies, while others, like Maine, New Hampshire, Rhode Island, and Vermont, will contemplate bolder, more comprehensive steps toward transformation.

However, context matters: considerations need to include public demand and level of public trust, what is already in place, the degree to which districts and schools have already embraced some or all of the elements of competency education, level of consensus among leadership, competing agenda items, and the structural and financial issues that shape schools, such as district consolidations, funding, and political turmoil.

Most importantly, state policymakers and administrators need to hold tightly to a growth mindset. In order to build systems that will create a sustainable competency-based system, we have to believe that educators, education leaders, district leaders, school board members, and state leaders themselves can all learn and build the skills necessary for making the transition.

Post #2 – The Every Student Succeeds Act: A Catalyst for Competency Education at Scale?

Post #4 – The Trouble with Prescriptive Policies When Paradigms are Shifting