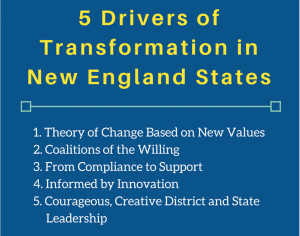 Competency education is advancing in New England through a combination of shared vision and values, mutual respect and collaboration, and courageous leadership that is motivated by a sense of urgency to do better for students, communities, and the economy.

The following five concepts are the core ideas that are driving change in New England at the school, district, and state levels.

1. Theory of Change Based on New Values

These values are used to shape classrooms and the school day, upgrade district operations, and redesign statewide policies and structures. They are also driving the leadership approaches and change process needed to transform schools.

2. Coalitions of the Willing

Working independently, courageous district leadership might have been seen as marshaling unique efforts. However, local collaboratives and regional networks such as the New England Secondary School Consortium amplified the lessons learned, created political coverage, and created avenues for communication with state leadership as well as other stakeholders such as parents and college admissions officers. Thus, the effort in New England to date has been driven through a coalition of the willing.

3. From Compliance to Support

State leadership in these three states has begun to reduce the reliance of the state education agencies on compliance. Instead, they are seeking to provide more support to help create the conditions necessary for transformation. This is an important step in creating a statewide culture of learning and organizational agility so that districts, schools, and educators can be more responsive to students’ needs. To do so requires that state education agency staff become substantially more sensitive to the context in which districts operate and their long-term strategies.

An enormous yet exciting challenge of transitioning to a new architecture for the education system is that no one knows exactly what the new system will look like. The states using goal-oriented strategies create opportunity to be informed by practitioners and establish mechanisms to co-design policies and new processes. For example, New Hampshire has embraced co-design, involving a partnership between the state and districts, as the only way to make sure that any statewide efforts are fully informed and shaped by the insights of the practitioners. The New Hampshire Department of Education creates formal process by which to create the new system, including establishing graduation competencies, work study practices, and the PACE initiative to inform the new approach to assessment and accountability. 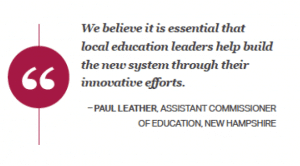 It is unlikely that the New England states would have advanced as far as they have without the extraordinary leadership at the district and school levels. Early innovators helped educators think differently about how to engage students and structure schools. However, it is the communities that demanded that the education system meet the needs of all students. School boards and district leaders have had the courage to respond to this demand, deeming competency education the architecture for modernizing education.

A good example of this type of leadership is found in Connecticut. Enabling policy, Connecticut’s Act for Unleashing Innovation in Connecticut Schools, allowed for credits to be mastery-based but did not require any district to change. Yet two districts, Windsor Locks and Farmington, have made substantial progress toward mastery-based learning because they think it is in the best interest of their students and teachers. Most notably, Windsor Locks has seen significant improvements in achievement in their elementary schools. If and when Connecticut state leadership decides to take the next step toward a comprehensive policy to have all districts become competency-based, these districts and other early adopters will be positioned as invaluable partners. For more information on how these districts are managing the transformational process, please see Implementing Competency Education in K-12 Systems: Insights from Local Leaders.

If there is to be a lesson learned from the goal-oriented strategies used by Maine, New Hampshire, and Vermont, it is that the state policy can set the direction but it is the theory of change and capacity-building strategies that are proving to be catalytic.