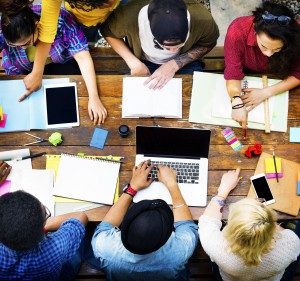 This post first appeared on CompetencyWorks on January 28, 2016. This is the fifth post in the Road Trip to Maine series. The first post is on lessons learned, the second is a look at Richmond Middle and High School, the third looks at meeting students where they are, and the fourth explores moving beyond test scores.

While visiting with President Linda Schott and Provost Ray Rice at the University of Maine at Presque Isle (UMPI), I learned about the Northern Maine Education Collaborative (NMEC), which was formed by seventeen districts to implement proficiency-based learning. Through its partnership with UMPI, NMEC is located downstairs from the President’s Office. Luckily, the stars were aligned and I had a chance to meet with David Ouellette, Director of the Central Aroostook Council on Education and the coordinator of NMEC.

Ouellette is a long-time educator in northern Maine, including having served as a principal. He described the community as “low income and high aspirations. We expect our kids to do well. They may leave to pursue education and jobs. However, we expect them to eventually come back here. This has been the foundation that has enabled us to be progressive in taking the initiative to improve education.”

Ouellette explained that the districts in Aroostook County are very interested in proficiency-based learning but have wanted to let the effort get grounded before they take substantial steps forward. He said, “We have learned that there can be a danger in getting too far out front. Previous efforts such as building new systems of assessments have died of their own weight.”

As he described the collaborative efforts of the seventeen districts in NMEC, it didn’t sound as if they were hanging back at all. In fact, because of the deep commitment to building the system together and with UMPI as a partner, what I was hearing was an intentional strategy that would ultimately create a relatively seamless, countywide proficiency-based system. The NMEC was formed because the districts knew that proficiency-based diplomas are a statewide policy and that there are cost-savings to be found if they coordinate their efforts. Lois Brewer, Assistant Superintendent, RSU 39 and Rae Bates, Curriculum Coordinator, RSU 29 are the co-chairs.

NMEC started by studying proficiency-based learning. They then began to make decisions together about instruction, habits of work, and information systems. Ouellette enthused, “It’s been quite an adventure. How lucky we are! These seventeen districts have come together in this time in history to create a system stretching from PreK-16. They have done some groundbreaking things by making countywide decisions.” For example, they are using the Art and Science of Teaching as a foundation for instruction and evaluation. The districts are all using iObservation to support evaluation and instructional improvement. They are adopting Habits of Mind as a strategy to support students in building the skills identified in Maine’s Guiding Principles. Finally, they are investing in the purchase of Empower (it’s the 2.0 version of the information management system Educate) to track student progress. They are working with the team that created Empower so they can build the local capacity to use its functionality and continue customizing it as needed.

Ouellette explained that he has been changing his opinion about the opportunities and risks connected to rolling out proficiency-based learning at the same time the state is implementing a teacher evaluation program. “Initially, I would have thought it was best to implement proficiency-based education first and then teacher evaluation. But my thinking has been modified slightly in this regard. Proficiency-based education has the most potential to change education since the introduction of Carnegie units. This is important work. We are not moving kids through a textbook any longer. We are moving them through their learning and providing extra support along the way. It’s no longer a secret about what’s important. Teachers, students, and parents are all sharing the same goal.”

Of course, this work isn’t without its challenges, a fact Ouellette acknowledges upfront. “To do this level of deep change in schools isn’t always easy. Thus, if this work is important, then the teacher evaluation should reinforce it. We want all parts of the system to reinforce helping students to learn.” Ouellette also noted that the potential benefit of teacher evaluation is still going to be limited if we aren’t absolutely clear on how to measure student progress.

Additional concerns raised by Ouellette include those about the traditional practices of teaching and assessing students based on their grade instead of their academic level. This point came up over and over again throughout my visits in Maine. With the new flexibility available in the recently passed ESEA, will the state be able to co-construct with districts systems of assessments that support student learning while still being helpful to understand overall how districts, schools, and students are doing (i.e., accountability)?

A third concern raised by Ouellette was the increased pressure on helping students get a diploma. “Before, students could earn credits by showing up. Now they have to really learn. There is going to be increased pressure on high schools to help students build more than four years of skills in order to reach proficiency. There is also going to be pressure on middle and elementary schools to help students get to grade level. Everyone in the system is going to feel pressure, and hopefully this will generate more changes in how we organize schools. We need to be able to teach students at their academic level rather than continuing to teach them standards that they aren’t ready for yet.”