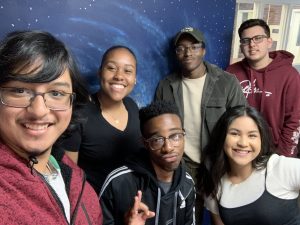 This is the second post in a series about the Da Vinci Schools. The first post is here.

Students at Da Vinci ConnectX in Los Angeles can graduate from high school with a college degree. [Update: DV ConnectX is now called DV Connect] Two differences from most dual enrollment programs are that students can begin taking college courses in 9th grade, and they can earn an accredited bachelor’s degree while still enrolled in high school—although typically at age 19-21. Most dual enrollment programs offer college courses starting in the upper high school grades and offer an associate’s degree but not a bachelor’s degree.

A major impetus for this program was the tremendous number of youth nationally who are starting college but not earning a degree due to a variety of personal and financial obstacles. Only 28% of students who enter a two-year degree program finish within three years, and only 60% who enter a four-year degree program finish within six years. These problems disproportionately affect low-income students and students of color, and they take place in a system where college tuition increases have far outpaced increases in household income and publicly funded financial aid has decreased.[1]

The DV ConnectX program makes it possible for students to save two to four years of college tuition, eliminating a tremendous obstacle to earning a degree. Many of the students are the first in their family to attend college, and completing college courses while they’re still in high school also helps them experience and believe that they can succeed in college-level work.

DV ConnectX began as two separate programs—DV Extension (DVX) and DV Connect—that merged in 2020. DV Extension was founded in 2015 and enables students age 18-21 to complete a two-year associate’s degree, a four-year bachelor’s degree, or college credits that can be transferred to a four-year university. Cohorts of high school graduates, mostly from the Da Vinci high schools, engage in a combination of online coursework and face-to-face instruction through UCLA Extension, El Camino College, and/or the College for America program at Southern New Hampshire University (SNHU). Students also complete paid and unpaid internships and project consults with local businesses, hospitals, and non-profits. School staff provide tutoring, advising, and “adulting” classes such as financial planning. Twenty-nine students in the program have earned associate’s degrees, and 12 students are enrolled in the bachelor’s program.

DV Connect began as the K-8 homeschool support program featured in the first blog post in this series. In August 2019, DV Connect began a pilot program in grades 9 and 10, with students completing their high school requirements while also engaging in the DV Extension college coursework and real-world learning experiences just described. Based on the pilot program’s success, Da Vinci successfully proposed an amendment to their charter this spring that combined DV Connect and DV Extension into DV ConnectX, a kindergarten through college model. They plan to enroll 50 students this fall with a projected growth to 500 students by 2026-27.

Each cohort has 12-16 hours of direct contact per week with staff—a combination of high school teachers and local community college professors—supplemented by remote coursework and a substantial amount of independent work time. Students are able to progress at their own pace, and they benefit from a wide range of academic and social-emotional supports.

“We mapped all of the SNHU degree requirements onto the state high school graduation requirements, and then we’ve taken out the ‘empty calories’ of the high school experience to the extent that the state will allow us,” explained Marc Pioch, Program Leader of DV Extension. He clarified that the “empty calories” are the “filler work” that occupies some of the typical curriculum or school day. He said Da Vinci has developed a rigorous, streamlined process that enables students to work on high school requirements efficiently, thereby creating time and mental space for them to work hard on college completion.

Specifically, earning an associate’s degree from SNHU requires meeting three competencies in each of 20 goal areas, which correspond to 20 courses. Da Vinci crosswalked those competencies with the high school standards, “because there are a lot of pieces that are identical—not even similar, but identical,” Pioch explained. “So why teach one during your Sophomore year of high school, and then wait four more years to get it again in college? … And it’s not just the empty calories, it’s also the physical structure. Why do we need to be in a classroom setting from 8am to 3pm to achieve X amount of work? If a student is able to achieve full competency faster than [the traditional seat-time requirements], that changes the whole game plan.”

I asked what he would say to concerns that are sometimes expressed in education and popular media about the depth of accelerated, blended learning programs. “That’s the old way of thinking,” he said. “It’s not the reality of our world anymore. It doesn’t have to be the reality of our world anymore. And I think that’s the struggle—that it’s so new and so different for people, for all of us who have gone through the traditional system. We say, ‘Well, the traditional way is what works. That’s what got us to where we are.’ But there’s another way. And I think people are honestly afraid of that.”

Taking this argument a bit further seemed like an opportunity for an experienced educator with Pioch’s devotion and Da Vinci’s strong track record to provide valuable perspectives to the competency-based education community and beyond. So I asked how it’s “the old way” to express concern that students might be moving too quickly through courses without sufficient rigor. He said, “I taught in a traditional model for 19 years, and I knew very well that I could teach some of those standards well in a week, but I didn’t have the freedom to do that, because I had to keep the students physically in their desks for a specified amount of time. And so being able to come here to Da Vinci and seeing competency-based learning, and really allowing students to control their own learning—that’s the beautiful part about it, that we don’t limit and restrain students from being able to excel.” He added that students can learn a lot if they’re motivated, interested, and allowed to move ahead at their own speed with strong teacher supports.

Da Vinci Schools CEO Matt Wunder added that concerns about depth can also “work both ways,” because in the traditional system “you can have a lecturer and a textbook, and students can memorize answers for a test and forget the material quickly.” He added that it’s not difficult to convince people that some of the time isn’t used well in the traditional high school model, and that it’s valuable for people to see that students can demonstrate the level of competency associated with an accredited associate’s or bachelor’s degree without having to spend six or eight years in high school and college.

Da Vinci ConnectX is clearly based on the idea that program quality—not program speed—is the essential question. Continuing to understand the relationship between these two dimensions in different school models is essential to competency-based education, where varied pacing is one of the key elements and building models that increase equity are fundamental.