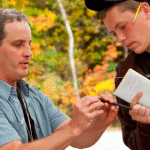 I remember the first time I heard a principal explain, “We try to run our school through dialogue not memo. I work hard to make sure that very few things are communicated through memo.” Trained by the Industrial Areas Foundation in relational organizing, this principal was describing what it takes to operate within a distributed leadership model. I keep thinking about this as competency education expands because I’m not convinced we can make the transition to competency-based instruction by memo. The thing that keeps me up in the middle of the night is seeing competency education corrupted by a compliance-oriented, fixed mindset.

So you understand why I was fascinated by the section on leadership in Making Mastery Work: A Close-Up View of Competency Education. I’ve read it a couple of times and it certainly resonates with what I’ve seen in my site visits around the country.

The authors highlight the dynamics in which “Teacher leadership provided considerable momentum in the institutionalization of competency education practices.” (Interestingly in Section Five they highlight the leadership role of students as well.) The tuning process at Vergennes High School in Vermont in which teachers work together to clarify the benchmarks and what proficiency looks like is described in the report:

At each table, lively conversation ensued. As the day came to a close, there was a collective sense that it had created a powerful launching pad for Vergennes’s learning project. In the following weeks, funds were made available to any teachers who wanted to plan, pilot and validate performance-based projects over the course of the year. The response was enormously positive: 24 teachers— well over half the faculty-—created 36 new tasks, and a group of teachers formed a “Tuning/Validating” committee to review each task, providing feedback and ultimately determining whether the tasks could be considered true measures of competency according to the school’s performance-based graduation requirements. All of this work was undertaken at the teachers’ initiative, and under their own supervision, commitment, and sheer determination. Though the high school principal had to take a long-term medical leave in the middle of the winter, the work continued, gathering momentum as the year progressed.

You can hear this type of leadership as well in the videos produced by Maine – a deep sense of ownership on the part of students, teachers and principals for learning.

The process used in moving from time-based to competency-based has a lot to do with this though.  When you read the case studies from Maine about their early processes, it’s clear that there is something very powerful in dedicating a substantial amount of time for educators, parents and community members to learn about and absorb what it means to be competency-based. There is something incredibly powerful when over 75% of teachers vote to become competency-based.  This is reform through dialogue not “buy-in” or memo.