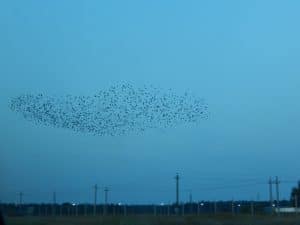 This is the third and final article in an exploration of how to create a culture of learning, inclusivity, and empowerment based on the book The Culture Code by Daniel Coyle. Start the series here.

The implementation strategies used by many of the districts and schools converting to competency education begin with a process of shared inquiry and building a shared purpose. Most leaders will emphasize that it is critically important to fully engage the community in the process of establishing a shared purpose. (See Implementing Competency Education in K-12 Systems: Insights from Local Leaders.)

Coyle uses starlings as a metaphor for how teams work. Starlings monitor the six or seven birds closest to them. Thus, without a leader or formal communication, they are able to move as rapidly as a group. He explains, “The value of the signals is not in their information but in the fact that they orient the team to the task and to one another. What seems like repetition is, in fact, navigation… [High purpose environments] are are about sending not so much one big signal as a handful of steady, ultra clear signals that are aligned with the shared goal.”

Storytelling is an essential part of how leaders embed the purpose into the every day options. The stories send “small, vivid signals designed to create a link between the present moment and the future ideal.” Coyle notes, “We tend to use the word story casually, as if stories and narratives were ephemeral decorations for some unchanging underlying reality. The deeper neurological truth is that stories do not cloak reality but create it, triggering cascades of perception and motivation. Stories are not just stories; they are the best invention ever created for delivering mental models that drive behavior.” Which made me wonder: Are there stories that could help make the paradigm shift from traditional to personalized, competency-based education? Do we need more stories about the limitations and flaws of the traditional system so that it becomes essential not to continue them or accept the status quo?

One example used in this section was based on research of sixteen surgical teams learning a new procedure. It ended up that the those with the greatest learning velocity did five things:

This seems very valuable guidance for the process of introducing personalized learning instructional strategies into a classroom as well as building out the capacities for moderation, assessing and coaching in the lifelong learning skills, and introducing equity strategies such as cultural responsiveness and literacy across the academic domains.

Coyle proposes that there are different ways to lead if you want to build a team that consistently performs well as compared to those that are focused on creating something new. He explains, “When leading for proficiency, it could be called a lighthouse method: They create purpose by generating a clear beam of signals that link A (where we are) to B (where we want to be). There’s another dimension of leadership, however, where the goal isn’t to get from A to B but to navigate to an unknown destination, X.” I’ve been struggling ever since reading this — wondering whether as a field we should consider ourselves still in the process of innovation until we work through all the kinks of personalized, competency-based systems or whether we should be focused more on ensuring that educators can operate as a high performing team with fidelity to the practices. The risk is that the practices may not be quite right. But later on Coyle quotes Pixar’s Ed Catmull, “Give a good idea to a mediocre team, and they will find a way to screw it up. Give a mediocre idea to a good team, and they will find a way to make it better.” Thus, it’s worth paying attention to the techniques for building reliable high quality service.

For those organizations seeking proficiency or reliability, Coyle says leaders turn to heuristics to drive behavior. Heuristics (not a word that I’ve ever used before) are a simple set of rules that allow people to solve complex problems. He uses Danny Meyer, a NYC restaurant owner, as an example of a leadership strategy that depends on heuristics. Meyers has a list of catchphrases to guide employees to make the right decisions in ever-changing contexts. Many of these catchphrases focus on how to respond to mistakes:

Coyle emphasizes “The trick is not just to send the signal but to create engagement around it.”

I began to wonder: What might the simple rules, the heuristics, be for a personalized classroom? I bet, if we put our minds to it, we could collect a list that could guide teachers in meeting students where they are.

Coyle refers to the leaders of innovative teams and organizations as “creative engineers.” Given that “all creative projects are cognitive puzzles involving thousands of choices and thousands of potential ideas, and you almost never get the right answer right away,” it is more important to focus on building the teams and less on the ideas.

Catmull explains, “The goal needs to be to get the team right, get them moving in the right direction, and get them to see where they are making mistakes and where they are succeeding.” He says he can tell how successful a team will be through observation, “You can feel it in the room. When a team isn’t working you see defensive body language, or you see people close down. Or there’s just silence.”

Catmull suggests using a variety of organizational strategies to create interactions among staff. At Pixar, it was dailies, field trips, Brain Trust meetings during film development, taking classes together, and post-mortums after a film is completed. In a school, I can imagine teacher-led seminars or courses, visiting each other’s classes or walk-arounds, annual retreats, and annual collaborative projects. The key is in managing a creative organization to keep the ownership of the project in the hands of the team. If people provide suggestions rather than identifying problems – especially if it is someone higher up in the hierarchy – it is easy for a team to become less empowered. When less empowered, they are also going to be less driven toward discovering a high quality product. Thus Catmull often uses the phrase, “Now it’s up to you.”

Tips for Creating a Shared Purpose

If I was queen of the castle for the day, or had a check from a foundation in my pocket, I’d love to bring together those competency-based schools with the strongest cultures of learning, inclusivity, and empowerment to look through the lens outlined by Coyle. I think it is possible for us to begin to move from the education jargon to catchphrases and language that capture the spirit of competency-based education and help us tell the story to educators, students, parents, and policymakers.