Competency-based education is expanding across the country under a variety of different terms, including mastery-based, proficiency-based, and performance-based. Educators turn to competency-based education when they realize the traditional system isn’t working for many students – and is never going to work for allstudents. Teachers are frustrated by a system that expects them to teach students grade-level standards even if they are missing years of prerequisite skills. Students are frustrated by a system in which some of them are passed along with Cs and Ds, unable to engage in grade-level curriculum, while others endure the boredom of doing seat-time because they already know the content.

For district leaders and policymakers seeking to introduce K-12 competency-based education within their states, there are key questions to consider when looking to begin this transition. Early on in the process, states need to make a few important decisions that will lay the foundation for the rest of their efforts. These decisions make a difference. 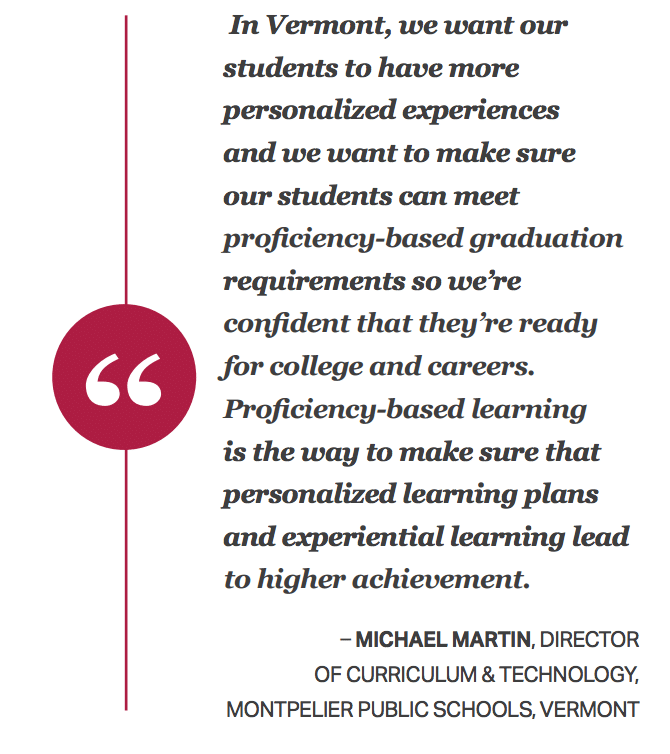 1. How will the vision and direction be described/defined?

States vary in how they describe their vision. Vermont focused on a triad of personalization, proficiency-based learning, and flexible pathways. New Hampshire has stayed focused primarily on a competency-based system with a strong emphasis on creating a balanced assessment system. Maine’s vision was outlined in the strategic education plan and has been communicated as a proficiency-based diploma supported by a standards-based system.

2. What is the theory of change?

What is the underlying theory of change of the state policy? As has been discussed in the earlier section on policy features, states will need to think beyond the specific authorizing policies to consider how to engage districts, schools, and educators in understanding the underlying values, building expertise in personalization and competency-based education, and initiating implementation.

3. What is the implication of the strategy for engaging communities?

Community engagement—not simply marketing an idea and buy-in, but authentic and respectful community engagement—is an essential ingredient for effective implementation. It establishes dialogue and demonstrates respect, which are both important first steps in transitioning from the traditional values to the new values and assumptions that create the necessary culture for competency-based education. When done well, it can catalyze trust-building and create opportunities to experience the new values. It also lays the groundwork to help parents and the community understand why the transition to competency education is important so they are not taken by surprise when policies that are visible to them, such as grading policies, eventually change.

The variations in policy in New England suggest that there are differences in the implications of policies for catalyzing community engagement. The Maine and Vermont strategies assume that the school board will set local graduation policies. Thus, it offers an authentic opportunity to engage communities in the conversation of what they want for their children at graduation. New Hampshire’s statewide strategy to change the credits was more of an internal change, although it had immediate implications for grading in high schools, thereby requiring public discourse. Connecticut’s policy that enabled mastery-based credits was tucked into a much larger bill, thus generating very limited attention.

4. What are the potential implications of the beginning steps toward competency education?

States make early decisions that will shape the rest of their work. Some may start with an entry point of personalized learning or blended learning with the expectation that demand for competency education will take root, while others start with competency education itself. The important step is to pivot the policy to serve all students to meet or excel beyond high standards.

When  starting with competency education, the arguments of why it is important to change are likely to influence the shape of the strategy. Are the state policymakers convinced that the traditional system is in fact an archaic model? If so, the only choice is to require all districts to become competency-based as in Maine, New Hampshire and Vermont. Is the interest to create incentives or space for innovation? Connecticut removed the seat-time barrier to enable those districts that want to move ahead to do so.

The proficiency-based diploma is proving to be a high-leverage policy that gets the attention of districts. However, there will details that need to be worked out at the state level (discussed below). Furthermore, shifting political winds may leave policies vulnerable. Thus, states often build strong partnerships with independent organizations that can expedite the transition process and help to sustain political support.

5. Is it better to focus on one issue or age group, or initiate change throughout K-12?

New Hampshire’s entry point was improving high school graduation rates by converting secondary school credits to be competency-based rather than time-based. As they realized that there was a continuous flow of students coming unprepared to high school, they eventually took the step toward transitioning the entire K-12 system to competency education. The proficiency-based diploma policy in Maine balanced the emphasis on high schools with the call for a standards-based K-12 system. In comparison, Rhode Island continues to be more focused on secondary school, as there is no policy or message that the entire system needs to be transformed. Vermont’s policy is primarily secondary, but is expansive to include high school completion and adult diploma programs within flexible pathways.

Districts tend to determine where they will start the transformation based on where there is a combination of leadership, interest, and either greatest need or opportunity. Thus, some districts have started with elementary and moved up, while others have started with high school and rolled implementation down to lower grades.

6. What will the role of the state education agency be, and what capacity is needed? 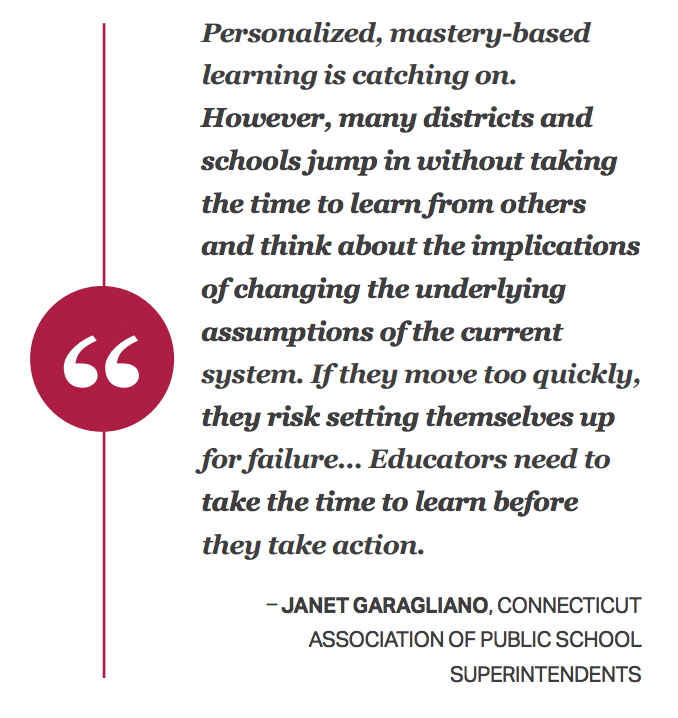 States will want to think carefully about where they position the leadership for the transformational process and how broadly they engage the state education agency (SEA). Will one office have responsibility, or will the chief school officer drive the process through a collaborative process that reaches into the nooks and crannies of the SEA? In New Hampshire, the Department of Education is seeking to turn its primary role to providing support for continuous improvement rather than compliance. The state is adamant that it wants to move beyond the blame-and-shame game to one of continuous improvement. For staff, this may mean having to build adaptive leadership skills, learn how to engage others in dialogue, create processes that enable co-design, and serve as a broker of expertise to expedite the process of districts finding peers that can help them.

7. Who are the key partners?

Even though states can change partners or bring in more at any point, the decisions about the initial partners will shape the flavor, tone, and emphasis of competency-based education within a state. Do the partners have greater expertise in student agency and self-directed learning, instruction, or systems of assessments? All of the states except for Massachusetts have participated in national networks on personalized learning and competency-based education sponsored by the Council of Chief State School, Achieve, or the National Governors Association. Vermont has worked with the Great Schools Partnership in offering the initial training. New Hampshire has partnered closely with the Center for Assessment in designing and implementing PACE and 2 Revolutions in creating the professional development platform. Maine partnered with the Reinventing Schools Coalition (now part of Marzano Research Labs) in the initial stages and engaged Great Schools Partnership to create web-based resources such as policy exemplars for districts. Bea McGarvey has worked with many districts on personalized instruction, and Center for Collaborative Education has provided support in building capacity in performance-based assessment.

Mapping out the organizations that are already operating in your state and comparing them to your capacity-building needs can be helpful in determining if there are gaps and if there are existing partners positioned to operate at a statewide level. It’s possible that the strong state intermediaries don’t have the capacity in competency-based education. Engage them early in the process so they are learning with you, and perhaps they can partner with other organizations outside of the state. The districts that are hungry to move forward with competency-based education, what we term the coalition of the willing, will be helpful in thinking about partners.