Skip to content
Blogs CompetencyWorks Blog Book Review: So You Want to Talk About Race, by Ijeoma Oluo 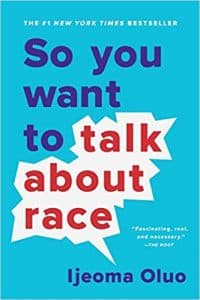 Equity is at the heart of competency-based education, and racism is one of our greatest obstacles to achieving equity. As we engage in the urgent process of deepening our anti-racist understanding and action, Ijeoma Oluo’s book So You Want To Talk About Race (Seal Press, 2018) offers powerful knowledge, insights, and guidance.

In the current moment, when the murders of Breonna Taylor, George Floyd, and so many other Black Americans have been a tragic catalyst for increased attention to the need for fighting racism, the book is an essential resource. (It has recently been #1 on Amazon’s lists ranging from African American Demographic Studies to Human Resources & Personnel Management.)

Oluo explains the basics, then probes the complexities. She respects the reader’s positive intentions by making it clear that she aims to educate but refuses to sugarcoat painful truths. The book is not directly targeted to the education field but is deeply relevant to education. Two chapters—“What is the school-to-prison pipeline?” and “Why are our students so angry?”—are about education explicitly.

The school-to-prison pipeline chapter begins with the story of a Black student who, according to a letter sent by the school, had assaulted two teachers and used his hand to mimic pointing a gun at other students. He was suspended, and a school board member suggested filing legal charges. The student, who had never been in trouble in school before, was five years old. He was having a developmentally normal outburst that warranted empathy, redirection, and a variety of less punitive responses.

Oluo cites statistics that Black students are suspended and arrested in schools at three to four times the rate of white students. She tackles head-on the question of whether this means that “there is something fundamentally wrong with black and brown people.” Unequivocally, she reaches a different conclusion, that “the school system is marginalizing, criminalizing, and otherwise failing our black and brown kids in large numbers.” The book highlights pervasive structural racism as a primary driver of inequity in the United States, with individual racism—implicit and explicit—also playing a deeply harmful role.

The author describes the school-to-prison pipeline as “the alarming number of black and brown children who are funneled directly and indirectly from our schools into our prison industrial complex, contributing to devastating levels of mass incarceration that lead to one in three black men and one in six Latino men going to prison in their lifetimes, in addition to increased incarceration for women of color.” Oluo discusses contributing factors including racial bias of administrators and educators, lack of cultural sensitivity, the pathologizing of Black children, zero-tolerance policies, and increased police presence in schools. The solutions she offers, with explanations and suggestions for each strategy, include confronting schools and school boards about disparate rates of discipline and opportunity, “normaliz[ing] black and brown childhood,” discussing deeper causes of defiant behavior, and challenging the legitimacy of white-centered education.

The “Why are our students so angry?” chapter helps adults see how Black and Brown youth view the country’s racism and other forms of oppression. Students have noticed that “no matter what individual progress we make, no matter how good we strive to be, the system remains” that enables unfair school funding, biased college admissions, and unjust law enforcement. Students see that “no matter how hard they work, and no matter what they accomplish, they could still be in the next viral video as they are gunned down by a cop at a traffic stop.”

With their justified anger, many students are becoming demoralized and disengaged from school. But Oluo notes that other students are becoming activists and independent thinkers, and her language echoes competency-based education’s foundational principle of student agency. Describing a school walk-out and political protest march to city hall by hundreds of students from her son’s school, she shares some parents’ reactions that students should have been “learning instead of protesting.” Oluo disagrees, concluding that the students had been learning, and that was why they were protesting.

“It is my job as a parent,” she adds—and it seems that she’s talking about educators too—“to help give them the platform they need to build their way on, or to smash once they’ve decided it doesn’t work for them. It is my job to keep them safe and support them in the path they choose to take and provide whatever resources I can to that end.” It’s our job to “trust that if we would just stop trying to control them and instead support them, they will eventually find their way.”

Beyond the sections that are explicitly about education, the book will help educators and anyone seeking to deepen their anti-racist understanding and actions, particularly white people. With chapter titles such as “What if I talk about race wrong?,” “Why am I always being told to ‘check my privilege’?,” “What is cultural appropriation?,” and “Why can’t I touch your hair?,” the author packs a tremendous amount of knowledge into a book I couldn’t put down. The final chapter—“Talking is great, but what else can I do?”—offers many ideas for concrete, anti-racist action in addition to those found throughout the book.

One of these calls to action closes the school-to-prison pipeline chapter, where Oluo says that, to her, the biggest tragedy is not the long-term outcomes such as poverty and joblessness. It is “the loss of childhood joy” and that “kids don’t get to be kids.” They don’t get to be rambunctious or exuberant, because those behaviors get them expelled or incarcerated. Her call to action is “Do not wait until black and brown kids are grown into hurt and hardened adults to ask ‘What happened? What can we do?’ We cannot give back childhoods lost. Help us save our children now.”